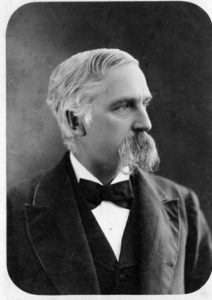 I thought that I’d profile someone a little more palatable – indeed, admirable – this time.

The fellow in this photo to the right looks a distinguished figure; a bank president, perhaps, or a judge, a governor, maybe a college professor.  He is a figure of great dignity and gravitas, indeed.

Well, he was a college professor and a Governor (of Maine), in fact, but that’s the least of his story.  The old man here is Brigadier General Joshua Chamberlain, hero of Gettysburg, one of America’s premiere military heroes, a man who may have single-handedly saved the Union on a fateful day in 1863.

Lawrence Joshua Chamberlain (for unknown reasons he is best known by his middle name) was born on September 8, 1828, in Brewer, Maine, to Joshua and Sarah DuPree Brastow Chamberlain.  A studious and deeply religious child – his mother raised him in a strict Congregationalist household – he was shy and spoke with a pronounced stammer.  His father instilled in the young Lawrence an understanding of the importance of educating one’s self, as well as an abiding interest in military matters.  This was to lead to one of the most remarkable feats of American arms in our history.

As a young man he pursued various occupations including lumberjack (hardly a novelty in Maine) and bricklayer, meanwhile studying Greek and Latin, because lumberjacking and bricklaying are both occupations that give you plenty of spare time for studying Greek and Latin.  At age twenty he entered Bowdoin College, graduating in four years.  Then, perhaps remembering his mother’s insistence on rigid Calvinism, Chamberlain entered the Bangor Theological Seminary.  On his graduation from that institution, however, he declined the ministry and returned to Bowdoin, where he was hired as a professor, teaching Rhetoric and Natural and Revealed Religions.  In 1855, he married his childhood sweetheart Frances “Fanny” Adams, and no, I will not speculate as to the source of her nickname.

Then, in 1862, Chamberlain was to embark on his military career, and it is possible that no other American Army officer has ever led a more distinguished career with so little preparation. 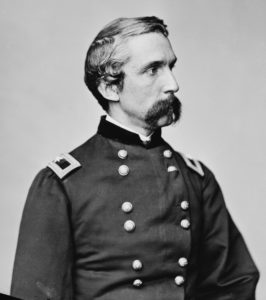 On the outbreak of the war, Chamberlain lectured his students on the necessity of preserving the Union and, being one to put his money where his mouth was, then wrote to the Governor of Maine, one Israel Washburn Jr., “I fear, this war, so costly of blood and treasure, will not cease until the men of the North are willing to leave good positions, and sacrifice the dearest personal interests, to rescue our country from desolation, and defend the national existence against treachery.”  Chamberlain then proceeded to do just that, declining the command of the 20th Maine Volunteer Infantry until, as he put it, he could “start a little lower and learn the business first.”  He didn’t start that much lower, serving first as Lieutenant Colonel of the regiment under Colonel Adelbert Ames.  The 20th was assigned to the 3rd Brigade, 1st Division, V Corps of the Army of the Potomac under the command of Brigadier General Dan Butterfield.  With these men Joshua Chamberlain went to war.

The 20th saw first action at Fredericksburg, where the inept General Burnside ordered repeated attacks against the Confederates entrenched on Marye’s Heights.  The entire mess could have been avoided had Burnside, who despite his impressive facial hair and his invention of a successful breech-loading carbine was only a fair general, allowed one of his subordinates, Winfield Hancock, to cross the river the day before.  Had they done so, Hancock’s men could have occupied the heights before Lee’s men arrived; but that was not to be the case, and so the 20th Maine charged the heights.

The charge of the 20th came late in the day, and like the units before them, they failed to take the heights.  They were still on the long, deadly slope when night fell and the men of the 20th, with Chamberlain in their midst, spent a cold and uncomfortable night using the bodies of slain soldiers as shields from the Confederate bullets that kept probing their lines throughout.  Come morning, they withdrew.

A faulty smallpox vaccine that made much of the regiment ill spared them from the debacle at Chancellorsville, but about this time Colonel Ames was promoted away from the 20th, and Chamberlain ascended to Colonel and command of the regiment.

The next July, Lee invaded Pennsylvania, and the 20th Maine marched towards a little Pennsylvania town called Gettysburg.

To call what happened on July 2nd, 1863 as a one-man war is perhaps a bit of a misnomer.  The entire 20th Maine fought that action, after all, and their commander, Colonel Chamberlain, thereafter, always insisted that credit for their victory on that day properly went not to him but to the regiment.  But the command was his, the responsibility was his, and the decisions were his.  On that day, Chamberlain prevented another Chancellorsville-style disaster and may have saved the Union.

On that fateful morning the 20th Maine was ordered to secure a hill called Little Round Top, which formed the extreme far left of the Federal line.  “You may not withdraw under any circumstances,” Colonel Chamberlain was ordered by his Brigade commander, Colonel Strong Vincent.  Realizing that if his men faltered and lost Little Round Top, the entire Union line could be flanked out and rolled up like a cheap carpet, Chamberlain spoke to his men, ordering them to prepare positions, to pile up rocks, to be ready for a stubborn fight.

The attack was not long in coming.  The 15th Alabama attacked in force, charging up the steep hill several times.  The 20th suffered losses, but for the most part the men fared well in their defensive positions.  As the Alabama men probed for the 20th Maine’s flank, Chamberlain reportedly ordered his left flank to refuse the line, forming a new line at a 90-degree angle to the old. 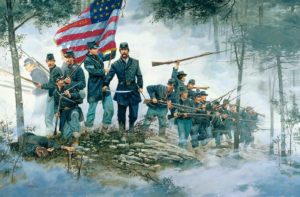 During the fighting, Chamberlain was hit twice, both minor injuries; a bullet struck his sword scabbard, leaving a large bruise on his leg, and a spent bullet hit his boot.

After several charges by the Alabama men convinced Chamberlain that the Confederates didn’t intend to give up, he decided to change tactics.  The Maine men were running low on ammo, and Chamberlain reckoned that charging down a hill beat the daylights out of charging up it, so he ordered his men to fix bayonets.

The 20th fixed bayonets and charged.  As they charged, the left flank wheeled forward like a slamming door, hitting the 15th Alabama’s flank.  In the charge the 20th took over a hundred prisoners, including an Alabama captain captured personally by Chamberlain.

Thus, ended the Battle of Little Round Top and the threat to the Federal left flank.  But while the battle ended that day, the history has stayed with us; when I was a U.S. Army officer candidate in the mid-Eighties, we studied this battle as an example of what thoughtful, courageous and committed leadership can achieve on the battlefield.

The 20th Maine went on to fight at Cold Harbor, Second Petersburg, White Oak Road, Five Forks and Appomattox.  Chamberlain was badly wounded at Second Petersburg, taking a bullet through the hip.  The brigade surgeon predicted he would die, but he survived and, after an extended leave, during which he was promoted to Brigadier General – an honor that was intended to be posthumous – returned to duty.

Because of his well-known bravery and gallantry, General Grant personally named General Chamberlain to accept the surrender of the arms of the Army of Northern Virginia.  Chamberlain, seeing the defeated Confederates lining up to surrender their muskets, raised some eyebrows when he ordered his men to attention, showing respect for a valiant foe.

Thirty years after the Battle of Little Round Top, Chamberlain was belatedly presented with the Medal of Honor for his defense of the Federal flank; the citation described his “extraordinary heroism,” and “daring heroism and great tenacity.”  Fewer citations were delivered with such accuracy.  By war’s end, Chamberlain had served in twenty battles, been cited for courage four times, had six horses shot from under them and was wounded six times.  His biography, The Passing of the Armies, details all these things with much more detail that I could present here. 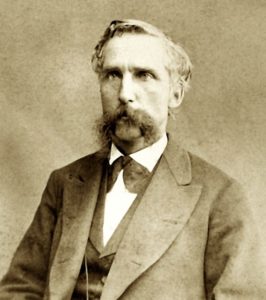 After the war, Chamberlain returned to Maine, where he won four one-year terms as Governor, in 1866, 1867, 1868 and 1869.  He eventually tired of political service and, in 1871, returned to Bowdoin College as President of the institution, a position he held until 1883, when complications of his Civil War wounds forced his resignation.

But a few old wounds weren’t enough to keep Chamberlain at home.  He served as the Surveyor of the Port of Portland, Maine, dabbled in real estate, and even traveled to the West Coast to supervise the building of a railroad.  In 1898, he volunteered for service in the Spanish-American War, figuring that even a seventy-year-old man could serve in some way, but was rejected due to his age and the wounds from which he never fully recovered.

Chamberlain died in 1914, not long before the explosion of the Great War in Europe.

This is a particularly interesting piece for me to write.  The first two men portrayed in this series were remarkable in many ways; W.D.M. Bell was a man of iron courage and endless lust for adventure and possessor of an enormous set of brass balls, while John Johnston was an unsavory, drunken lout who nevertheless was tough, resolute and fearless.

But unlike them, Joshua Chamberlain is one of my personal heroes, and has been since I first read an account of the battle of Little Round Top.  He possessed many admirable qualities, not least among them iron courage.  His is an example that young men today would do well to emulate.

Happy Monday, all. My wife and I are vacationing sans kids for basically the first time in almost three years.…

[caption id="attachment_16392" align="aligncenter" width="259"] Take that, Monday![/caption] I have found out that the old philosophy "work hard, play hard" is…