In the last chapter we discussed ‘Is Libertarianism inherently self-reliant?’ Well, I did anyway, you lot mostly went straight to commenting on the pizza sauce and some sportsball game. This time around let us look at environmentalism. It seems to me that many libertarians and conservatives are dismissive or outright hostile to environmentalism, and I get it… to a point. Environmentalists are generally annoying smug asshats, or annoying filthy hippies. Many of the ‘movement’,or Big ‘E’ Environmentalists are outright commies, hence the watermelon tag. What I don’t get is when this animosity is turned from the people to behavior, actions which in and of themselves are pretty sensible – being frugal, conserving energy, not polluting, that kind of thing. Heck, not long ago four out of the ‘5 R’s of sustainability’ would have made a decent mantra for conservatives. I’m always amused come Earth Day when some redneck proclaims that he’s fixin’ to leave every light in his house on, open all his faucets, let his cars idle in the drive, and burn a pile of tires out back to cap off the evening. I know 90% of that is just bluster, an effort to trigger the green crowd, but I suspect there are a few Bubbas out there angry enough to actually do it. Wasting money and inhaling toxic fumes to own the libs!  Anyway, there is literally tons of waste on a home building/renovation job, I try and do my part. I set aside scrap metal and old fixtures for Big Joe, the local rag and bone man, I keep old windows and cabinets, scrap lumber, sheathing, siding and shingles until I have enough to build a storage shed, and when I come across some old two by four handrails that turn out to be redwood I find a new and exciting purpose for them. 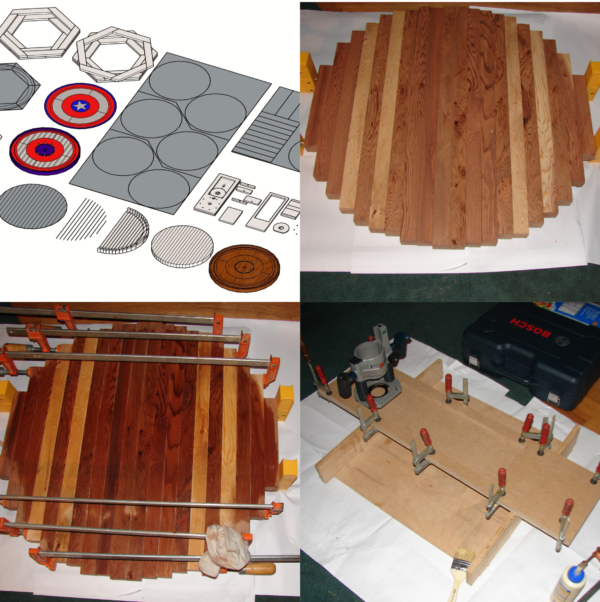 Step 1. (not pictured) Get a job replacing some 2×4 handrails, discover that under the white paint is some beautiful redwood.

Step 2. Recall the game that Nephilium mentioned a while back, do some design work and determine that with careful resawing you have just enough material to make two crokinole boards.

Step 3. Select the best looking sides and layout and glue up the ~2×2’s into blanks.

Step 4. Build a jig for your router, you could of course use a store bought circle jig, but I wanted mine to also be a template for the peg holes and to use it as a guide for the straight lines as well 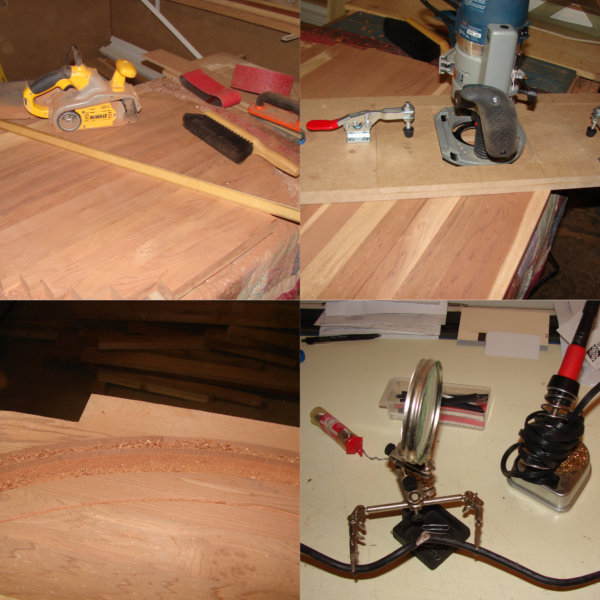 Step 5. Wish you owned a 32″ drum sander (or any drum sander) and attempt flattening the blanks with your belt and disc sanders.

Step 7. Marvel at how well your jig is working, start round and rounding too fast and have an accident.

Step 8. Off to the soldering iron and the shrink tubing 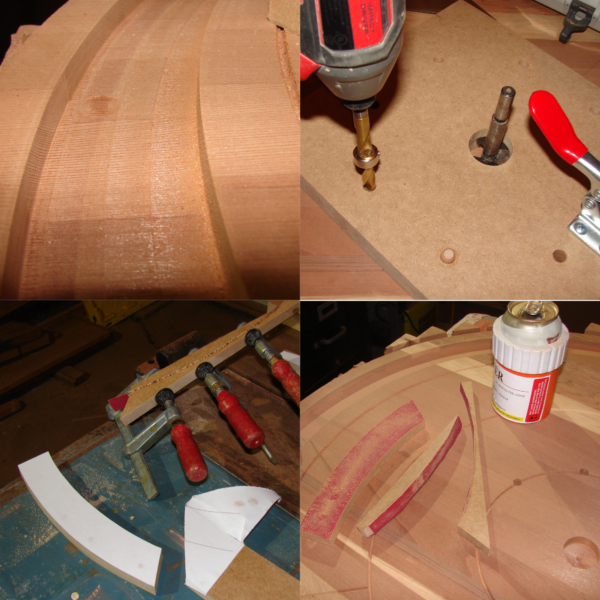 Step 9. Get back to routing.

Step 11. Glue sandpaper onto curved pieces of wood for some custom sanding blocks. 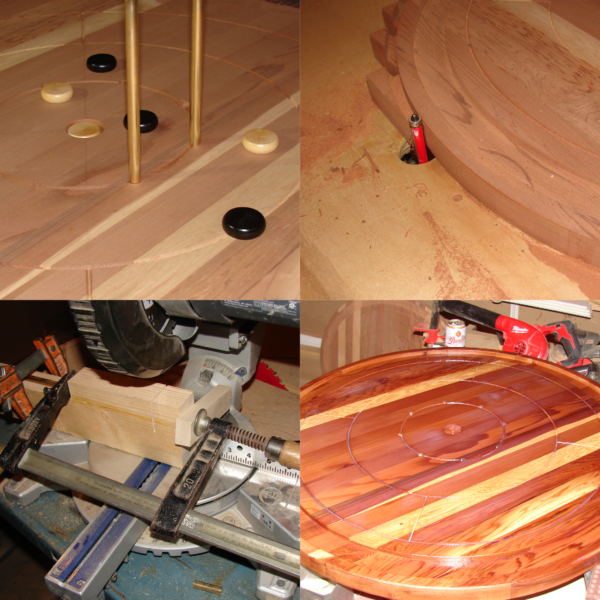 Step 13. Take time out to test drive your new game board.

Step 14. Use a flush cutting bit to trim excess.

Step 15. Make another jig to hold and cut brass pegs to size. 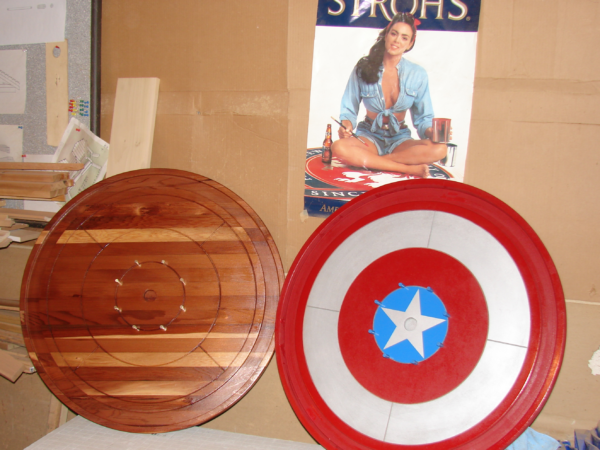 As you can see I also built a ‘Murica!! themed board for my Jarhead bother, I made it out of MDF  built up in several rings to save material, which also allowed me to have the outermost lip higher than the playing surface which is a better design than the redwood ones, where sometimes over-shot or ricocheting biscuits will fly off the table instead of into the ditch. Since then I have built one out of standard pine 1×6’s for the frame and birch plywood for the top. I integrated storage for the biscuits on the underside. 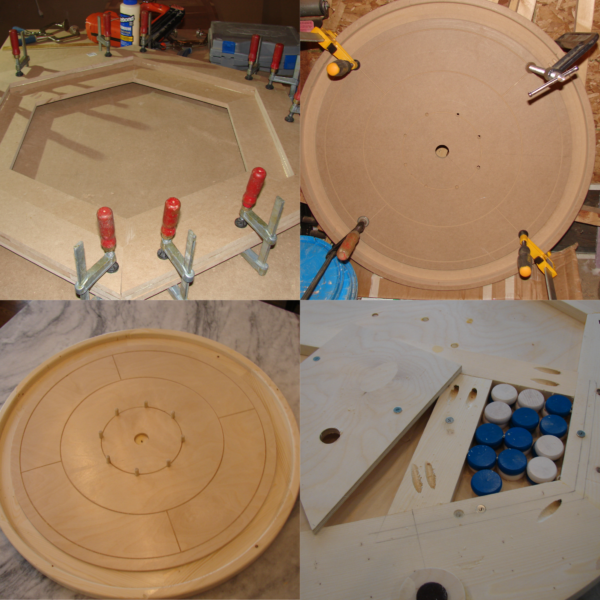 You may want to customize your tops and due to the circular nature of the playing surface one might be tempted to use any number of the many sports team or popular product logos that are often circular as well. Don’t do that, it would violate copyrights, and IP law. But don’t let that curb your creativity, for example, I made this one for the Ubs family, with a cherry frame. I inset the storage area lid which I also made into a scoring peg board. Currently I’m working on a mahogany frame and still have a blank playing surface, I wonder what I should put on there? 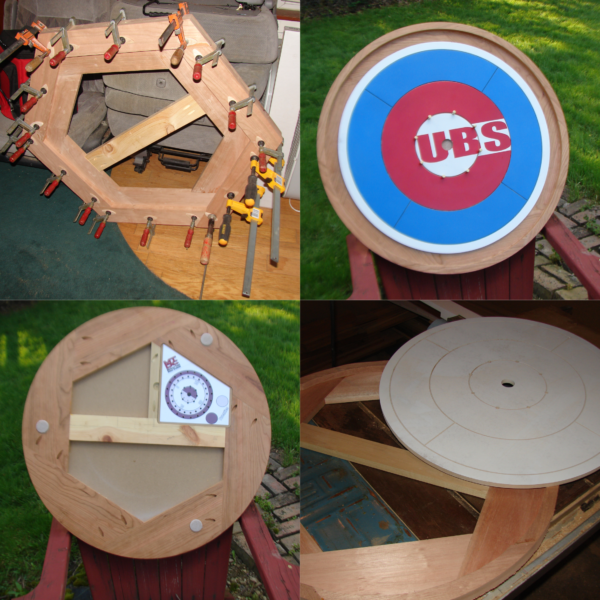 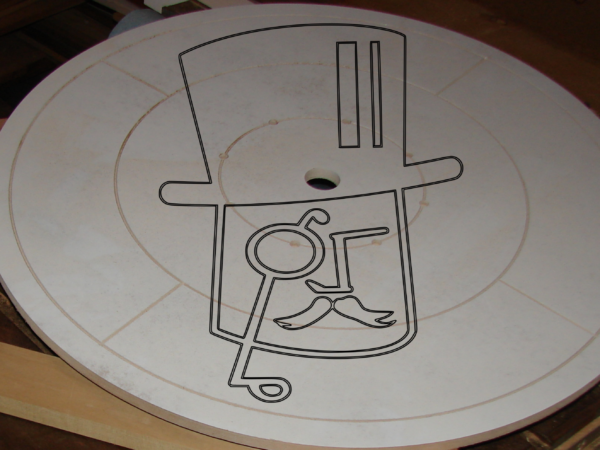