One Sunday afternoon I received a call from an unknown number.  It was a local number so I answered it, as many of scam calls come from a 323 area code (CA).  I probably shouldn’t have done that, because the lady on the other line wanted to convince me to vote against Prop 105. Is this a local issue?  Yes, but quite frankly I have a platform for free speech and damnit, I’m going to use it….

This is my review of Four Peaks Golden Lager…a refreshingly local Pilsner. 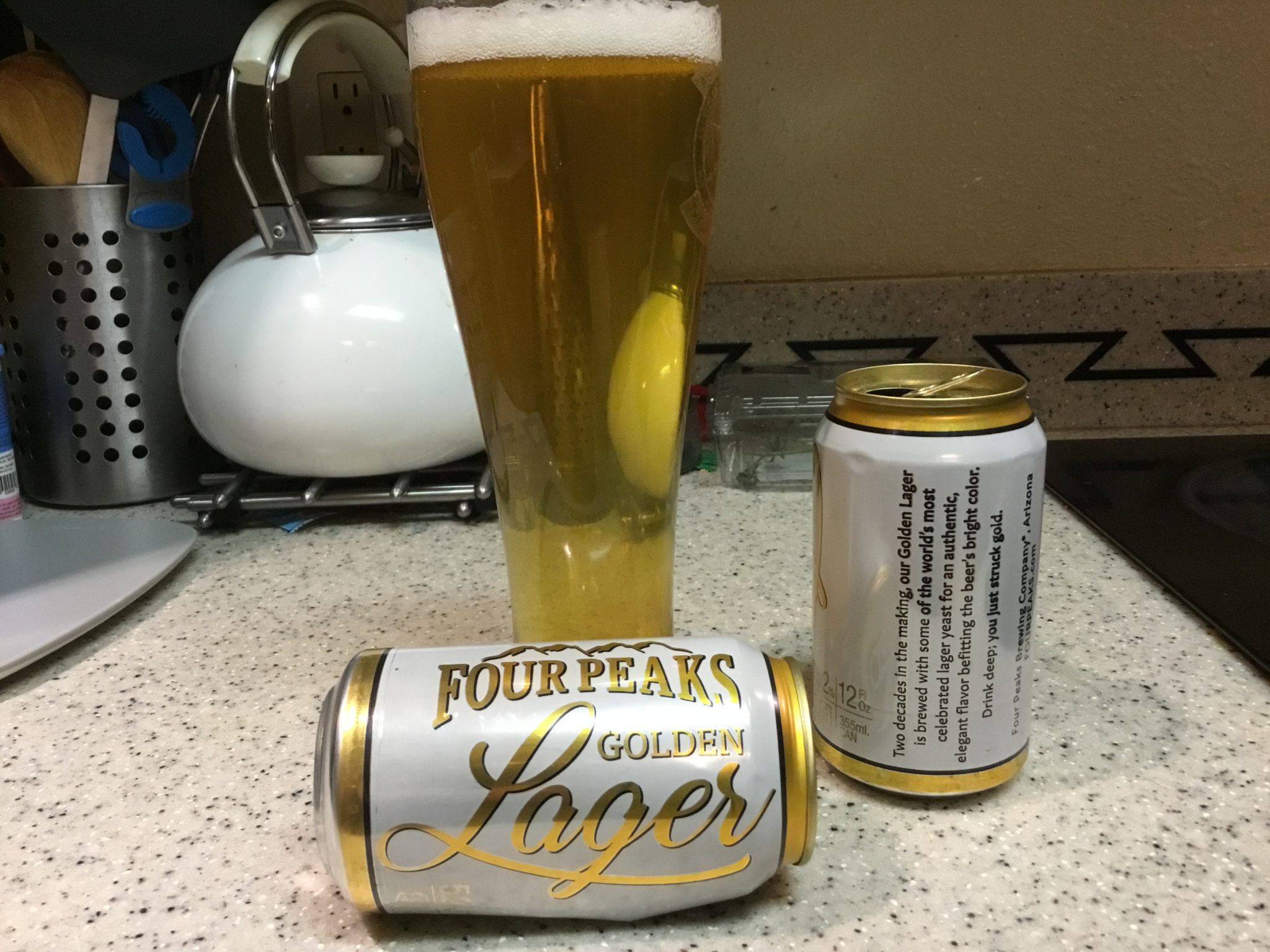 What does this ballot measure entail?  The City of Phoenix is asking residents to allocate, or not allocate funds to extend the Phoenix light rail.  The actual proposition is below:

What would Proposition 105 do?

Proposition 105 would prohibit the city from spending money on development, construction, expansion, or improvement of light rail transit, with an exception for PHX Sky Train. It would allocate any revenue from the city’s 0.7% transportation sales tax that was previously allocated toward light rail development to other city infrastructure. The initiative would earmark any revenue allocated to light rail development along Central Avenue south of Washington Street specifically for infrastructure in South Phoenix. This would include the South Central Extension project. Proposition 105’s provisions reallocating revenue would apply to any collected, unspent revenue as well as future revenue.

Proposition 105 would also add within the city charter provisions authorizing the Phoenix Citizens Transportation Committee—which is currently established through city code. The initiative would guarantee a $25,000 annual budget for the committee and task the committee with soliciting feedback from the public and advising the city council on how to spend funds reallocated by Proposition 105. 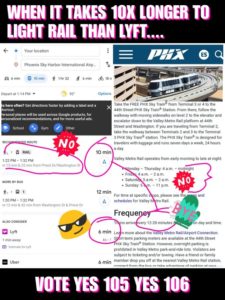 It appears to be intentionally confusing to the average voter reading at a 4th grade level since voting “Yes” means you DO NOT want the light rail projects to continue.  Now, Forbes did a piece on the Phoenix Light Rail project that puts a lot of the ridership numbers in perspective and they make the case it was not a particularly good investment.  Granted, this was nearly a decade ago.  The light rail, (Valley Metro) and the local media have claimed the light rail since it was opened has already created $11 billion in development.  A local free market think-tank however published an analysis that disputes this claim.  Of the 344 construction projects built within 1/2 mile, cited by Valley Metro, 177 were either government subsidized, government buildings, or part of expansions/renovations at Arizona State University.  17 are also located more than 1/2 mile away (honest mistake?) from a light rail station and 2 of the cited projects were built before the light rail.

One of the most absurd projects on Valley Metro’s list is a 2,000-space parking garage for air travelers. The garage happens to be next to a light-rail station, so Valley Metro includes it on the list. Yet this station is the closest light rail comes to Sky Harbor Airport, so no one using the parking garage would ever use the light rail to get between the garage and the airport. Many other projects on the list similarly have nothing to do with transit.

Why would nobody use the light rail in this case?  Sky Harbor International Airport has its own rail (Sky Harbor SkyTrain) to ferry passengers between parking structures, the terminals, and the rental car complex.  The report also goes on to say there is no reason any of the other projects could be built elsewhere.  The only effect the light rail has, is in relocating where (government subsidized) businesses owners choose to open up shop.  They were going to open regardless of the rail.

Yes, the local paper and others did make sure everybody knows this is just another Koch-funded scheme, even though the think-tank or the group initiating the ballot measure denied they received funding from them for this proposition.  The ties between the think-tank and the Koch brothers is from a disclosure of a single donation dating to 2017.  The propositions were started from a group of business owners in South Phoenix that opposed an expansion due to access to their businesses. 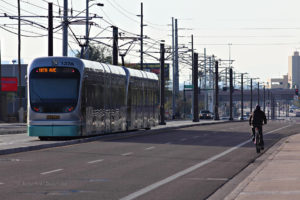 Not my photo of 43rd St and Washington.

This is a concern anybody in Phoenix can see for themselves if they ever go to a sporting event downtown.  Washington and Jefferson streets run east/west through downtown and are both one way; Chase Field, Talking Stick Arena, the convention center, and other cultural locations are located along these streets. Many of the buildings between Washington/Jefferson Street, part of an existing light rail run, are closed down primarily because they cannot be accessed by car, because you can only drive one way and access the building by crossing the light rail.  Many are also too far to walk to if you take the light rail.  The proponents of the light rail consistently argue the riders are put in a better position to make Phoenix a walking city, theoretically making Washington and Jefferson streets less congested.  Never mind the light rail effectively takes up two lanes on both streets. Finally, the high today is forecast at 109 and will likely be warmer than at noon today because of the ambient heat reflecting off both the street and the buildings.  Nobody walks anywhere in Phoenix–care to guess why?

Naturally opponents of the ballot measures are citing a positive economic and environmental impact.  Others argue the areas now pushing against the expansion were not well represented in the vote for the planned expansion due to supposed voter suppression.  Which is an odd argument for them to make because the measure passed in 2015, an off-cycle election when measures are deliberately voted on because turnout is often low.

I plan to vote yes, if you are registered to vote in Phoenix, consider voting yes if at all.

Is this another one if those drinkable craft lager/ale things that are mass produced and sold next to other yellow beers?  Not hardly. This threads the needle between a serious Czech-style Pilsner and something non-threatening for your non-beer drinker friends gathering for a sporting event.  They even put it out seasonally.  If you are in the local area, I recommend it.  Four Peaks Golden Lager 3.5/5