IFLA: The “Happy Birthday to Yusef” Edition of the horoscope for the Week of Aug 25

This week we’ll demonstrate how to read the same signs for a general population and then as it regards to a specific individual.  In this case, the Glib’s own HVAC SME.  Just a little something to thank him for all the knowledge of High Vacuum Alternating Current systems that he provides.

The skies are really quite busy this week.  The main axis is an alignment of Mars-Venus-Terra-Sol with a quaternary intersection of Mercury-Saturn (retrograde).  That main intersection is a celestial soft swap (Mars/Venus, Earth/Sun) with the modifier of news/change-beginnings means that if you’re looking to conceive, this is absolutely, positively the time to get busy with the baby-making.  Make a reminder to check the birth announcements in the paper nine months from now, there will be a bumper crop.  OTOH, if you’ve forgotten the contraception, you’d be well advised to take care of things in a non-procreative way.

That’s what it means for us in general, but what about Yufus in particular?  From to point of view of Virgo, Mars and Venus are almost perfectly eclipsed.  This is very good, since Venus is the one doing the eclipsing meaning that all the negative aspects of Mars (the fighting, slaughter, bloodshed and ruin) are going to be filtered out and the positive aspects remaining.  Plus, the two lovers getting to be literally on top of each other is naturally going to throw off some waves of happiness.  One other thing for the personalized reading is that from this perspective, the moon is in opposition, which means there is going to be a consequential lie told to you.

Now back to the rest of us.  Virgo gets the planetary bounty this week, holding the sun, and the aforementioned Venus and Mars.  Leo retains Mercury, so they still hang on to the good luck for another five or six days until it transits into Virgo.  Sagittarius keeps Jupiter, which is only fair since they had to put up with those months of retrograde motion, and Gemini hosts the moon.  This is where the general meaning differs most, since unlike the meaning for Virgo, the meaning for the other 11/12ths of the population is increase, abundance, growth, etc. 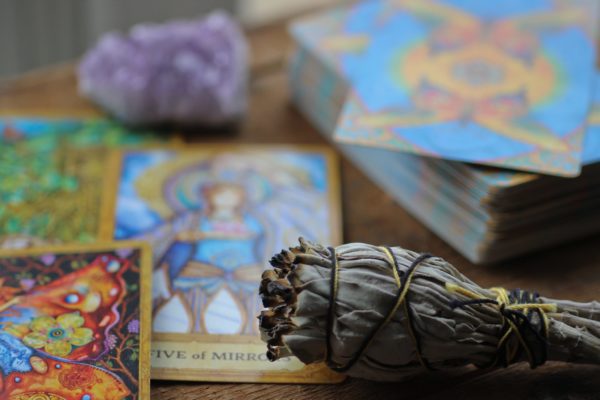 I drew the cards for Yusef, but frankly they were depressing.  Three cards saying that financial pressures were going to increase, two saying that the future involved travel, and the core card was good, but ambiguous.  The most obvious implication would be that you’re going to have another kid.  Maybe a grandkid?  Puppies?

For everyone else the cards are:

Gemini:  Queen of Cups reversed – Vice, dishonor, depravity, distinguished woman but not to be trusted

Leo:  Ace of Swords – Triumph, excess in everything