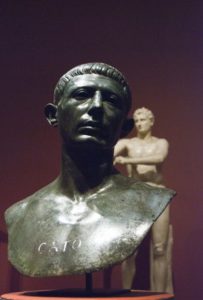 To the right you can see just another bronze bust of just another old dead white guy.  No big deal, right?  Museums the world over have millions of ‘em.

This isn’t just any old dead white guy immortalized in bronze.  This is Cato the Younger or, as his contemporaries knew him, Marcus Porcius Cato Uticensis, a Stoic, scion of the late Roman Republic, a famously incorruptible statesman, advocate for liberty (or at least what passed for it in those days) and the latest in our examples of Toxic Masculinity.

Born in 95BC in the city of Rome, Cato quickly grew into a stubborn, willful child.  The Greek-became-Roman-citizen Lucius Mestrius Plutarchus (Plutarch) chronicled several events from the young Cato’s life, including his refusal to support the Marsi in the Social War – in spite of having been dangled out a window by his ankles, said dangle having been carried out by the leader of the Marsi, one Quintus Poppaedius Silo.  This was Cato’s first public display of ballsiness and, while it is not our place to question Plutarch’s chronicling of these events, it’s important to note that Cato would have been around four years old at this time.

During the dictatorship of Lucius Cornelius Sulla, the dictator often sought out the then-fourteen-year-old Cato and his brother Caepio for conversation, despite Cato’s outspoken opposition to the dictator.  Cato’s tutor Sarpedon cautioned Cato about his opposition, noting that Sulla had taken a free hand in executing Roman nobles that opposed him; Cato replied by asking for a sword, after which Sarpedon somehow managed to curtail the boy’s public excursions.

Cato had quite a few notable relations.  Among them:  His half-sister, Servilia Major, was the long-standing mistress of Julius Caesar and the mother of Marcus Junius Brutus.  At age 21 he married a woman about whom little is known but her name, Atilia; with her he had two children, his son Marcus Porcius Cato and his daughter Porcia, who would later marry the same Marcus Junius Brutus.  This connection would have significant meaning in the civil war that was to come. 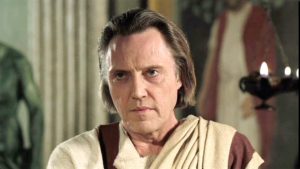 On reaching majority and receiving his inheritance, Cato left the house of the uncle where he had spent his childhood.  While his inherited wealth would have allowed him a life of luxury, Plutarch tells us that the young Cato eschewed unnecessary comforts and instead dove deep into Stoic philosophy, living modestly, eating no more than necessary, drinking only (apparently a great deal of) cheap wine, wearing plain, undyed robes and even doing without shoes.  He cultivated physical endurance, exposing himself to all conditions of heat, cold and damp to better enable himself to withstand discomfort.

Cato was 23 when the Third Punic War began in 72 BC.  (Honestly, I always thought I would have taken Spartacus’s side on that one, but still…)  He quickly volunteered to join his brother Caepio in the field.  The brothers didn’t have much impact in that war, but five years later, in 67 BC, Cato was given command of a legion in Macedon.  There he impressed his troops by sharing their food, drink and living conditions.  Cato, true to his Stoic philosophy, chose to forgo the luxuries afforded other commanders and slept among his men.  He led their marches from the front, and only left his legion when he received word of his brother, wounded and dying in Thrace.

The death of his brother hit Cato hard.  After burying his sibling, Cato embarked on an extensive walkabout of Rome’s eastern provinces and did not return to Rome until 65 BC.

On his return to Rome, Cato was elected quaestor, a position that put the Stoic in the position of being able to audit and, to some extent control, the state Treasury.  His strict rectitude and incorruptibility made him somewhat unpopular in this position, as he quickly moved to prosecute several nobles – including some of former dictator Sulla’s inner circle – for illegal appropriation of funds and for filing fraudulent documents.  Cato made himself plenty of enemies in this role, about which he appeared to not give even one single ounce of crap.

In 63 BC, Cato was elected Tribune of Plebs, in which role he assisted the sitting Consul, Marcus Tullius Cicero (a good choice for another Profile in Toxic Masculinity) in squashing the Cataline Rebellion.  Once the rebellion was put down, Cato, in a display of his usual inflexibility, wanted the conspirators executed, but a Roman general named Gaius Julius Caesar insisted instead on exiling the malefactors, spreading them among several far-flung Roman settlements for “safekeeping.”

The animosity between Cato and Caesar appears to date from this point.

Around this time Caesar, General Gnaeus Pompey Magnus and Marcus Licinius Crassus formed a triumvirate, and began slowly consolidating power between the three of them.  Cato opposed the triumvirate at every turn.  In 61 BC, Pompey returned from a campaign in Asia and demanded both a Triumph and that the Senate postpone elections to allow him to run for Consul; Cato opposed the measure, convincing the Senate to allow Pompey only one of the two options.  Pompey chose the Consul’s chair over the Triumph, but faced with the same demand from Caesar, Cato was forced to resort to a filibuster.  Unlike today’s proceedings in our own Senate, Cato actually had to hold the floor and speak, which he did so until sunset brought an end to the proceedings.

In time Caesar became Consul, and immediately proposed to award his veteran troops with rich farmlands in Campania.  As this province and its agriculture provided almost a fourth of the Republic’s tax revenue, Cato again took to the rostrum to oppose the measure – upon which Caesar had the Consul’s Lictors forcibly remove Cato from the Senate, an insult which Cato was not to forget.  Still not giving even one tiny little crap, Cato resolved to oppose Caesar’s ambitions at every turn.

But the Triumvirate was on shaky ground at this point.  Caesar’s ambitions were about to bring him into conflict with his fellow triumvirs.  It turns out that Cato’s inflexibility and zeal in prosecuting Sullan nobles had brought him in conflict with a famous general, the aforementioned Gnaeus Pompey Magnus, who had been known as The Teenage Butcher for his zeal in persecuting Sulla’s enemies.  It is ironic, then, that this very general would come to be an ally of Cato’s in the coming unpleasantness.

The solidity of Cato’s big brass pair was about to be tested. 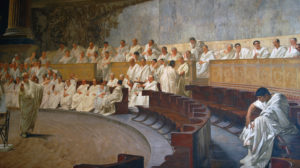 Matters came to a head in 49 BC.  Cato was then in the Senate, a key member of a group of republican Senators known as the Optimates.  In that fateful year, Caesar was winding up his campaigns in Gaul, having defeated and taken prisoner the Celtic king/warlord Vercingetorix.  Before the Senate, Cato insisted that Caesar’s term as proconsul had ended, and with it his proconsular immunity; he demanded Caesar return to Rome as an ordinary citizen, there to face charges.

Cato’s now-ally, Pompey, was willing to let Caesar accept continuation of his immunity along with giving up all but one of his legions and accepting governorship of one province, but Cato refused the compromise, and managed to ram through a resolution recalling Caesar.

The conqueror of Gaul didn’t take this well.  He crossed the Rubicon with one legion and marched on Rome.  Marcus Anneus Lucanus chronicled that moment:

Caesar crossed the flood and reached the opposite bank. From Hisparie’s Forbidden Fields he took his standards said, “Here I abandoned peace and desecrated law; fortune it is you I follow. Farewell to treaties. From now on war is our judge!”

Caesar had indeed decided to follow Fortune, and Fortune had evidently taken him as a pet, for with one legion he drove Pompey and the Optimates out of Rome and into Greece, where at Pharsalus the outnumbered Caesar seized victory from the jaws of defeat and sent Pompey and the remnants of the Optimates fleeing.  Pompey went to Egypt, where he met execution at the hand of Ptolemey’s minions seeking to curry favor with Rome.  Cato and Quintus Metellus Scipio fled to Utica in north Africa, determined to fight to the end for the Republic. 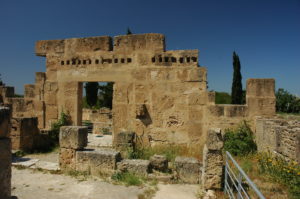 Utica, or what’s left of it.

The final battle was fought at Thapsus, where Caesar was again victorious, and against the normal custom, Caesar ordered the execution of all of Scipio’s men.  Cato was not present at the battle, having remained within Utica.  At this point even the adamant Stoic had to concede defeat.

Refusing a pardon from Caesar, Cato took up a sword and plunged it into his stomach.  Plutarch wrote:

Cato did not immediately die of the wound; but struggling, fell off the bed, and throwing down a little mathematical table that stood by, made such a noise that the servants, hearing it, cried out. And immediately his son and all his friends came into the chamber, where, seeing him lie weltering in his own blood, great part of his bowels out of his body, but himself still alive and able to look at them, they all stood in horror. The physician went to him, and would have put in his bowels, which were not pierced, and sewed up the wound; but Cato, recovering himself, and understanding the intention, thrust away the physician, plucked out his own bowels, and tearing open the wound, immediately expired. 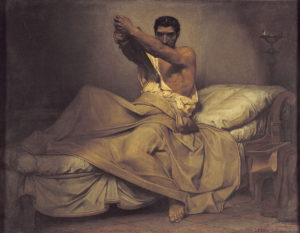 Thus, perished the man who has been described as “The Last Citizen of Rome.”  He opposed Caesar with all of his breath, standing for the founding principles of the Republic.  Personally, he was reputed to be a prickly, difficult man, and very likely a high-functioning alcoholic (hardly a novelty in those times.)  But he was a man of principle and, unlike most pols today, was willing to stick to his principles even unto death.

Caesar, now, his story has been told, by Plutarch, Lucanus, Livy, Shakespeare and many more.  He won his war, was assassinated by a man who had been one of his closest friends, but his adopted son Octavian seized control and became, effectively, Rome’s first Emperor.

You could very well argue that when Cato died, the Republic died with him.

And where is our Cato today?

Least surprising news ever: At the New York Times, Bedbugs Dear Colleagues, During an extermination sweep of the newsroom over…

Liverpool pounded the shit out of Arsenal.I mean they just humiliated them. Man City also won handily, but as far…