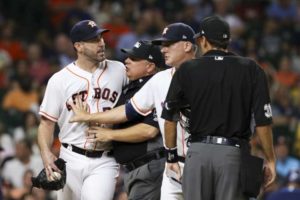 If you’re gonna be a big-league umpire, you need to not be a thin-skinned little bitch.  At least that’s my assessment of what happened last night in Houston.  No big deal, at the Firstros boat-raced Tampa anyway.But damn, a guy complaining 50 feet away with his back to you is hardly grounds to run him to the clubhouse. Other winners yesterday were: Baltimore,Pittsburgh, Toronto, Chicago (NL), Cleveland, Cincinnati, Minnesooooooda, St Louis, Oakland, Boston, Arizona, California/Anaheim/Los Angeles (AL), Los Angeles (NL), and New York (AL). And we watch to see who will falter and surge in the last month of the season, with the only interesting races the two central divisions and wild card races.

There were a handful of upsets at the US Open yesterday in both the mens and women’s draws.  More to come as the week progresses and we get into the third round or so. Until then, there’s just too many matches going on at the same time to really pay attention.  Sorry, my attention span just isn’t capable of sifting through this many matches.  Maybe I’ll do better today as many of the big names are back on the court. But don’t count on it. 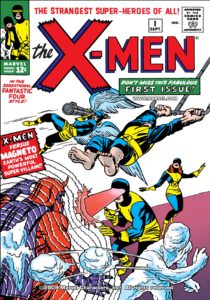 Let’s get on the birthdays, shall we?  If you were born on the 28th of August, you share it with the following people who made a name for themselves one way or another: philosopher Johann Wolfgang von Goethe, father of cinematography Louis Le Prince, cartoonist legend Jack Kirby, baseball player and manager Lou Piniella, rocker Hugh Cornwell, actor Luis Guzman, Chinese activist Ai Weiwei, singer Shania Twain, 90210 actor Jason Priestley, hockey star Pierre Turgeon, big sister Sheryl Sandberg, and Danish (and by extension Greenland’s for the time being) Prince Nikolai.

Well there you go.  Now on with…the links!

That escalated quickly. Well, not quickly, but it is certainly an escalation.  Such a shame many Brits hate democracy when it doesn’t go their way.

Ilhan Omar to be stoned to death for committing adultery.  Just kidding. She’s not still in her county of origin. But her political future may be facing that metaphorical prospect if the releases of campaign expenditures are accurate. whew, that’s a lot of travel she was funding. And a lot of very convenient round numbers.

Founder of substance abuse center appears to have been abusing some substances of his own. Alt headline: Christ, what a Masshole.

Jussie Smollett doubles-down in defense of his claims he was assaulted in Chicago.  I don’t know who’s representing him, but apparently he’s unaware of how broke Chicago is. Not to mention how full of shit his story has proved to be. 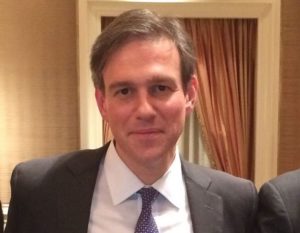 Bret Stephens is a big, fat pussy. And a bully. Fortunately, his bullying backfired spectacularly.

Deutsche Bank apparently has tax returns of Trump and family members. It will be interesting to see whether or not the court forces them to be handed over and whether it will withstand an appeal, seeing as a court cannot compel someone to hand over evidence without articulating a specific crime it is evidence of.

Something good is happening in Illinois. No seriously, that’s not snark.  Seriously.  I mean it. I know it sounds like an Onion headline, but its true, dammit!

Thank God this happened after the G-7 meetings. Oh wait, its normal and happens all the time. Carry on then.

Two songs again today. Just couldn’t resist. So here’s the first one. And the second, which probably would work better on Brexit Day, but that’s not how birthdays work.

Go have a great day, friends!