Back when I was a wee-lad in college, answering the call for a fun-filled life in journalism, I did an internship at a local newspaper.  “Sweet!” wee-JW said to himself.  It turned out that the paper didn’t have too much oversight from the owner, and the 20-something dude they hired as the editor-in-chief wanted it to be a tabloid-style scandal rag, to separate it from the crush of the other local newspapers (I’m not sure if there actually were any.)

Baby Doc Duvalier had recently been deposed as the head criminal in charge of Haiti, so I was assigned to find Haitians who had been tortured by his goon squads.  How hard can that be, you ask.  The rub was that they had to live in Montgomery County, MD, since it was a paper that focused on the county and only on the county.  So, after a not-insignificant amount of hard-bitten legwork and old fashioned gumption, I found my guy.  (Part of this gumption was asking my former French professor (3 whole weeks in the class!) to call the residence of a former Haitian ambassador in Miami for me.   I didn’t speak more than 4 words of French and the woman answering the phone didn’t speak any English and kept hanging up on me.  He graciously made the call for me, but came back with bupkis from the ambassador.)

Was my guy grimly tortured by Baby Doc’s meat handlers?  No.  Someone in his family?  No.  His dog?  No.  He was a low-level flunky in a failed coup attempt on Papa Doc.  In 1971.  But he lived in Monkey County and was assigned a .45 revolver during the not-coup.

RUN THAT BABY!!!!  I got the front page and 75 bucks for the story.  And so endeth my illustrious career in journalism (which in hindsight, was a good fucking call).

In the spirit of my misspent yout’, I’ve revived the format of news of my stupid, stupid county for the links (it ain’t Florida, but we do what we can).  Enjoy!

Local man beats the rush to the next sure-fire strategy to beat the underwear gnomes at their own game.  State gubmint only too happy to help.

Who doesn’t like a little country dick heading into the weekend? 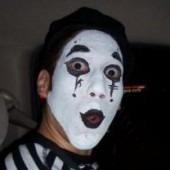