Learn Japanese Through Anime Titles – ご注文はうさぎですか？- Is the Order a Rabbit?

Once again let’s summarize the premise:

Cocoa Hoto enters the cafe Rabbit House, assuming there are rabbits to be cuddled. What Cocoa actually finds is her high school boarding house, staffed by the owner’s daughter, Chino Kafū, a small, precocious, and somewhat shy girl with an angora rabbit on her head. She quickly befriends Chino with the full intention of becoming like her older sister, much to Chino’s annoyance. From there she will experience her new life and befriend many others, including the military-influenced, yet feminine Rize Tedeza, the playful Chiya Ujimatsu who goes at her own pace, and the impoverished Syaro Kirima who commands an air of nobility and admiration despite her background. Slowly, through slices of life, often comedic, Cocoa becomes irreplaceable in her new friends’ lives, with Chino at the forefront.

This anime isn’t as awful as the summary makes it appear.  It’s a standard slice of life comedy with around six or so characters who simply make small talk and do funny and cute things.  It is by no means high art, but a fun way to spend 20 minutes an episode if you like anime.  Nothing to recommend for a non-anime person to watch, however.

English Title: Is the Order a Rabbit?

ご – go – this is an honorific. This is essentially untranslatable in English, but if you have to get point across you can use “honorable”.  The reason it’s used here is that when you are asked for your food order at a restaurant, even in the most casual of places, the staff will almost always use “go” in front of the word for your order which is…

うさぎ – usagi – rabbit.  Normally animal names are written in katakana – ウサギ – and I’m not sure why the hiragana is used here.   The word rabbit is quite common so that may be part of the reason.  Female names are also frequently written in hiragana as as it it tends to be viewed as “cuter” so that could also be part of the reasoning here.  The story is about a cafe full of cute girls.

です – copula. More below on this.  In this particular case it is translated as “is”.

か？- ka – another grammar particle that changes a declarative statement into a question. Technically the question mark, borrowed from the west, is unnecessary, but frequently used.

A literal translation would be “as for your (honorable) order, it’s a rabbit?”  The actual English title is very close to the Japanese.

When I first started learning Japanese I had little interest in linguistics.  However, I’ve always had an interest in English grammar.  So I had no idea in English the verb “to be” served dual purposes. It can be used as a copula and for the purpose of existence.

In linguistics, a copula (plural: copulas or copulae; abbreviated cop) is a word that links the subject of a sentence to a subject complement, such as the word is in the sentence “The sky is blue.” The word copula derives from the Latin noun for a “link” or “tie” that connects two different things. – Wikipedia

In Japanese the somewhat well known “desu” or です is used as a copula.  Note that “desu” is polite.  There is a plain form that is also very commonly used “da” or だ.  A big thing note here – the plain form copula also varies depending on dialect and region. 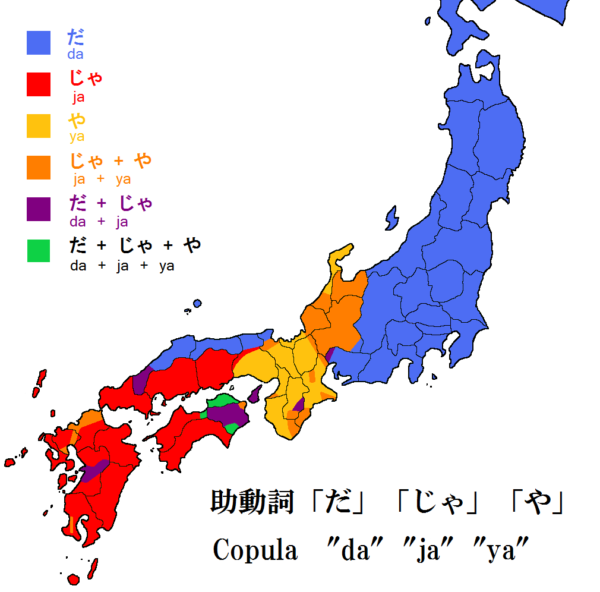 To provide an example let’s look at the following:

“As for this room it is the/a kitchen.”  More naturally – “This room is the kitchen”.

Japanese doesn’t have articles (“a” or “the”) like English.  My Japanese friends learning English find figuring out which article to use in English maddening.

However, unlike English, Japanese has two other words that are used for existence – “aru” or  ある and  “iru” or いる.  In the polite form they are “arimasu” or  あります and “imasu” or います.   Why are there two forms?  Because it’s Japanese and things need to be difficult.  Animate objects take “iru” and inanimate objects use “aru”.

“There is a cat in the kitchen.” OR “The cat is in the kitchen.”  Without context we don’t know if we are talking about our family pet or if the neighbor’s cat climbed through the window. Welcome to the obscurity of Japanese.   A cat is animate so we use “imasu”.  Note that the particles we are using here are different compared to the sentence with “desu”.  We are using the particles “ni” and “ga” and not “wa”.

There you have it.  In English the verb “to be” accomplishes what takes three different words in Japanese – desu, arimasu and imasu.  In their plain forms these are iru, aru and da in standard Japanese.

Actually, thinking about it further, if we use very polite forms of Japanese we need some additional forms for existence and the copula.  I’ll save that maddening topic that is polite Japanese for our more fluent in Japanese Glibs…