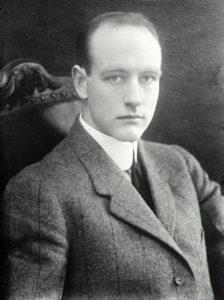 The fellow to the right looks like a banker, stockbroker, maybe a corporate executive of some type, doesn’t he?  A solid, stable, reliable, boring guy, one you’d never find pulling off anything dangerous or exciting.

What he was, in fact, was something completely different.  This character is Roy Chapman Andrews, one of the most groundbreaking scientists of the early 20th century, a pioneer in dinosaur paleontology, possibly one of the inspirations for the character of Indiana Jones, and a considerable badass in several different ways.

Roy Chapman Andrews was born to Charles and Cora Chapman Andrews in 1884 in an unassuming house on an unassuming street in the unassuming town of Beloit, Wisconsin.  He spent a good part of his youth wandering the hills and fields around Beloit, becoming a crack shot, a careful amateur naturalist and a taxidermist.  It was his skill at that latter avocation that leveraged him into Beloit College and in part paid for that education.

He graduated that institution in the year of 1906, with a degree in English and classes in archaeology and evolution added to the mix.  He was determined to move into the larger world.  And so, on leaving Beloit College, the young Andrews made his way to New York City, where he determined that he would enter employment at The American Museum of Natural History.  To that end he arranged to speak to the Museum’s Director, one Dr. Bumpus, who in the course of the interview dashed the young Andrews’ hopes – almost, as Andrews himself describes in his autobiography Under A Lucky Star – A Lifetime of Adventure:

At last he said, regretfully, that there wasn’t a position of any kind open in the Museum. My heart dropped into my shoes. Finally I blurted out, “I’m not asking for a position. I just want to work here. You have to have someone to clean the floors. Couldn’t I do that?” “But,” he said, “a man with a college education doesn’t want to clean floors!” “No,” I said, “not just any floors. But the Museum floors are different. I’ll clean them and love it, if you’ll let me.” [i]

He did indeed end up starting his career mopping floors.  But young Andrews was destined for greater things, as his subsequent career proved beyond anyone’s capacity to doubt. 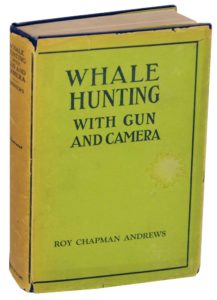 For a man who is best remembered today for his adventures in various deserts pursuing dinosaur bones, it is surprising to some that Andrews first earned his adventuring stripes chasing snakes, lizards and whales.

Scarcely had he entered his employment at the American Museum of Natural History than the young Andrews found himself packed off aboard the USS Albatross to the East Indies, where he collected various reptile specimens and watched marine mammals at play.  This led to an interest in whales, and soon Andrews was in British Columbia at a whaling station, where he went to sea on the schooner Adventuress to try to obtain a bowhead whale skeleton for the Museum.  In this Andrews was uncharacteristically unsuccessful, but he did obtain some sterling film footage of seals, the best that had ever been available to the American public at that point.

But careering around the ocean in whaling vessels quickly grew boring for Andrews; something more exotic was in order.  In 1914 he had married Yvette Borup, and in 1916, with his new wife along for the adventure, Andrews led an expedition across China’s southern and western provinces, cataloging the flora and fauna of that area.

It was in 1920, however, that the plans Andrews’ most well-known adventures began to take shape.

Bear in mind that the automobile was still kind of a brand-new thing in the early 1920s.  But Andrews wasn’t afraid of breaking new ground in more than just looking for fossils, so her determined to take a fleet of Dodge automobiles west out of Peking and into the Mongolian deserts, there to seek fossils.  The automobiles and personnel were assembled, and in 1921 the group set out.

Mongolia in those days wasn’t the most stable of places; armed bandits were everywhere, and so were corrupt provincial police, little better than bandits themselves.  But the fossil pickings were rich.  Andrews’ expedition uncovered fossils of indricotheres, a giant hornless rhino four times as heavy as an elephant, and the rhino-sized hoofed carnivore that was named after him, Andrewsarchus.

Human fossils were also a goal, as Andrews adhered to the then-popular “Out of Asia” theory of human origins, which posited that mankind’s ancient ancestors arose in Asia, but while fossils of the creature now known as Homo erectus were found in China in 1923 (then described as Pithecanthropus or “Peking Man”) Andrews’ group was not destined to find any early human remains.  In fact, in 1924, anthropologist Raymond Dart found the first fossil of an australopithecine in South Africa, the “Taung child” later classified as Australopithecus africanus.  It is not known whether this discover dissuaded Andrews from the “Out of Asia” theory. 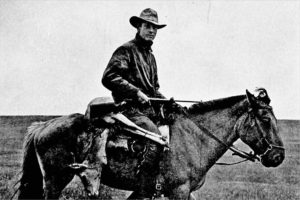 Andrews in Mongolia, on his horse Kublai Khan.

Andrews’ adventures in Mongolia were not entirely peaceable.  On one occasion he and a partner were driving down a desert valley when they were ambushed by bandits.  The bandits fired several shots at Andrews’ automobile, but as befitting a man with a big brass pair, the heroic explorer from Beloit just wasn’t having any of it.  As Andrews himself described it, he and his partner drove into a canyon, grabbed rifles and set up to ambush their ambushers:

Soon our potential murderers started to climb down the cliff, evidently bent on finishing off what they had begun. But we weren’t having any. Charlie picked one fellow silhouetted against the sky. I lined my sights on another in front. Bang, bang went our rifles. Charlie’s client sat down suddenly and rolled over. Mine did a magnificent swan dive right off the cliff. The other three ducked back among the rocks. It must have been a bit of a surprise to them. [ii]

Apparently, Andrews was a fan of Savage rifles.  From the horseback photo here, it appears Andrews favored the 99 Savage lever guns, which gives me another reason to add one to my collection.  In another photo he appears with what looks like a Model 20 Savage lying on a rock nearby.  I have not yet found a photo that clearly shows the revolver he routinely carried, although he describes it as a .38.  That covers a lot of ground, six-gun wise.

It was on July 23rd, 1923, that Andrews and his team made the discovery that he is best remembered for today.  On that fateful day, one of the party uncovered several oval objects in Cretaceous strata and went back to camp joking about having found dinosaur eggs.  Andrews returned to the site and determined that yes, these were indeed fossilized dinosaur eggs – the first ever found.  Initially thought to be from the common Cretaceous ceratopsian Protoceratops, the eggs were many years later found to belong to a species of oviraptor.  But dinosaur eggs they were, the very first; Andrews wrote about that day: 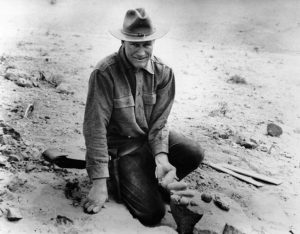 Then our indifference suddenly evaporated. It was certain they really were eggs. Three of them were exposed and evidently had broken out of the sandstone ledge beside which they lay. Other shell fragments were partially embedded in the rock and just under the shelf we could see the ends of two more eggs. [iii]

In 1927, the first rounds of the Chinese Civil War began, wherein the Kuomintang-led government was battling for control of the country against Chinese communists.  We all know now how that turned out, but at the time it was beginning to be very dicey indeed for a band of American dinosaur hunters.  After some wrangling with bureaucrats and much difficulty in getting specimens released for export – and after one incident wherein Andrews and colleagues fled down a gravel road in their automobile with machine-gun bullets cracking past their ears, escaping only after a Chinese officer directed them to drive down the ditch to escape the worst of the fire.  After this even Andrews had had enough.  He described the aftermath of their narrow escape thusly:

It was a difficult job to navigate over the plowed ground, but somehow we got to the gate of Peking and into the city. The experience affected each of us differently. I had been so busy driving that there was no time to be scared; or at least not to give in to the feeling. I had got the other fellows into the jam and had to get them out. But once back in Peking I felt awfully weak and sick. One of the other men who was staying with me had been perfectly cool throughout the entire performance and afterward. At two o’clock the next morning he went into violent hysterics. I had a beautiful time getting him back to normal.  [iv] 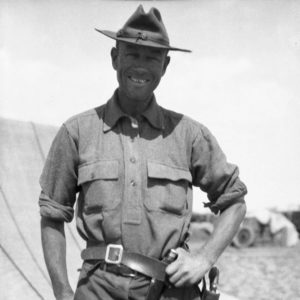 Andrews, with his habitual holstered revolver.

Andrews returned to the United States in 1930.  In 1934, he ascended to the Director’s chair in the Museum of Natural History, where he had begun his employment mopping floors.  He had chronicled many of his adventures prior to this, but on his retirement to California (which was not nearly as nutty a place then as it is today) in 1942, he began writing in earnest, churning out memoirs and tales of adventure which were all the more gripping because he really lived them.  His published works include:

If time allows you to read only one, make it his Under A Lucky Star.

Roy Chapman Andrews passed away on March 11, 1960 and was buried in his hometown of Beloit, Wisconsin.  He left behind him a legacy of adventure that few could match.  Today’s batch of scientists seem poor stuff by comparison to the gun-toting, hellraising, fearless Roy Chapman Andrews.