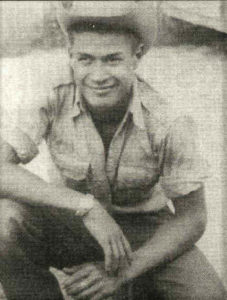 The young fellow to the right looks like nothing more than a young man from some time ago, a rash, devil-may-care young guy of a sort we’ve all encountered.  Probably a good kid to share a cold beer with; a young guy with little more on his mind than finding a job, buying a car, maybe finding a girl.

What this young fellow became, though, is much more than that.  This is one of the few photos from the youth of Roy Benavidez, a great hero, a Medal of Honor awardee, and one of the Vietnam War’s most outstanding soldiers.  Say what you will about the Vietnam conflict, but any such scrap yields both villains and heroes; Roy Benavidez is absolutely one of the latter.

Raul Perez “Roy” Benavidez was born on August 5th, 1935, near Cuero, Texas.  He was the son of Salvador Benavidez, a farmer, and Teresa Perez, a Yaqui Indian.  Young Roy’s life was not an easy one, as his father Salvador died when young Ro was only two; his mother remarried but also died five years later.  Benavidez lost both of his parents to a disease not often seen today:  Tuberculosis.  On the death of his mother, Benavidez and his younger brother moved to El Campo, Texas, to live with his grandfather and an aunt and uncle.

The young Benavidez wasn’t one to shy away from work.  He did shy away from schooling, dropping out at age 15, but he was a worker; he shined shoes at the EL Campo bus station, worked on farms on the West Coast, and eventually returned to El Campo to work in a tire shop.  In 1952, he joined the Texas National Guard; in 1955, he joined the active Army as a medic.  It was this change that finally have the young man a career – and considerably more than that.

Not one to shy away from a challenge, the new soldier from El Campo volunteered for Airborne training and, on completing that, was assigned to the 82nd Airborne at Ft. Bragg, North Carolina.

In 1965, Sergeant Benavidez was sent to South Vietnam.  There he was assigned, as many Special Forces types were in those days, as an adviser to the Army of the Republic of Vietnam – working with, as U.S. Forces called them, “Marvin the ARVN.”  His luck was not good; one day on a patrol, SGT Benavidez stepped on a mine.

His injuries were severe.  Benavidez was evacuated to the Army’s Brooke Army Medical Center at Ft. Sam Houston, Texas, where doctors assured him he would never walk again, and began processing his discharge papers.  Sergeant Benavidez decided “f**k that” and decided, in typically tough Special Forces fashion, that he would not only walk again but would resume his Army career; through sheer force of will, he did so.

Against doctor’s orders, the determined NCO would crawl out of bed after lights out each night.  Dragging himself with his elbows and chin to a wall, he would leverage himself upright, a little further each night, pushing through pain that he admitted left him in tears but was preferable to not walking.  He eventually stood, then walked.  In July 1966, he walked out of the hospital and, despite continual pain from his barely healed wounds, volunteered to return to Vietnam.  Pain from old wounds notwithstanding, Sergeant Benavidez took his career to the next level and volunteered for Special Forces training, which he completed successfully; on his assignment to the 5th Special Operations Group, he sought and was granted assignment to the elite Studies and Observations Group.  In January 1968, his long sought-after orders came through, and he was back in-country.

Roy Benavidez has already shown himself to have great big balls of solid titanium.  But his biggest test was yet to come.  On May 2, 1968, six hours of action would present (then) Staff Sergeant Benavidez with the necessity of putting his training and courage to the test. 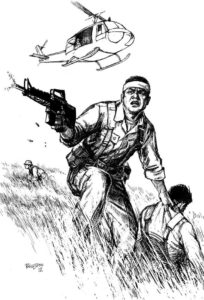 On the day in question, a patrol of twelve soldiers, consisting of three U.S. Special Forces advisors and nine Montagnard tribesmen, stumbled into an entire battalion of North Vietnamese infantry, numbering around a thousand men.

The patrol called for help.  The first attempt at rescue was not successful; several helicopters returned from the first effort with wounded crewmembers and severe damage.  Another effort was quickly assembled.  Among those at the Forward Operating Base at Loc Ninh who hurried to react was Staff Sergeant Roy Benavidez, who scrambled onto a helicopter with his medic’s aid bag and a combat knife – no other weapon, not even so much as a pistol.  He did have his dedication and his adamantine courage, which would prove to be enough.

On arrival in the middle of a firefight, SSG Benavidez soon realized that all of the Special Forces team members were either KIA or too badly wounded to move to the extraction point.  Benavidez directed the pilot of the helicopter he was in to drop him in a small clearing; he then ran 75 meters under heavy fire to the besieged team’s positions.

During the 75-meter run, Benavidez was hit three times, in the face, the head and in the right leg.  But that wasn’t about to stop him.  He took charge of the team, directing those still capable of firing to cover the landing of the dustoff helicopter.  He threw smoke grenades to cover the withdrawal and, under intense fire, dragged half of the team members to the helicopter.  When it proved impossible to move the remaining team members, Benavidez picked up a rifle and, shouting to the helicopter’s crew to move to the remaining team members, ran alongside the bird and directed suppressive fire at the North Vietnamese troops.

Finally, the entire team was loaded aboard the slicks.  Benavidez wasn’t done; he completed one last sweep of the area, retrieving classified papers from the dead team leader’s body even as the enemy fire intensified.  At one point a North Vietnamese soldier rushed him, striking Benavidez with his bayonet; Benavidez killed the NV with his combat knife and continued the mission.

Finally, suffering from thirty-seven wounds and severe blood loss, Staff Sergeant Benavidez allowed himself to be dragged into the last helicopter, finally allowing the extraction team to un-ass the area, still under heavy fire.  Sergeant Benavidez’s wounds included seven “major” gunshot wounds, twenty-eight fragment wounds, and slashes to both arms from the bayonet attack.  The fragment wounds were in his head, scalp, shoulder, buttocks, feel and legs; his right lung was collapsed, he had been struck in the back of the head with a rifle butt and a 7.62 round had hit him in the back and exited just under his heart.  His actions on that day were credited with saving the lives of eight members of the twelve-man Special Forces team.

Back at Loc Ninh, a doctor, believing Benavidez dead, ordered him placed in a pile of body-bagged corpses, until Benavidez mustered the strength to spit in the doctor’s face.  Since dead men don’t spit, Sergeant Benavidez was once again evacuated to the States, where he spent a year recovering from his wounds. 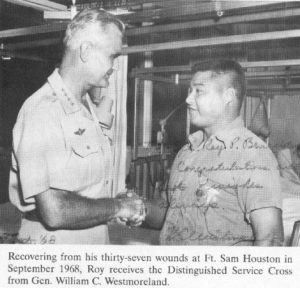 During his recovery, General William Westmoreland visited Sergeant Benavidez, presenting him with the Distinguished Service Cross.  The commander of the 5th, Special Forces, LTC Ralph Drake, had put Benavidez in for the Medal of Honor, but one of the requirements for that award is an eyewitness; all the eyewitnesses for many of Sergeant Benavidez’s heroism were dead.

Years later, however, an eyewitness surfaced.  One Brian O’Connor, who had been a radioman on the Special Forces team, had been evacuated to the States and since moved to Fiji.  Benavidez had thought O’Connor killed in action, but after reading an account of Benavidez, O’Connor wrote a ten-page account of the events of May 2nd, 1968.

Finally, on February 24th, 1981, Master Sergeant Roy Benavidez was awarded the Congressional Medal of Honor, placed on him by President Ronald Reagan, who commented that “…if the story of his heroism was a move script, you would not believe it.”  You can read the full citation here.

Roy Benavidez retired from the Army in 1976 and returned home to El Campo.  He spent his retirement wisely, traveling the country speaking to young people about the importance of staying in school and completing their education.  He was in wide demand as a speaker, but favored military audiences, where the example of his Medal of Honor was particularly inspiring; meeting an NCO whom generals salute first isn’t something that happens every day. 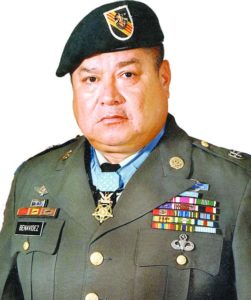 Master Sergeant Benavidez, as I remember him.

Side note:  This profile has some additional meaning to me, as I had the distinct honor of shaking Roy Benavidez’s hand once.  When I was attending Advance Individual Training at the old 91A school at Ft. Sam Houston, Texas, Master Sergeant (Retired) Benavidez had come to the post to speak to some of the classes.  He later toured the training area where my company was doing some hands-on training.  He spoke to every soldier and shook a lot of hands.  We had heard he would be on post, who he was and what he had done, so we were pretty excited; I remember shaking his hand, he looked at me very seriously and said, “Keep it up, we need medics.”

It was a considerable thrill and a hell of an honor.  Men like MSG Benavidez don’t come around every day.

Master Sergeant (Retired) Raul Perez Benavidez died on November 29, 1998, at Brooke Army Medical Center in San Antonio, and was buried with (well-deserved) full military honors at the Ft. Sam Houston National Cemetery.  I had just left my third stint on active duty in the Army not quite two years earlier and was saddened to learn of MSG Benavidez’s passing at the untimely age of 63.  The Army, like any other large institution, has many examples that young people can learn from, both good and bad; Roy Benavidez was certainly a good one.

So I realized, after I spent all day telling other people what I wanted them to do, that even though…

[caption id="attachment_46769" align="aligncenter" width="600"] OK, maybe not that urgent.[/caption]   Sloopy had something come up this morning, so you get…