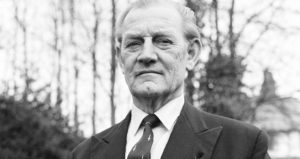 The fellow to the right is a respectable-looking chap, isn’t he?  Maybe a bit stern, but all in all, a good steady sort; the kind you’d find running a major business enterprise or maybe a bank; a solid, reliable type, not the kind of man who would attempt anything wild or risky.

That assessment couldn’t be more off base.  Who that gentleman is, is no less than John Malcolm Thorpe Fleming “Mad Jack” Churchill, a man who went into battle with a sword, a revolver, a longbow and bagpipes.  He was one of the ballsiest men to ever draw breath, and thus richly deserving of this week’s Profile in Toxic Masculinity.

Jack Churchill was born on September 16, 1906, in Colombo, British Ceylon, to Alec Fleming Churchill later of Hove, East Sussex and Elinor Elizabeth, daughter of John Alexander Bond Bell, of Kelnahard, County Cavan, Ireland, and of Dimbula, Ceylon.  There was no family connection to another famous example of toxic masculinity who shared the last name of Churchill, although the two men were contemporaries.  When young Jack was only four, the family moved to Hong Kong.  Seven years later, in the thick of the Great War, the Churchills returned to England, settling in Surrey.

Determined to pursue his education in the most masculine setting possible, Jack Churchill determined he would attend university at King William’s College on the Isle of Man.

That’s right – the Isle of Man.

Jack went on to the Royal Military College at Sandhurst and on his graduation in 1926, rode off to serve as an infantry officer in the Manchester Regiment in Burma.

Being in an infantry regiment with a long and storied history wasn’t enough to keep the young Churchill entertained.  To remedy this, he bought a motorcycle and spent his spare hours careering around Burma, on main roads, side roads, dirt tracks, or wherever else struck his fancy.  He was already a crack shot with rifle and revolver as well as the English longbow, which was to serve him well in years to come.

In between motorcycle trips and military maneuvers, he taught himself how to play bagpipes, because why not?

Leaving the Army in 1936, Jack headed for Kenya, where he worked as a newspaper editor.  Because editing a colonial newspaper wasn’t enough, the young Churchill embarked on a brief film career.  He had already parlayed his archery and bagpipe proficiency into a small part in 1924’s The Thief of Bagdad, and he expanded on that by appearing in A Yank at Oxford in 1938.

He also represented Britain in the 1939 World Archery Championships in Oslo.

But events that unfolded in 1940 were to deliver to this stalwart combination of Rob Roy, Robin Hood and a Terminator the best opportunities yet to (figuratively) show off his enormous adamantine pair of cojones. 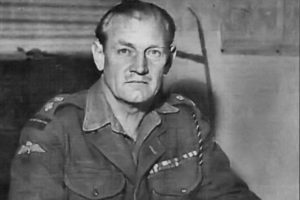 Even when he’s seated at a desk, that glare increases pucker factor by 122.5%.

When Germany invaded Poland in 1939, Churchill rejoined his regiment.  The Manchester Regiment was assigned to the British Expeditionary Force in France, which was in the process of having its ass kicked all the way to the English Channel by the German blitzkrieg.  Churchill, of course, was having none of that “retreat” nonsense and resisted at every turn.  One on occasion Churchill led a small group of Brit soldiers into ambushing a German patrol near the French town of L’Épinette.

After letting the Krauts get in good and close, Churchill gave the order to attack by brandishing his claymore, chucking a grenade and bellowing “CHARGE!”  The Brits charged, led by the possibly mad Churchill and his broadsword, and routed the German patrol.  When asked later by a higher-ranking officer why he insisted on carrying the Scottish sword, Churchill replied “In my opinion, sir, any officer who goes into action without his sword is improperly dressed.”

Incidentally it was this action that began the rumor of Churchill’s having killed a German with a longbow, hence becoming the only Allied solider in WW2 to do so, but Churchill himself denied that claim, noting that his longbow had been crushed underneath a lorry some time before this incident.

He went on going into battle properly dressed, leading his men on a series of rear-guard and guerilla actions against the Germans until the BEF was evacuated at Dunkirk.  He was wounded in the neck by a machine-gun bullet but refused evacuation and went on fighting.

At this point he decided that the ongoing unpleasantness would offer more opportunities to kill Germans if he joined a unit even more elite than the Manchester Regiment, so he volunteered for the Commandos, eventually becoming second-in-command of No. 3 Commando. 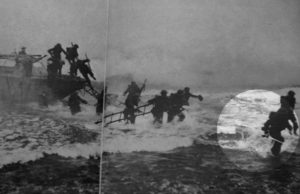 An exercise, not the real raid, but still a maniacal badass with a sword leading the way.

In 1941 No. 3 Commando, including the now Lieutenant-Colonel Churchill, took part in Operation Archery.  In this action, on December 27, 1941, in a daytime amphibious landing, the No. 3 Commando raided a German garrison at Vågsøy, Norway.  Lieutenant-Colonel Churchill was on the first landing craft.  When the ramp dropped, he was the first off, and promptly scared the living bejeezus out of the Germans by standing in the surf playing March of the Cameron Men on his bagpipes as the rest of the Commando stormed ashore.  When all were present, Churchill chucked a grenade at the German positions, apparently his favorite way to begin an attack, and drew his sword, leading the Commando into battle.  After the action was awarded the Military Cross with Bar for conspicuous gallantry, and likely also because the British Army didn’t dare fail to award a man with Churchill’s combination of courage and insanity.

1943 found Colonel Churchill in command of No. 2 Commando.  That unit landed and fought in Sicily and Salerno.  In that second action, Churchill was ordered to silence a mortar position and eliminate a German observation post that controlled a pass overlooking the Salerno beachhead.  Most officers would have assembled a patrol and moved on the positions with fire and maneuver in a traditional infantry operation, but not Jack Churchill.  He led No. 2 Commando to encircle the German observation post, then drew his sword, brandished it, bellowed “COMMANDO!” and charged the post, easily taking it and killing or capturing the German troops.  He then went on to take out the mortar post by capturing one guard, then moving on to the others in turn, shoving his Scottish sword in their faces and demanding their surrender.  He later commented:   “I maintain that, as long as you tell a German loudly and clearly what to do, if you are senior to him he will cry ‘jawohl’ (yes sir) and get on with it enthusiastically and efficiently whatever the situation.”

In 1944, his luck ran out, but his courage didn’t fail him.  Churchill was leading Commandos in Yugoslavia in support of Marshall Tito’s partisans.  In May of 1944 he was ordered to raid the German-held island of Brač.  Despite having assembled a considerable force of 1500 partisans and 44 Brit Commandos, the attack was unsuccessful.  On the second morning of the mission, Churchill led a flanking attack on the German positions while the Partisans remained behind.  By the time the Commandos reached the objective only six were left alive, of which Churchill, still toting a rifle along with his sword and bagpipes, was one.  Mortar fire swept their positions, killing all remaining members but Churchill.  Out of grenades and ammo as the Germans closed in, he stood and began playing Will Ye No Come Again on his bagpipes until a grenade knocked him unconscious.

The Germans, noting the name on this identity disk and incorrectly assuming a family connection to the British Prime Minister, sent him to Berlin.  There he was interrogated until, in frustration of having learned nothing from the stalwart officer, the Germans sent him to the Sachsenhausen concentration camp near Oranienburg, Germany.

By September 1944 Mad Jack had enough of a prisoner’s life.  Enlisting a Royal Air Force officer, Bertram James, to help in the attempt, he and James crawled under the wire around the camp and into an abandoned drainpipe.  Making their way away from the camp, they headed for the Baltic coast but were recaptured only a few miles from the sea. 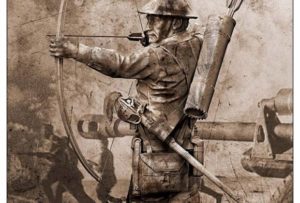 Probably because of his predilection for escaping and also probably because he intimidated the shit out his Wehrmacht guards, in April of 1945 Churchill was sent to an SS-run concentration camp near Tyrol.  After a delegation of Allied prisoners complained to a passing Wehrmacht officer, one Hauptmann (Captain) Wichard von Alvenslaben,  that they were worried about being murdered by the SS, the German captain (perhaps looking ahead to the consequences of Germany’s looming defeat) surrounded the camp and “advised” the SS to get the hell out.  They did so, and soon after the German regulars did as well.  Churchill and some others promptly decamped and walked 90 miles to Verona, Italy, where they found an American armor unit.  On rejoining Allied forces in this manner, Churchill was disappointed to find the Germans had surrendered, and so wasted no time demanding reassignment to Burma, where the Japanese were still kicking up their heels.

The assignment was granted, but by the time Churchill made his triumphant return to Burma, Hiroshima and Nagasaki had both been wiped off the map.  The Japanese Emperor, realizing that the tide of battle had irreversibly turned against Japan now that Mad Jack Churchill was in the theater of operations, surrendered.

Churchill was miffed, to say the least, complaining that “…. if it weren’t for those damn Yanks, we could have kept this war going another ten years!”

After the war Churchill continued to demonstrate badassery of a kind not much seen in British men today.  He qualified as a paratrooper and was assigned to the Seaforth Highlanders in Palestine, where he performed such feats as assisting a medical convoy under attack by Arab partisans.

In 1952 he resumed his film career, appearing alongside Robert Taylor in MGM’s production of Ivanhoe.

Churchill retired from the British Army in 1959, but he wasn’t done yet; not by a long shot.

On retirement, Churchill went home to Sussex with his wife, Rosamund Margaret Churchill nee Denny, and their children, Malcolm Leslie and Rodney Alistair.  He hung his Army awards up, and they made quite a list:

His eccentricity continued.  He went on bagpiping and longbowing his way through life. Even in retirement he maintained an office and, in the afternoons on his return home, startled train passengers by hurling his briefcase out of the train window some ways before his stop.  When someone finally worked up the nerve to ask why, he calmly explained that he was chucking the thing into his back garden so he wouldn’t have to carry it home from the station.

John Malcolm Thorpe Fleming Churchill died on March 8th, 1996, at 89 years of age, in Sussex.  The Royal Norwegian Explorers Club named him as “one of the finest explorers and adventurers of all time,” and to this day, he has yet to be outmatched in that regard.  His legacy remains today as one of the toughest, most fearless, possibly craziest soldiers Britain has ever produced; a legacy that almost certainly would have pleased him.

All right kiddos, kiddas and kiddxs. I'll be visiting exotic and tropical Scotland for almost a fortnight, so SP has…

Good morning my Glibs and Gliberinas and what a glorious morning it always is except for those in California.  …