“You’ve got to stop tweeting,” the hair said. The air in the Oval Office had gone hot and acrid. The HVAC system had been shut off over the weekend to try and flush them out.

“NEVER!” the hat replied, feverishly rocking his bill back and forth to tap on the keys.

“You’re going to hurt yourself,” the hair told him.

“At least let the phone cool down. I swear the fucking battery is starting to glow.”

“Must. Keep. Tweeting,” the hat gasped. The front of the phone drooped and he stopped typing, swaying drunkenly.

“Give me, that,” Donald said, snatching the phone away from the hat. He was stripped to the waist and sweet and sour sauce gone black with grime dotted his enormous potbelly.

“No,” the hat gasped. “There must be more original tweets than retweets!” He tipped over on to his cap and started panting. “Muh ratio!”

“That’s not what that means,” the hair said.

“Muh,” the hat started to repeat and then drifted into silence.

“You look like that cat that tried to fuck itself to death in China,” the hair said.

“No drugs,” that hair said firmly.

“Drown me in coffee then. Just drown me.”

“You want a Diet Coke?” Donald asked, not looking up from his phone. He was laboriously typing out a tweet.

“What are you tweeting, Donald?” the hair asked. 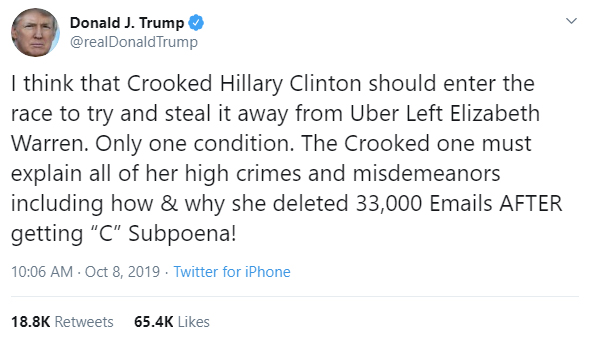 “Pour a ring of salt around the desk,” the hat said weakly. “Call for a phial of dove’s blood. She could show up any minute now.”

“Can she teleport?” the hair. “I think I read somewhere that she can teleport.”

“Her husband’s spunk is literally soaked into every surface of this room!” the hair said. “That might be enough to form a teleport link!”

“The salt,” the hat said weakly. “Call for the salt. And I’m hungry for that dove’s blood.”

“I’m not scared of her,” Donald said.

“No, seriously, watch.” Donald got up from his office chair and waddled over the Presidential Shitter.

The hat made a keening wail of fear.

Donald turned off the light and closed the door. “OK, I’m right in front of the mirror,” he said loudly.

“We have got to get the fuck out of here,” the hat said.

The hat and the hair huddled together in the silence that followed.

“Donald?’ the hair finally asked. “Donald? Are you OK?”

“What if she’s shitting out his bones in the hot tub?”

“Will you be quiet?” the hair asked.

The door to the Presidential Shitter began to shake, the knob twisting back and forth.

“She is the void that births monsters,” the hat intoned. “She is the pestilence of the sky, the earth, and the sea.”

The door made rattling booms as someone or something on the other side began beating on it.

“Guys?” Donald asked, muffled. “Guys, I think there is something wrong with the door.”

“Did you lock it?” the hair asked.

“Turn on the light, Donald,” the hat said.

“Oh, yeah,” the President of the United States said. He stepped out the Presidential Shitter and raised his arms in triumph.

[caption id="attachment_46860" align="alignright" width="236"] A nervous man at the moment.[/caption] Well the Astros are making me sweat. Thank God Cole's…