The Hat and The Hair Extended Universe: Hillary and Chelsea

Hillary’s stomach rumbled and she growled, “I hunger,” in the dark confines of the limousine.

“The Book of Gutsy Women,” Hillary said dismissively. “Why did they name it that? It makes me hungry every time I see it.”

“They paid us well enough to use our names,” Chelsea murmured.

“Your name is all you have in this life,” Hillary told her. “That’s why you have to keep it free from scandal, like I have.”

Chelsea turned to look out the window and rolled her eyes so hard there was an audible click.

“Names are the oldest power, ancient and terrible. The Demiurge named all things and in turn brought them into being. That’s scripture.”

“I don’t believe in all that, Mom,” Chelsea said. She squirmed against the leather seat of the limousine and pulled at her blouse and pants. Human clothes never fit her very well.

“Belief is nothing when you behold the Sleeping God!” Hillary snapped.

Chelsea closed her eyes and counted backward from twenty. When she opened her eyes, her mother was staring at her.

“Did it help?” Hillary asked. “Did your little anxiety exercise help? I should have never let Bill take you to that fraud.”

“He’s a psychiatrist, not a fraud,” Chelsea said in a small voice.

“A man,” Hillary spat. “Of course Bill sent you to a man. Fifty-minute gaslighting sessions!”

“Hungry,” Hillary said again. “When are we eating? I need food.”

“Is there anything in the minifridge?” Chelsea asked.

“Why didn’t you eat at the hotel?”

“Meat,” her mother croaked. She opened her mouth too wide.

Chelsea took a fistful of tiny bottles and shoved them into the gaping maw of her mother. Hillary’s eyes had gone black and the clicking bones in her breasts had begun to shift menacingly. The noise of breaking and chewed glass filled the back of the limo.

“More,” the Hillary creature demanded, streams of liquor and ichor running down her face.

Chelsea fumbled open a small shelf over the bar. “Nuts and a bunch of Luna bars,” she reported.

“Nutrition for women,” Hillary croaked. Chelsea threw them into her mother’s mouth without even unwrapping them. Mashed in a beige paste, they were quickly gulped.

“It’s so gross when you get like this,” Chelsea said.

“Born in blood and blood you shall be,” Hillary said. She used her clawed hand to peel off a long strip of leather from the seat and fed it into her mouth. 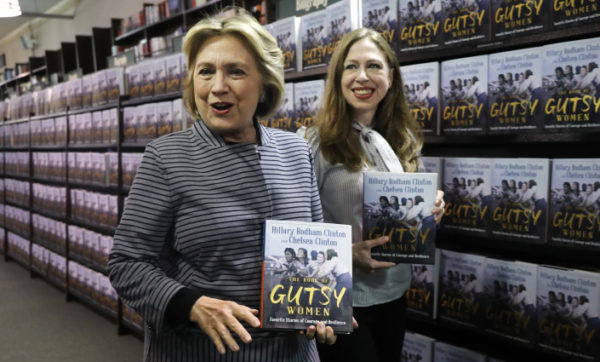