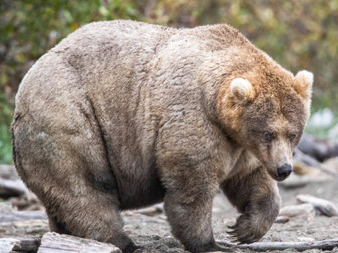 Fat Bear Week has been an annual event for the past five years in Katmai National Park and Preserve in southwestern Alaska. The idea is to publicize and celebrate the process of bears eating as much as they can to build up crucial fat reserves in advance of winter hibernation.

Park rangers made a game out of the process — a March Madness-style bracket matching bear against bear, each with photos proving girth and inviting the public to vote on the fattest bear in each pair.

But watch out, Molly, in your long slumber. STEVE SMITH likes ’em meaty.

Coming upon one of the dead bulls is an eerie scene. The forest is hot and still, apart from a raven’s repeating caw. The bull looks like a giant, deflated plush toy. It smells. Weirdly, there are no signs of buzzards, coyotes or other scavengers. His red coat is as shiny as if he were going to the fair, but he’s bloodless and his tongue and genitals have been surgically cut out.

Marshall says these young livestock were just reaching their top value as breeding bulls. The animals are worth around $6,000 each. And since these were breeding bulls, hundreds of thousands of dollars’ worth of future calves were lost too.

Finding these young Herefords in this remote country can sometimes take the ranch’s experienced cowboys days. Ranch staff members are now required to ride in pairs and are encouraged to carry arms.

“It’s rugged,” Marshall says. “I mean this is the frontier. If some person, or persons, has the ability to take down a 2,000-pound range bull, you know, it’s not inconceivable that they wouldn’t have a lot of problems dealing with a 180-pound cowboy.”

“Champ,” the sea monster of lore that lives in Lake Champlain, and other water-dwelling cryptids of New Hampshire and across New England fascinate documentarian Aleksandar Petakov.

The Nashua filmmaker and cryptozoology researcher shared his love for the elusive creatures Thursday at Derry Public Library.

Petakov said he learned about the Loch Ness Monster of Scotland as a youth. Later, while researching the various lake and coastal sea serpents in New England for a documentary mini-series titled, “On the Trail of… Champ” (available on Amazon Prime and Youtube), he discovered our Champ actually pre-dates Nessie.

Champ, he said, was first sighted by Samuel de Champlain in 1609, with more sightings documented in news articles in the 1870s, during which a sea serpent scare swept the nation. Tales of a monster in Loch Ness had begun to circulate about that same time.

Now, Petakov said, he’s skeptical of the Scottish counterpart to Champ but believes there is “something going on” at Lake Champlain.

Theories explaining what appears to witnesses as a long-necked creature with a elongated, humped back range from the mundane — objects like driftwood and common eels — to the fantastic, prehistoric sea creatures that have survived countless millennia yet remain undetected by biologists to this day.

Petakov’s favorite theory is that Champ is actually a long-necked tortoise that has grown very large and very old.

Nessie is so over-exposed. It’s nice to see American cryptids get more attention. I mean, we have quite a few of them. 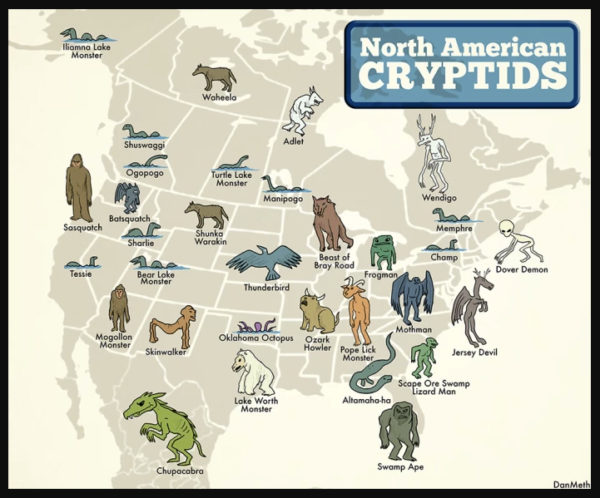 And then there are these assholes:

Police are looking into who might have taken an apparent grinder tool to a sacrificial stone tablet at America’s Stonehenge last weekend, and left behind a wooden cross with photos and drawings attached.

On Sunday, Sept. 29, the Salem Police Department responded to the tourist attraction at 105 Haverhill Road around 12:30 p.m.

“The responding officer spoke with the caller who stated he was walking the property and located a wooden cross suspended between two trees,” Deputy Chief Joel Dolan said Thursday.

The property owner said they also found damage done to a sacrificial tablet using a power tool, most likely a grinding tool. The vandal also apparently hit it with a sledgehammer, knocking the stone tablet over.