The movie Labyrinth (1986) is a tale of an adolescent girl’s quest/hero’s journey/sexual awakening. It’s a fantasy that features muppets good and slightly evil and everything in between. It also features David Bowie in very tight tights with his cod on obvious display. You can’t miss it—and that’s the point.

But why is it the point? 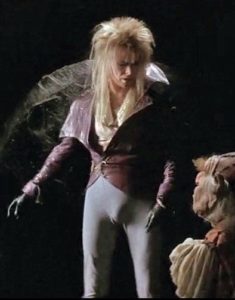 Jareth the Goblin King and his co-star. No, not the muppet.

Our intrepid heroine, Sarah, is a girl whose mother ran out on the family to become an actress and from what tidbits one can glean, a relatively successful stage actress. Sarah is not resentful. In fact, she finds this wistfully romantic. Sarah has a baby brother by her not-very-new stepmother, whose treatment of Sarah is (per Sarah’s point of view) borderline abusive because she asks Sarah to babysit while Dad and she go out on a date. The viewer doesn’t get much but that the stepmother would not ask Sarah to babysit if she had a date or parties to go to and that she is frustrated that Sarah doesn’t want friends nor does she want to date or go out. Sarah just wants to live in her own fantasy world alone, cosplaying and dreaming about her mother’s glamorous life, which distresses the stepmother to no end.

Stepmom: She treats me like the wicked stepmother in a fairy story no matter what I do.

We get the point: Sarah’s living in her head in the starring role of Cinderella and loving every second of her victimhood. But she’s a teenager whose mother ran out on her, so that is to be expected.

So Dad and Wicked Stepmother leave and there’s poor Sarah wandering around the house in a romantic and fanciful poet’s shirt and vest, in the dark while it’s storming outside, bemoaning her fate and talking to the baby rather hatefully, yet handling him gently.

Sarah: I wish the Goblin King would come take you away.

And … cue baby vanishing. An owl thumps at the window and (because she is very smart), she opens it.

Owl: a symbol of femininity, fertility, darkness, spiritual wisdom, strategy, and represents the goddess Athena/Diana. “According to myth, an owl sat on Athena’s blind side, so that she could see the whole truth.”

Then there stands a man, a tall man with freakish hair in RenFest garb. He’s the personification of desire, and Sarah is breathless with fear and attraction. He is Jareth the Goblin King, and she knows this instantly. She begs for her brother back. He plays with his balls to demonstrate his magic while giving her a challenge/quest/dare. If she can complete the labyrinth that surrounds the Goblin City in 13 hours, he’ll give her her baby brother back, but if she doesn’t, he will turn the baby into a goblin forever.

And off she goes on her quest like a good little hero/ine on his/her journey, encountering all sorts of obstacles along the way, the main one being her hubris that she can defeat the Goblin King 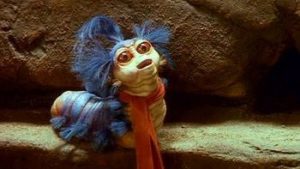 She is constantly exhorted not to take things for granted and that things aren’t always what they seem. She cuts other characters off once she thinks she has all the information she needs. She doesn’t ask the right questions. She thinks her wisdom is sufficient to solve the labyrinth.

On the surface, the movie is a morality tale and is very explicit about it: Don’t take anything for granted and stop it with the hubris. A teenage girl watching this movie will get that. She will be breathless at the idea of Jareth the Goblin King taking an interest in a lowly teenage girl, but she won’t parse that. Why do that when she has a powerful, magical man’s attention and his lust (which is in plain sight), tempting her to the pleasures of hedonism? And he blatantly uses his cod to tempt her with his presence, his devotion to her, his love and desire for her as a woman.

Jareth: I ask for so little. Just let me rule you and you can have everything you want. … Fear me, love me, do as I say, and I will be your slave.

The story is a constant struggle between Sarah’s sense of adult responsibility, her burgeoning womanhood/sexuality, and her girlish dreams, desires, and fantasies.

The struggle comes down to two pivotal moments in the movie: 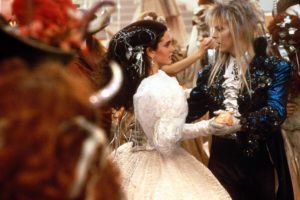 Dancin’ in the streets… Oh, wait.

Sarah has been poisoned. In her delirious state, she is at a ball, in a grown woman’s fantasy ball gown, in the middle of decadent adults, being romantically pursued by Jareth. She is confused, disoriented, even while it is the culmination of all her romantic and magical fantasies. Yet the memory of an important quest is on the edges of her mind. She chooses to rebuff Jareth’s advances and escape, turning away from her new and scary sexual feelings.

She falls in the darkness, eventually winding up on her own bed, which is frilly. Was it a dream? Was it real? Her bedroom is full of stuffed animals (that look remarkably like her muppet friends), RenFest clothing, a shelf full of elaborately bound fairy tales, a vanity on which there’s makeup and knickknacks. Every single thing in her room is a three-dimensional representation of everything going on in the fantasy. Most importantly (which you will miss in a blink), there is a newspaper clipping of a review of her mother’s play. It’s a picture of her mother standing with her costar, who happens to look exactly like Jareth the Goblin King.

The Goblin King is in the details.

She sits confused at her vanity while a character shoves all her old comforts at her and reminds her of how nice it is to be in her comfy warm and welcoming and fantastical bedroom, tempting her to stay a little girl. She’s painfully disoriented, but it’s her own room, her childhood in 108 square feet, her shelter from the world of adulthood, adult decisions, adult problems.

On the edge of her mind, though, is a purpose, a purpose she doesn’t remember until she sees one of her fairy tales and remembers. On she forges. You know she successfully retrieves her baby brother because that’s how the quest works. Humans like that.

In the last scene, she’s back in her house, the baby’s in the crib asleep, she goes to her room and starts putting away her childish things, Dad and Stepmom come home. The stuffed animals come to life and regretfully must leave, but they reassure her that should she ever need them …

They don’t finish the thought, but she dances with them while an owl (femininity, fertility, darkness) sits on a tree limb outside her window and watches them before flying away.

For now, she is firmly on the edge of girlhood and womanhood, having rejected both—for the time being—but knowing that it’s inevitable and she will leave her friends behind.

I was not aware of this movie when it was released in June of 1986. My parents had bought a house on the opposite corner of the metro area from where I grew up and I was busy moving us. I and our trusty 1.5-ton passenger van moved that house almost all by ourselves. I was also getting ready to go to BYU. I would stay in the new house for a grand 2.5 weeks before I left for another adventure.

I was leaving my frilly childhood bedroom and stuffed animals behind and in a month, I would be dropped off at a dorm 1200 miles away from home watching my parents drive away and going back to my dorm room alone. But what was home? A new bedroom in a new house in a suburban neighborhood like the one I’d always fantasized about? Naw. “Home” was no more home than the dorm room was. My home was gone forever and we all know you can’t go home again.

The movie didn’t come to the BYU on-campus theater until late spring or early fall semester 1987. I don’t remember. I went with this gorgeous, funny, hyperactive Korean dude I was majorly crushing on. He couldn’t keep his leg still, bouncing it all the way through.

But the movie worked its spell no matter how irritated and distracted I was.

Fast forward 20 years. I found the online romance novel scene. Self-proclaimed feminists and budding SWJs were out pounding the internet pavement preaching the gospel of the Feminist Agenda of Romance Novels. Why? Because they liked them, they felt guilty about liking them with some of their problematic themes, and wanted mainstream feminism to stop sneering at what they liked. It was simultaneous defiance and begging for approval.

They didn’t get it. I was a romance-novel veteran and they hated the early ones where the heroine was brave and gutsy and involved herself in all sorts of feats of derring-do. They were bad. “This isn’t your mother’s rapetastic romance novel,” they would screech, not actually knowing what they were talking about. The romance novels of yesteryear had kick-ass heroines and more explicit sex than the namby-pamby stuff of the aughts.

A major participant in Romancelandia was a women’s studies professor. Her husband was Jewish. She was Catholic, but converted to marry him. He got a job at some rinky-dink college and she was a spousal hire (“You don’t get me if you don’t hire my wife”). Instant tenure. Hot stuff in her field (ORLY).

She had heard much wistful sighing over Labyrinth in Romancelandia so she sat down with her two tween sons and watched it. Like a good feminist and women’s studies professor, she broke it down to three things: David Bowie’s cod, phallic imagery everywhere, men (Henson and Lucas) telling such a stupid tale to fulfill their own perverse desires for a young girl. She thought it was hilarious and ridiculous, a sausagefest (with one sausage).

She, whose respected romance novel blog* with thrice-weekly posts would routinely get close to a hundred comments (impressive even in those days, for a one-chick blog), garnered a few vague “Oh, that’s an interesting take” type comments.

It sat there. For a week. Getting nothing more. She let it sit for a few more days. Nothing.

Finally, I said, “I really don’t understand how you missed the entire point of the movie.” And went on to summarize the above but far more briefly and only so I wouldn’t come off as totally unhinged with rage at her stupidity.

How in the world does a feminist women’s study professor—who “loves” romance novels (but only the politically virtuous ones) (zzzzzzz) and screams to her disdainful colleagues how empowering and feminist they are—miss this?

I stopped just shy of telling her she was a stupid traditional housewife who converted to a man’s religion to marry him, followed him to his profession, got a job on his coattails, and promptly had two children. Betty Friedan would be ashamed. There was nothing “feminist” about her, and then she missed this.

She gave me a polite, “That’s an interesting take,” but the floodgates opened. And the comments section exploded with other gently made points about Labyrinth’s importance to both feminism and the hero’s journey and the fact that a girl was on the hero’s journey (quite groundbreaking for 1986) and a girl’s sexual awakening—and that Jim Henson and George Lucas knew more about it than any other filmmakers at the time (and maybe still) and portrayed it accurately. Details and symbolism got pulled out left and right.

Dr. Hot Stuff: “Well, maybe I should watch it again.”

She lost a lot of credibility in Romancelandia that day, credibility that was, inexplicably, very important to her.

My work there was done.