Can’t talk.  I’m in line at Best Buy waiting for it to open.  Its just barely cold enough to be annoying.   I am fueled entirely by this, and I don’t recommend it.

The election in Uruguay was too close to call, but the left-wing candidate conceded after a count of 35,000 ballots from voters who did not make it to their assigned voting station.

Some of the dozens of demonstrators had bandages on their faces and told angry tales of being hit by face-level fire that they felt was intentional. “In Chile, asking for dignity costs you an eye,” one sign proclaimed.

Well, dumbass.  Asking for “dignity” used to cost you a ride in a helicopter…

Brazilian Trump, now the focus of his own witch hunt. 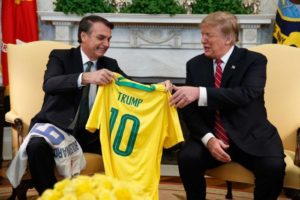 Well, this is…um…an interesting way to handle it.  On the bright side, if he does what the last guy did, they might actually have something worthwhile to impeach him.

Here’s some Sabbath for Black Friday.