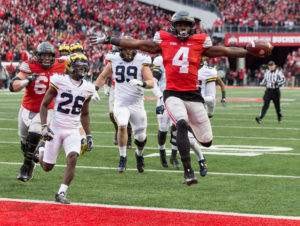 It’s the Monday before Thanksgiving, and that means my kids are home from school and I am trying to button things up this week for my last auction of the year where I get rid of the stuff I got hung with or bought thinking I could flip it.  There will be a lot of head-scratching and “what were you thinking” as I go through it.  Oh well, it’ll take my mind off The Game for a while. After otherwise manhandling Penn State, the Buckeyes look ready (if they can hold onto the damn ball).  I know who wasn’t ready: Oregon.  They shit the bed in the desert and all but put the Pac12 out of the playoff race unless Utah blows the doors off Colorado and the Ducks themselves.  Of course, nobody in the SEC of note played a decent opponent. They don’t do that during the penultimate week of the season.  And Clemson decided to take a bye week as they wrap up that murderers row of a schedule they faced with South Carolina and then likely a 4-loss foe in the ACCCG. There was a bunch of other shit that happened, especially yesterday in the NFL, but I just now realized I spent too much time on this opening paragraph and am now behind, so I’ve got to move on.

The commies got their taints kicked in in the local Hong Kong elections. Let’s see how this effects what’s going on.  Because if we all know one thing its how commies respect elections that don’t go their way.

Rebooted and ready for work!

This woman has more lives than a cat. Or she’s a skin-suited robot. Either way, good to see her back on her feet. I hope she lives another 20 years. But she really does need to retire out of respect for the office she’s incapable of filling anymore.

A popular Alabama sheriff was killed in a parking lot…by the son of a cop.

London becomes a little less free. I don’t know if I even want to visit that shithole anymore. People there are little more than drones at this point.

What a couple of assholes. Learn some science, dickheads.

That’s all I got.  Have a great Monday.