In a previous article I looked at how the polls for the Democratic nominee for President compared to the bookmakers’ odds. This is an update to see how things have changed in the last two and a half months.

A snapshot taken of the polls and odds on three dates presents a good summary of what has happened: (i) August 15, when Elizabeth Warren’s odds first passed Joe Biden’s, (ii) October 13, when Warren’s odds peaked, and (iii) November 20, the most recent data when this article was written. This time all data are taken from averages compiled by RealClearPolitics.com. 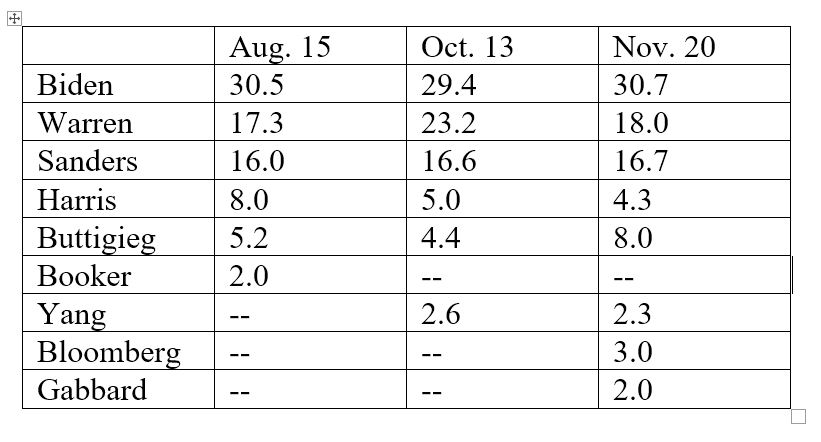 Next, the odds, in % (anyone who has never been above about 5% not shown):

We see that the poll numbers are much more stable, especially for Biden and Sanders. Warren had a small rise, mostly at the expense of Harris, only to give it back as Buttigieg gained ground and Bloomberg entered the race.

The odds are much more volatile: Warren had a huge surge, taking favor from the next four contenders. Clinton (Hillary, that is) and Yang were the only others to gain traction in October. Of course, Clinton is not in the polls data since she has not declared and therefore (I assume) the pollsters don’t include her in the choices, although I wonder if some people chose her and those votes were discarded or called Undecided.

Since her peak, Warren gave it all back as Biden and Sanders recovered and Buttigieg surged into third place. Harris’s support wilted even further to the point where the bettors seem to consider her a nonfactor. Bloomberg actually reached 8.9% right after declaring, but dropped back some since then.

It will be interesting to see how the numbers change between now and the Iowa caucuses. According to RealClearPolitics.com, the polls for Iowa now have Buttigieg in the lead (23.5%), with Warren (17.8%), Sanders (17.0%), and Biden (17.0%) in a virtual three-way tie for second. Klobuchar (5.3%), Harris (3.3%), Yang (2.8%), and Steyer (2.5) are next. Steyer has been saturating Iowa (and therefore me) with ads claiming that the U.S. government has been bought by corporations; his national numbers are about half of his Iowa numbers. I for one will be glad when the Iowa caucuses are over.

There is much more detail at RealClearPolitics.com, if you want the complete picture (they have really nice graphs over time). I leave further analysis and conspiracy theories to the Glibertariat.