Stumbling Along in Germany

(All photos mine except for one- I am not that old)

I promise this bit of scribbling will be shorter than my usual missives, but it will be more of a bummer than discussions of recreation and the early Apollo program. This article will also lack the flair of H&H or SugarFree but may intrigue some of you to learn more about a privately funded and executed memorial project.

The National Socialist era (1933-1945) for Germany was a time of both governmental and non-governmental lawlessness. Everyone in this group is aware of the broad outlines (or intricate details) of the crimes perpetrated by the National Socialist German Workers Party, the government it controlled, and the people who supported the goals of those entities. With the end of that era in May 1945 Germany entered a period of denial and silence concerning the crimes committed in the national socialist era.

Slowly, and by fits and starts, the government and people of West Germany (FRG) began to recognize the crimes committed in the name of the German State and the positive actions by those few who openly opposed the socialists. Even so, people like the July 20, 1944 conspirators were generally seen in a poor light by most of the German population for decades. In the International Socialist GDR the NSDAP past was even more hidden because “the new boss is like the old boss”. Any public remembrances had to be wrapped up in the glorification of the communists (mis)rule of the East. With the collapse of Warsaw Pact and the subsequent reunification of Germany a re-examination of how to remember the totalitarian era began to be debated and acted upon in Germany.

One problem of this reexamination was how far removed from today the NSDAP’s crimes were. The crimes are entire generations removed from the people inhabiting Europe today. Today most of the perpetrators are in their graves and the surviving few are pushing 100 years of age. Even German prosecutors state the last of the Nazi trials probably has been conducted. The statistics for the victims are ever darker. Those who survived often had compromised health and suffered early deaths. It is rare to find any alive today, even in the populations of those who moved overseas after WWII ended. Various government agencies wrestled with the issue and the common solution was to memorialize the victims and keep quiet about the criminals. In Berlin for example, the memorial and museum to the July 20th 1944 Conspirators is well done, but limited. The Holocaust Memorial near the Brandenburg Gate is expansive, but the dead are nameless. Across the street there is also a small memorial to the homosexuals killed by the NSDAP- again nameless, but full of current politicization. 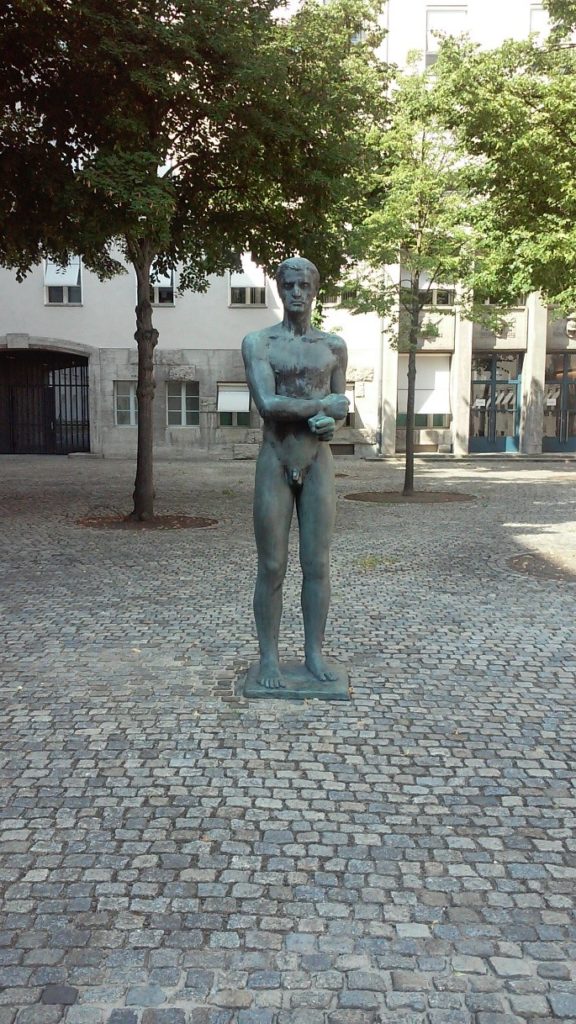 Monument to Oberst Claus Von Stauffenberg and other conspirators at the site of their July 21, 1944 execution. 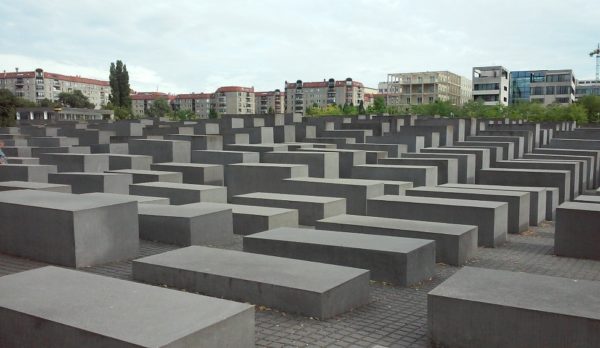 Portion of the “Memorial to the Murdered Jews of Europe“ (aka Holocaust Memorial) near the Brandenburg Gate.

Last month I was in Wiesbaden, Germany for business with a few extra days tacked on. The first night there, a group of my co-workers and I went out for dinner. We had different knowledge levels of Germany with some of us former residents and several on their first visit to Germany. After dinner we were walking back to the hotel and I noticed three small bronze squares in front of a building. I brightened since I had a chance to share with my co-workers a small aspect of German life. “Hey look! Here are three stumble stones.” We paused at the squares and I let them know that this was the last home of the “X-berg” family and it was from here the National Socialists seized them. I continued, “They were rounded up on X day and they were transported to Sobibor and arrived on Y day. They were probably all dead within the hour.” I heard a quiet groan and a, “Thanks Double for that bit of ruining our evening.”

What had I described to my co-workers? It is a project by conceived and executed by Gunter Demnig to remind people of the names and fates of those persecuted by the national socialists. In 1992 he conceived the project to memorialize as many victims as possible at their last residence as a free person. The memorial stones pull no punches. They start “Hier wohnte” “Here lived” and tersely lay out the fates of the people who lived at that address. Since 1992 he has cast and placed over 80,000 (as of 2018) of these memorials across Germany and Europe making it the world’s largest decentralized memorial. He runs the private organization with donated funding that casts and emplaces the Stolpersteine.

Anybody can nominate a victim of the national socialist’s. The victim(s) are not limited by category and can include Jews, homosexuals, Roma, “shirkers”, union members, etc. The key is that the victim must be a victim of the national socialists and not WWII in general. (e.g. Killed in a concentration camp- yes. Killed as a soldier or a civilian by combat operations- no.) Once the nomination is properly researched, documented, and validated- Gunter is German after all- a personalized monument is cast and is ideally placed in front of the last known residence of the victim. Sometimes a group monument will document the names at a known transportation site. Most German cities have supported this initiative- Munich has not- and a slowly growing number of other nations have permitted memorials placed in their locales. (Though often not without local controversy.)

Why “stumble stone” or “Stolpersteine”? There are multiple reasons. Each block is 10 cm X 10 cm (~4in X4in) and is set close to flush with the sidewalk stones/concrete. While walking they are noticed when you closely approach them, or your shoes trod on a not uniform surface. The name also comes from a NS era anti-Semitic joke about un-uniform paving stones marking a Jew’s grave. Gunter Demnig also states that because you can’t decide to avoid them (like a conventional memorial) and come across them at close range a Stolpersteine “is a deeper intrusion of memory into everyday life.”

After my business trip was over I took a few days of vacation to visit my son’s family in Berlin. In the morning I would walk the neighborhood, get some coffee, and explore while the rest of the apartment slept. (I am well trained on the prime directive- do not wake a sleeping infant.) My son’s family live in a nice but by no means remarkable neighborhood with an average history. By that I mean it was not a Jewish, International Socialist, Union heavy, or anything else neighborhood. Since the early 1900’s it has been a respectable middle class neighborhood. Almost as soon as I left the apartment building I came across my first stumble stone. It is literally next door and memorializes one of the first victims of the NS era. I wander down the street and buy my cappuccino and chocolate croissant, shortly thereafter I see another stumble stone- this time for a person seized on the street and shot by the Gestapo the day before Berlin fell to the USSR. That night I decided to walk every block immediately around my son’s residence and see how many people were killed by the NSDAP. This is a snapshot of an approximately five block by four block area of Berlin and includes only the Stolpersteine and not those killed because of air raids, military service, Soviet ground combat, or post war rape or disease.

I am not going to show you all 17 of the stumble stones I found in that small area. (I may have missed some, but I hope not.) Here are some of the representative stumble stones to give you an idea of life and death to out groups under a socialist regime. 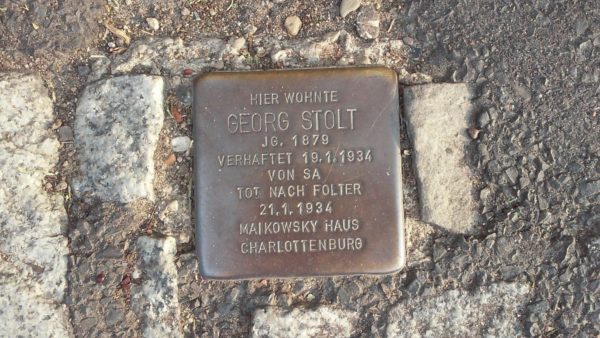 Georg Stolt was a member of the German Communist Party and served on the Berlin City Council (1920) and was a member of the Prussian Parliament until 1932. In 1934 he was seized by the SA and placed in Protective Custody, shortly thereafter he was shot by the SA in an early version of a concentration camp (KL). 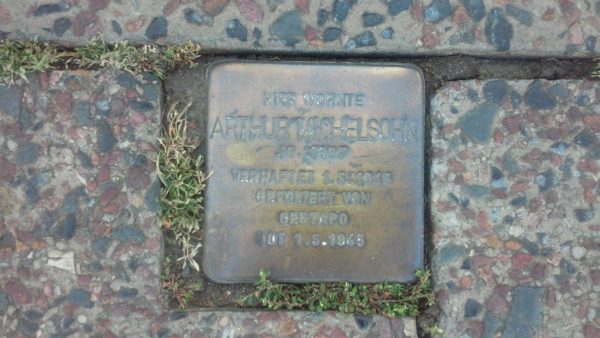 Arthur Michelsson was seized and killed the same day. Most likely by a Gestapo run “flying court martial”. Less than 24 hours later this section of Berlin was captured by the Soviet Army.

The picture below was taken on May 2, 1945 at the Reichstag about 1 km west of this spot. 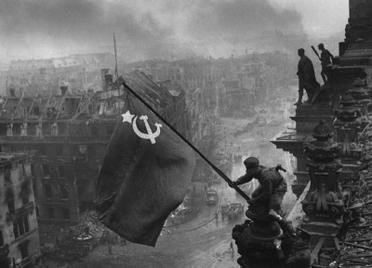 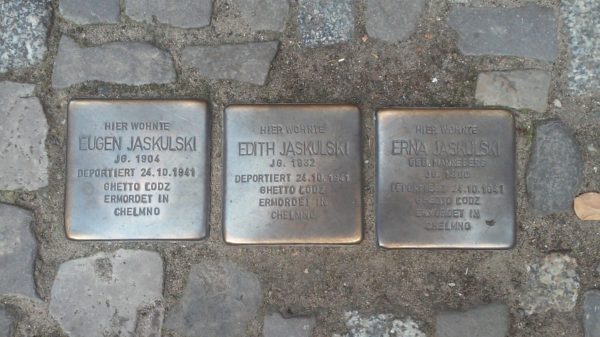 The Jaskulski family was deported to the Lodz Ghetto in occupied Poland. Edith was nine years old when she was taken from her house to Hamburger Platz and loaded into a freight car. The family was later selected for “transport to the east” and died at the Chelmno Extermination Camp. They most likely died in early 1942 during Operation Reinhardt which was initiated after the Wannsee Conference agreed upon the “final solution to the Jewish problem.” 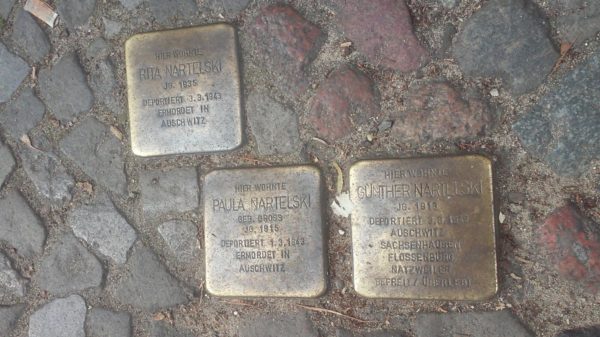 The Nartelski family was deported Auschwitz as part of Operation Reinhardt. Rita (~8 years old) and her mother Paula likely were gassed upon arrival. Gunther entered the main camp and later survived the evacuations to the west. After he was liberated, he moved to America and remarried. More about the Nartelski family here.

The stumble stones are jarring whenever you see them. You can’t help but to remember that RIGHT HERE a person or persons lives were destroyed by a socialist regime. This ordinary building in front of you saw property seized, lives destroyed and parasites receiving ill gotten gains. Because of my knowledge of history and political outlook I fully realize that the stumble stones are not just a memorial to the past but a living warning for today. These memorials are a reminder of the ultimate goals of the democratic socialists and “warmnistas” living in our societies.

If you want to find out more about the project, or if you have a relative/family friend to nominate you can visit here: http://www.stolpersteine.eu/en/home/ 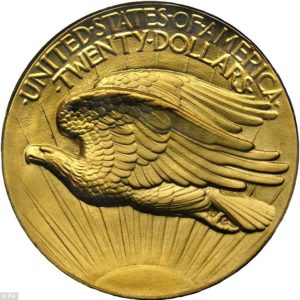 I will say nothing without my lawyer present.

Saturday night links of, oh crap I have to do the links!

Who's a Good Boy?

Everyone love dogs.  Unless they are some sort of cat-loving sociopath.  Even the President. This is my review of Founders…