Here’s the background story – it was a dark and stormy night and I was canoeing with all of my firearms as we all do from time to time. All of a sudden a rogue wave came up and capsized my canoe, and I lost ALL of my firearms to the depths of the oceans. It’s a tragic story. Completely 100% true too. I’m still really bummed about it, so I decided I would build a safe for future firearms to cheer me up.

I don’t have a traditional firearm safe, but I do have a couple of the green metal cabinets that you can lock. That’s always been good enough for me, but it means I need a closet or space big enough to house it all. For the last several years everything has been piled in a closet along with boxes and storage bins from the last move. I decided I was going to build a storage cabinet that I can lock everything inside, that doesn’t say “guns in here” to my guests. I can simply say “we keep some valuables in here, along with some important documents.” Plus I have a lot of wood laying around and I need to do something with it.

My plan was to have it big enough to house both the big and small green metal cabinets, with a shelf area between the two. So I made a dado jig to cut dadoes in ¾ inch plywood for the sides and the back that would all be the same width and more importantly in the same spot. 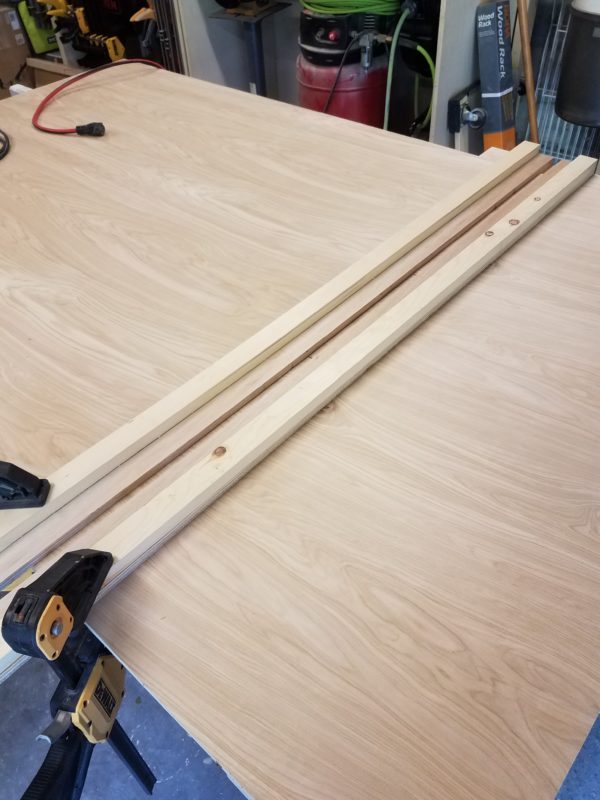 For the sides, I cut the dadoes with a router  then ripped the sheet of plywood in half to get the two sides. 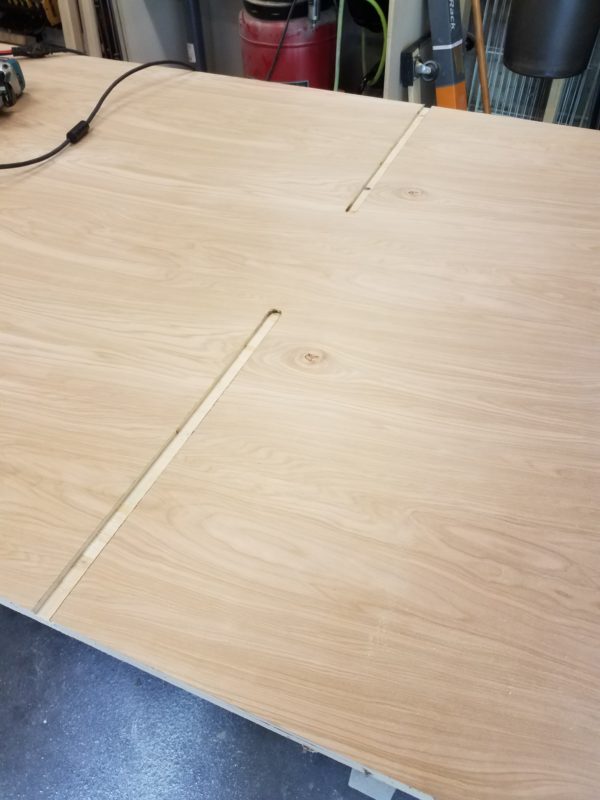 While I was cutting the rabbets along the edge the bit wandered out from the collet of my router and my rabbets ended up being deeper than I needed.  Turns out you should leave a little space between the bit and the collet, say ⅛ if an inch or so. Thank you Internet for that tip. So to fill in the void, I just glued some scrap wood into the rabbet – 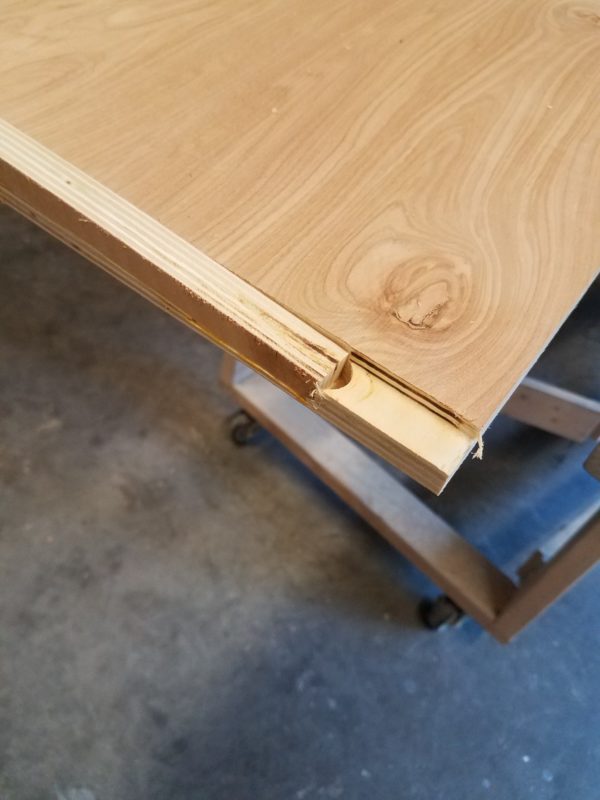 And then rerouted the rabbet – 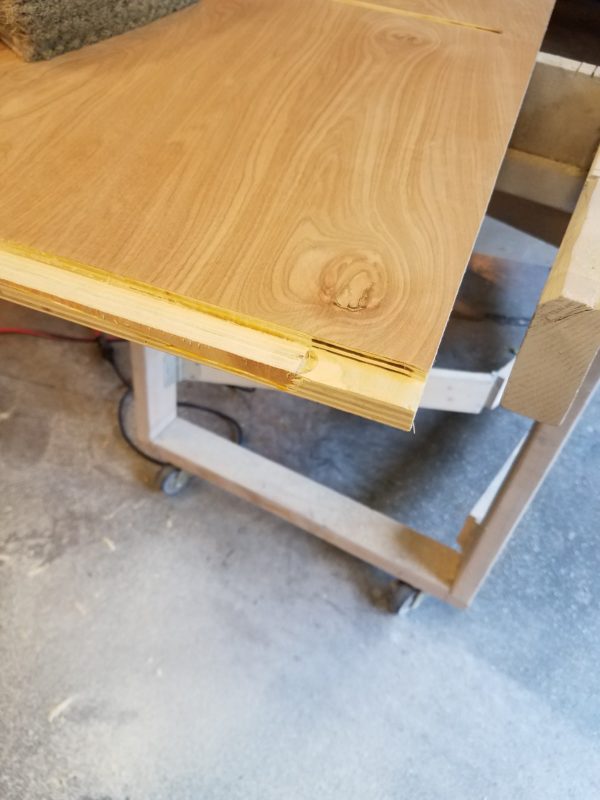 Next I glued the back, sides, and shelf together- 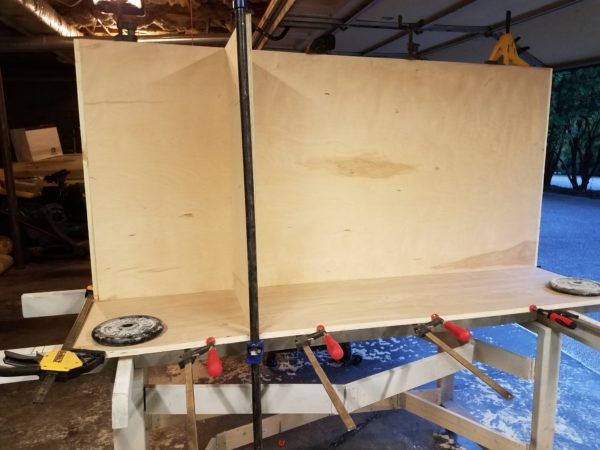 But had to improvise with some of my clamps because I didn’t have enough of the right size. Well actually, I had plenty of 36 inch clamps, I just made the width 37 inches so I couldn’t use them (stupid math). 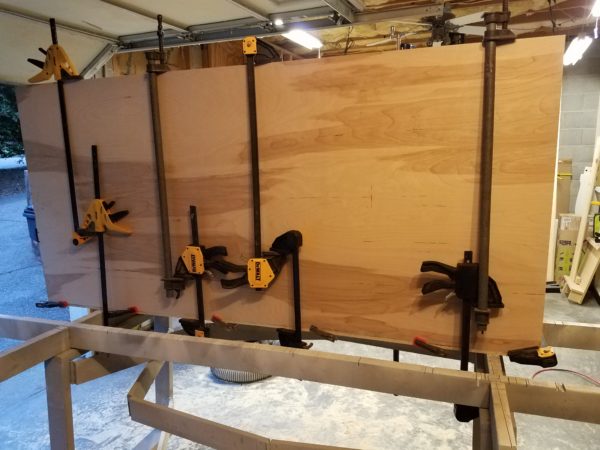 So everything was going smoothly until I saw this – 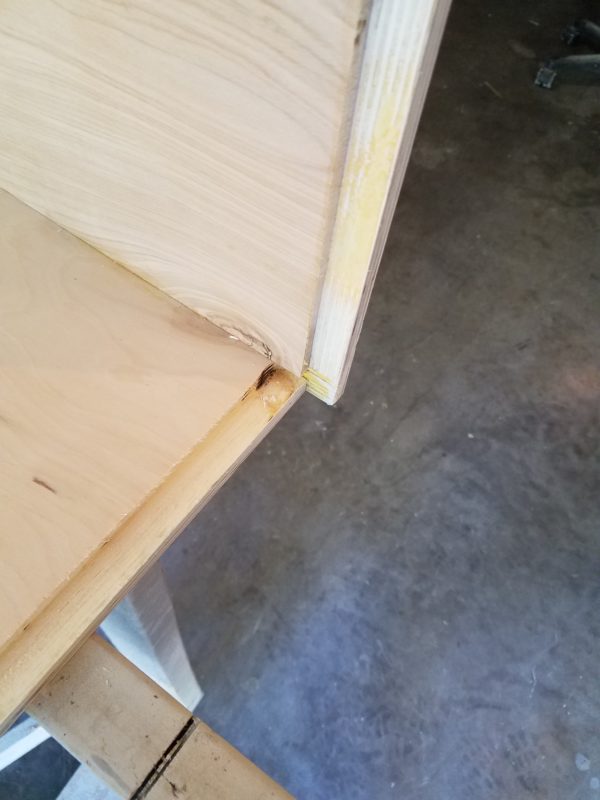 Oops. Fortunately the piece in the picture that is too long is actually too long so after a trim with the circular saw, another pass with the router, and some chisel work where the router couldn’t reach all was good.

More clamping and glueing for the top and bottom pieces – 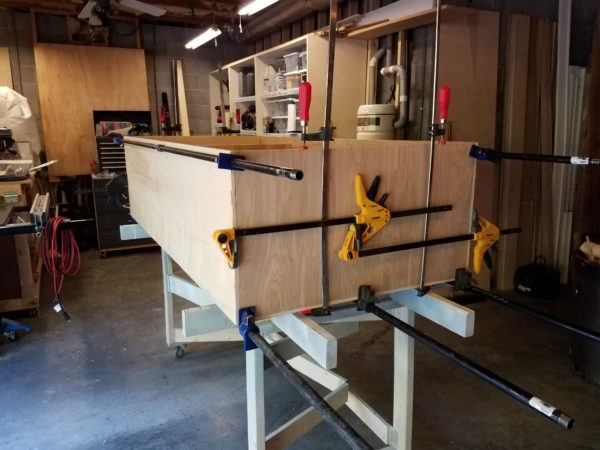 And now for the final test – 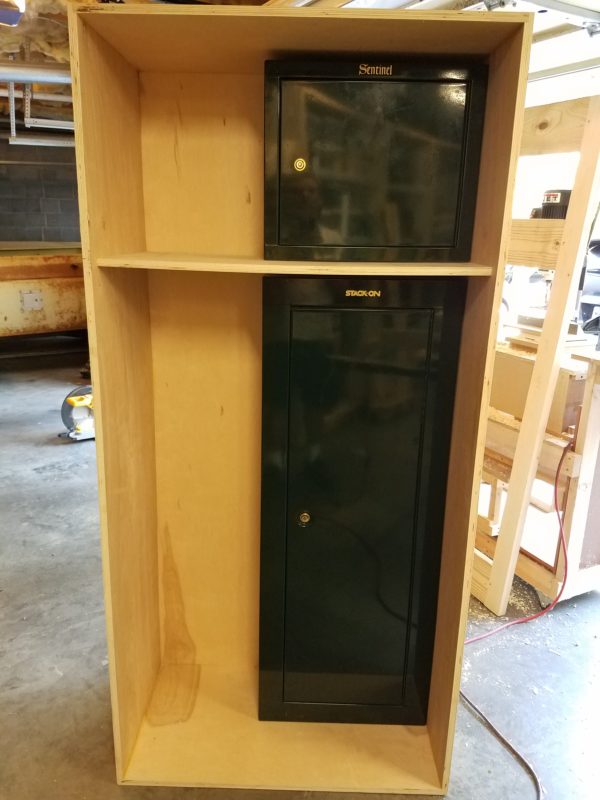 If you are not familiar with these green cabinets there are holes in the back to mount them to studs or something that will keep them from wandering off. The ¾ inch plywood wasn’t going to be enough so I decided to build a frame that I could lag bolt the cabinets to. 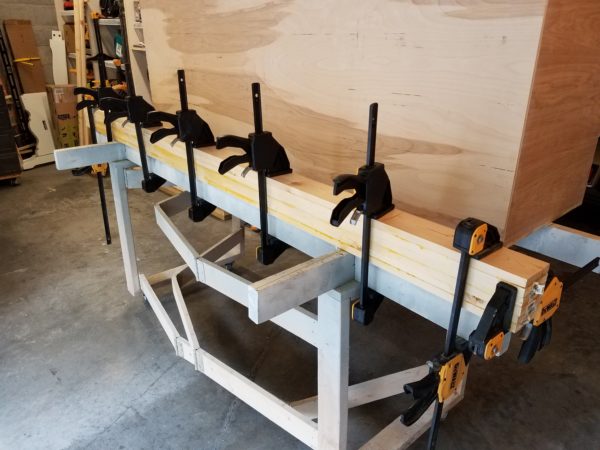 But I ended up gluing them together – 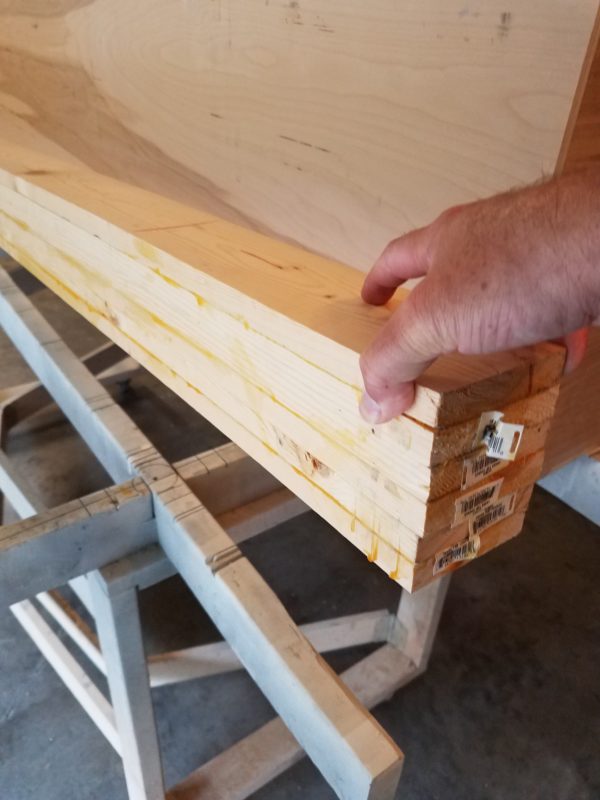 Fortunately it was just a few drips of the squeeze out and they came apart pretty easily. When building the Murphy bed I used pocket screws, but decided I would do mortise and tenons for all of the pieces – 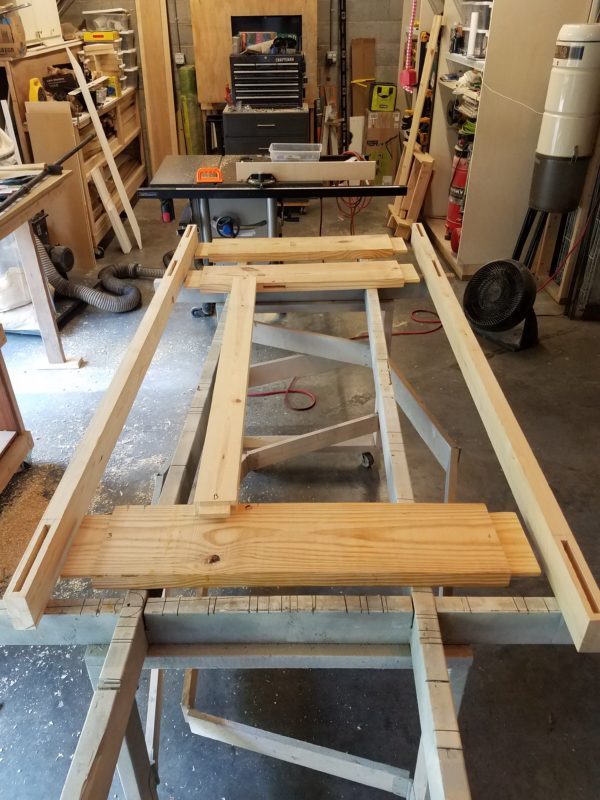 I have a mortise machine which made that task easy, and each mortise only required a little bit of cleanup. I measured for the mortise and realized it was going to be shorter than I wanted, so I scribbled out the line and then redrew where I wanted it. I somehow still stopped at the scribbled line? 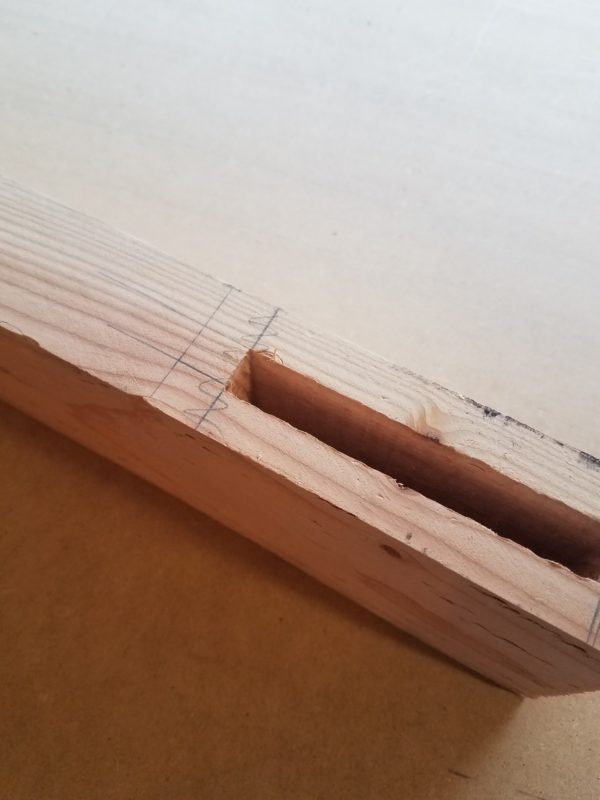 For the tenons I just used a dado stack on my table saw and used a block plane and a chisel to get them to size. 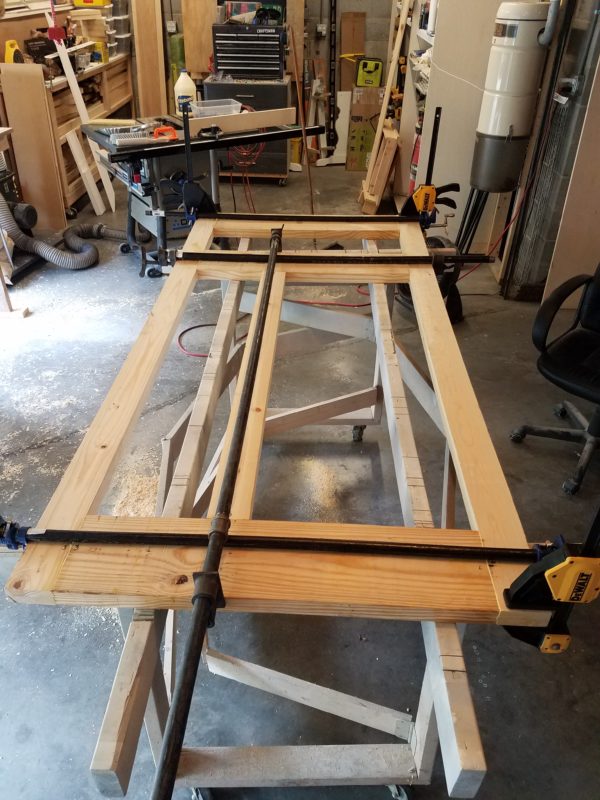 The 2x8s are located where the lag bolts for the cabinets will go, and the stile in the center is offset so I can screw some standards in for adjustable shelving. I added a base to accommodate some casters so I can roll it around – 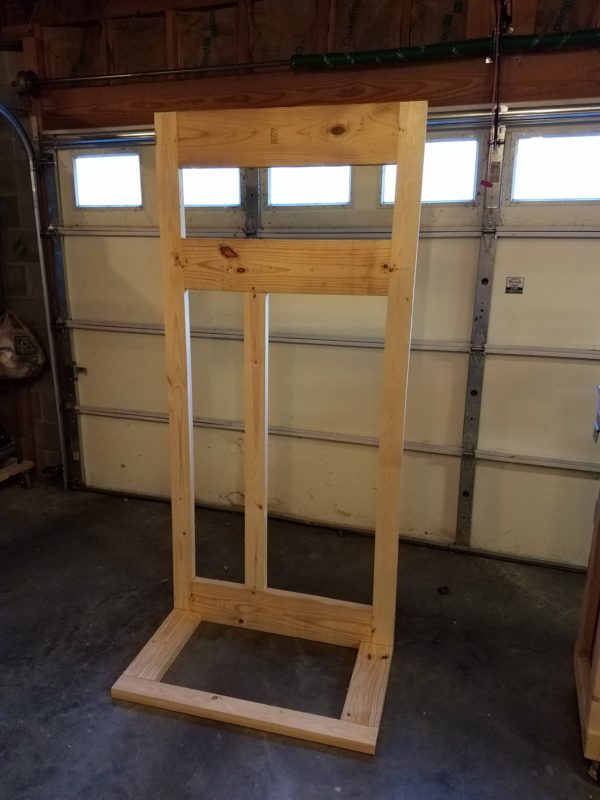 The bottom attached with some through tenons which I have never done before. I couldn’t use the mortise machine so I did these by hand with a drill and chisel. They’re not as clean as the machines mortise, and I should have used a backer to prevent chipping where the bit came through – 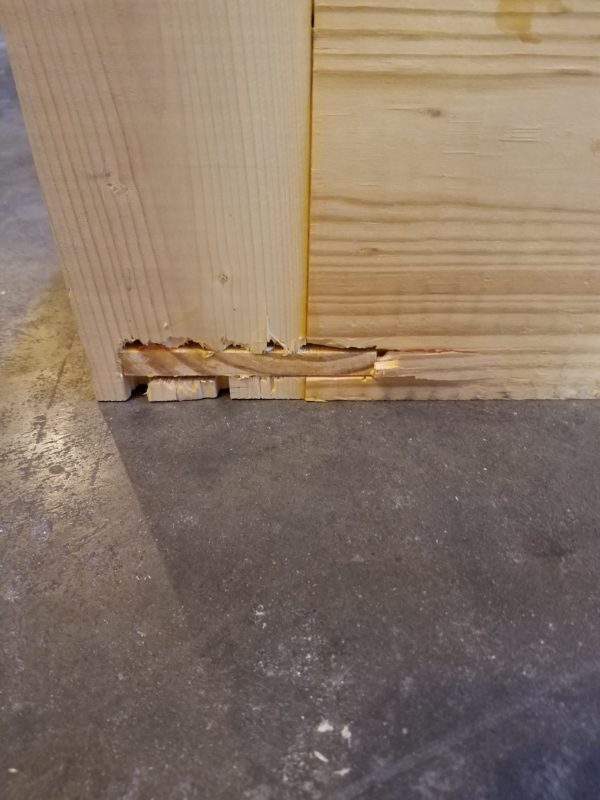 I added some glue to fill in the void, plus I used construction adhesive to glue the case to the frame so it’s pretty sturdy – 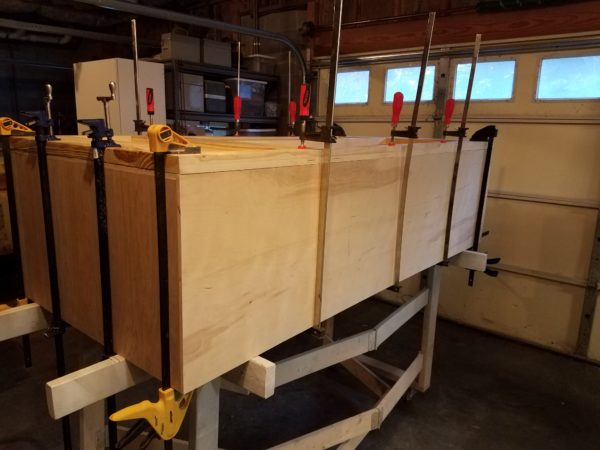 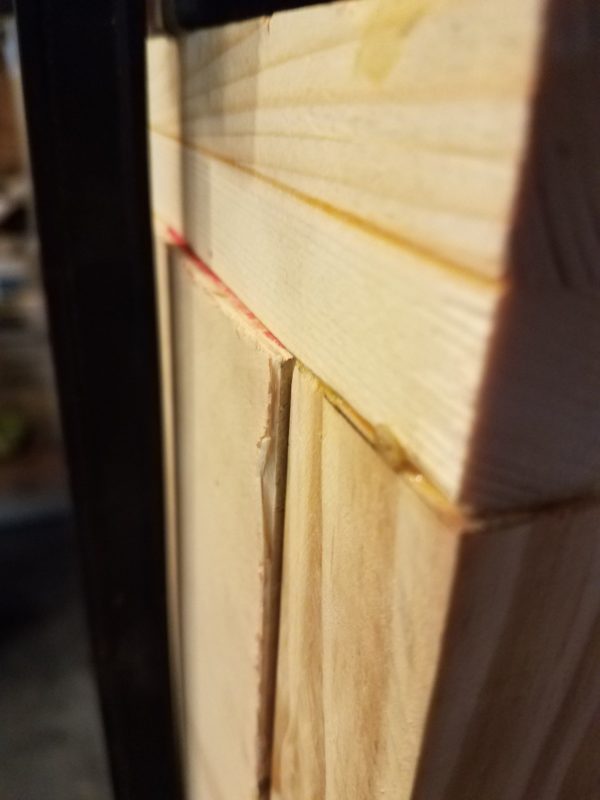 The above picture shows the case sticking out a smidge from the frame. It’s not enough to be mad about, and I think if I built it differently and paid more attention to each piece I could have gotten it spot on.

Part 2 will have the trim work, plus the door, and hopefully paint.

Now what to replace my AR-15 with? The one I had used a composite lower from Cavalry Arms which is no longer in business. It had the iron sights and the handle, and I thought about buying one with a rail to mount an optic light a red dot or something. Any recommendations would be appreciated.