Resolved:  The 1851 Colt Navy is the standard by which all succeeding single-action revolvers must be judged.  Now that that’s established, let’s take a look at this ground-breaking product of the mind of Colonel Colt, how it changed forever the concept of what a revolver should be, and how it affected every single-action sixgun model that followed – including its famous offspring, the Single Action Army. 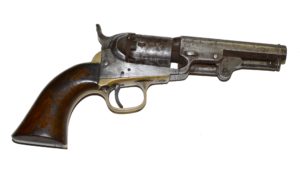 Colt’s production of revolvers up to this point had not yielded a reliable, effective piece for belt holsters.  The Paterson guns were underpowered and had fragile folding triggers; their popularity was mostly due to their being the only effective mass-produced revolver available in the 1830s and 1840s.

The Paterson guns had five-shot cylinders, but prudence dictated loading only four and leaving the hammer down on an empty chamber; this precaution was required for Colt revolvers up to and including the Single Action Army.  Further, the Paterson guns were loaded using a separate tool for seating bullets.  If that tool was lost, what the shooter was left with was an expensive and rather ineffective hammer.

The later Colt Walker and First, Second and Third Model Dragoon revolvers were significant improvements.  They had a loading lever attached to the gun under the barrel.  They were also big, powerful guns, firing a .44 caliber ball propelled by a stiff charge of black powder from a six-round cylinder.  The Walker and Dragoon guns were reliable and powerful, but they were also heavy and cumbersome, so much so that many were fitted with shoulder stocks, making rather effective carbines.  But it’s important to note that these were, as named, dragoon pistols, meant to be carried in saddle holsters by mounted troops.

Contemporaneous with the Dragoon guns were a small selection of Colt “Pocket” revolvers, .31 caliber six-shot revolvers that began with the 1847 Baby Dragoon and continuing with the 1849 and 1850 Pocket Models.  These were, effectively, scaled-down versions of the Dragoon pistols.  Barrel lengths ran from four to six inches, allowing for a decent sight radius for the small-framed guns, but the .31-caliber cylinder put them back in the Paterson level for power; most loads yielded performance roughly equivalent to a modern .32 ACP full-metal-jacket round.

So as of 1850, your choice in Colt revolvers faced a strange dichotomy; you could either have a big, powerful, heavy horse pistol, or a pocket-sized pipsqueak.  Clearly something new was needed.  Colt decided the answer was obvious:  Split the difference.

In 1851 Colt revealed their new gun.  The 1851 Colt Navy revolver was a scaled-up 1849 Pocket Model, but it differed in several significant ways:  It fired a .36-caliber ball, yielding power roughly equivalent to the later .38 Special 158-grain RNL standard loads; it had a 7 ½” barrel, yielding a good sight radius while maintaining portability; and it was lighter than the Dragoon models, making it easily portable in a belt holster.  It did retain the odd sighting arrangement from the earlier guns, using a small conical brass front sight and a notch on the hammer as the rear sight; despite the rather crude sighting arrangement the new gun quickly developed a reputation for accuracy.

Another innovation, oddly, didn’t quite catch on; some early Navies were made with a “safety peg” in between chambers on the six-shot cylinder that fit into a recess on the hammer face, allowing the gun to be safely carried with all six chambers loaded.  For some reason this feature wasn’t carried over into later models, and even the famous Single Action Army is only safely carried with the hammer down on an empty chamber.

The new revolver was well received, and with good reason.  It was more powerful than the Pocket Models or the Paterson guns, while still being light enough to allow easy carry in a belt holster.  Its grip frame, adapted from the earlier guns, was designed for a one-hand shooting style, making it easily usable either on horseback or on foot.  Further, the curved grip meant that, like later single-actions from Colt, revolved upwards on recoil rather than slamming into the web of the hand.  This made follow-up shots a fraction slower but was much easier on the hand and wrist in repeated shot strings.

While the majority of Colt Navies were made in the Colt works in Hartford, Connecticut, some were also made in the London Armoury near Vauxhall Bridge; a few other copies were made in Belgium and (unlicensed) in Russia.  They say imitation is the sincerest form of flattery, and that holds true for guns as well as people.  During the war, the Confederate Army widely used the Leech & Rigdon revolver, an unlicensed copy of the 1851 Navy made in several locations throughout the war.

Interestingly, the appellation “Navy” was not intended to denote a sidearm designed for naval use.  In fact, the production 1851 Colt revolvers cylinders were engraved with a scene of the victory of the Second Texas Navy at the Battle of Campeche on May 16, 1843; this decoration was intended to commemorate the Republic of Texas’ purchase of Paterson Colt revolvers, which was Colt’s first major commercial success.  In fact, most of the Colt Navy revolvers were sold to Army and civilian customers.

The 1851 Navy proved a great commercial success, remaining in production until 1873, when its niche as a fast-handling holster gun was taken by the next Colt Legend:  The Single Action Army.  It’s important to note that while the SAA improved in several ways over the Colt cap-and-ball guns, it retained the grip shape introduced with the Colt 1851 Navy.  You don’t mess with success, and it was largely the shape of the grip that made the Navy handle so well. 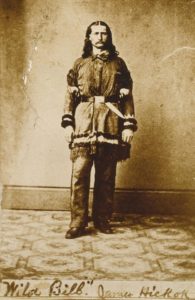 Wild Bill with his pair of Colt Navy revolvers.

During the years leading up to the Civil War, the 1851 Navy gained a strong following.  The new gun was popular among outdoorsmen and Army officers, but it also gained a powerful following amongst professional guntwists and outlaws.  Why?  The Navy Colt, even today regarded as perhaps the best-handling single-action sixgun ever made, was the ideal model at that time for the gunfighter.

The 1851 Navy was the best sidearm yet made for the guntwist.  It was lighter than the Dragoons and thus faster to place into operation.  It was more powerful and, with a longer sight radius, more accurate than the pocket models.  It could be carried on a saddle or in a belt holster and was slim enough to be well concealed beneath a long coat or vest if one was of a mind to do so.

Bill Hickock and the Navy Colt

Wild Bill would be a great subject for a future Profile in Toxic Masculinity, but a lengthy discussion of his life is probably well outside the scope of this article.

Suffice it to say that Hickock was one of the more notorious figures of the Old West; in his career he worked as a scout for the Army, a cattle drover, a wagon master, a lawman, a gambler and, not least, a gunfighter.  He was involved in several high-profile gunfights and was said to prefer the Navy Colt for its power, light weight and accuracy.

Unlike many of his contemporaries, Hickock took shooting seriously as an art unto itself, reportedly practicing quick-draw, rapid-fire and slow fire for an hour or more each day.  This served him will on July 21, 1865, when he took part in one of the few actual, recorded instances of the kind of quick-draw duel generally only seen in movies. 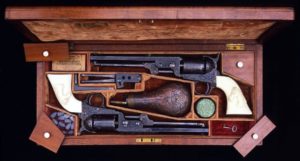 On that day Hickock was playing cards in the Lyon House Hotel in Springfield, Missouri.  Another gambler, one Davis Tutt, stood nearby.  Tutt was known to dislike Hickock and was continually lending the other gamblers money as they continued to lose to Wild Bill.

One thing led to another and, eventually, the two repaired to the street to settle their differences.  They faced each other at the range of 25 yards; when hostilities commenced, Hickock drew his Navy Colt and promptly plugged his adversary between the fifth and sixth ribs.  Tutt shouted to his friends, “Boys, I’m killed,” and collapsed.

Eventually Wild Bill was himself killed over a card game, yielding the famous “dead man’s hand” legend, but his death was not due to any failure of his pair of Navy Colts, who continued to serve him well until the end.

There are a wealth of 1851 Navy replicas for sale today.  Colt themselves reintroduced the 1851 Navy in the late 1970s and made them for a while, but it was a pricey item and had difficulty competing with the many cheaper versions.  I had one for a while, a brass frame model made by an outfit called Early Modern Firearms (EMF), about which I’ve written here before.  It was a neat piece and I shot it until the brass frame deformed so badly that it wasn’t safe to operate. 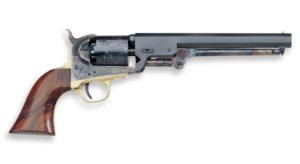 Uberti makes a great steel-frame replica.  So does Cimarron.  There is a wealth of replica guns on the market, but I’d give one precautionary note based on my own experience:  Avoid the brass-frame guns if you intend to do a lot of shooting.  A steel-frame gun will last a lot longer.

As time goes on, I’m thinking more seriously of picking up one of the Uberti replicas.  I’ve handed a few Uberti guns and find them to be excellent pieces, and I still remember my original Navy Colt replica fondly.  As I’ve written before, it was light, accurate, fast to clear leather and slick as a snake.  Even at the age of fourteen, when I bought the gun and started practicing quick-draw and reflex shooting, I could easily see why the old gunfighters preferred this piece.

The 1851 Colt Navy was a ground-breaking gun, one which set the pattern for all single-action sixguns that followed.  It was a seminal piece, changing the sixgun market and the expectations of sixgun shooters more than any preceding gun.  The Navy Colt also had long-lasting impact on sixgun design, not just by Colt but also Remington and later, Ruger, as well as Great American, Cimarron, Uberti and other replica makers; this qualifies it as the Gold Standard of single-action revolvers.

So, imagine my surprise when I found out that Cyber Monday didn't mean hanging out in chat rooms looking for…

[caption id="attachment_50018" align="alignleft" width="137"] A pleasant surprise[/caption] The Texans took down the Patriots. The Ravens won a colossal game. The…