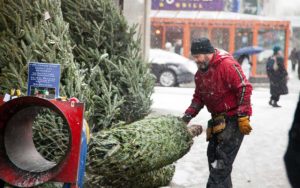 In the early nineteen nineties I had the opportunity to make money for college, experience the thrills of the big city, and learn lessons of free market capitalism. All it required from me was twelve to twenty-four hour workdays laboring outside in the elements, dealing with muggers, crack heads, hookers, pimps, petty thieves, and worst of all the New York City consumer during the holidays. I experienced the best and worst of the city, my co-workers, managers, and citizens during the weeks between Thanksgiving and Christmas Eve. This is a memoir with stories across three years consolidated into one narrative.

The Pitch and the Gig

My buddy Dean worked at a family-owned landscaping business that had a nursery and tree farm. One Friday we were hanging out drinking some vile beverages, smoking cigs, and shooting the shit.

Dean said to me, “Time, do you want to make some money this weekend? It’ll be a blast and we can drink when we get done.”

For some context — Time is habitually poor, a freshman in college, and working multiple part-time jobs under the table. Dean told me they needed someone at his job to help drive and unload a truck of Christmas trees from the nursery to a bunch of tree stands in New York City. Dean began the sales pitch.

“The job pays seven dollars an hour, my boss will buy us a bunch of drinks and food when we get there, then we drive home the next day with all the cash and receipts from the stands.”

I responded, “I’m in Deaner, I’m free this weekend and I’ve never been to New York City unsupervised”.

Over the next several weeks I went from being hired labor for the weekend, to staying for the rest of the holiday season selling and delivering trees at several of the stands. Over the next three years I was managing a stand, delivering and setting up decorations at a few really wealthy clients’ homes, and trying to study for midterms during the chaos. 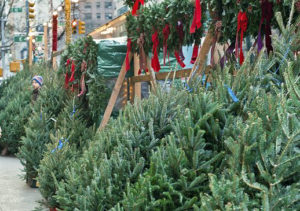 My first tree gig had Deaner and me taking a stake-body truck full of trees from the farm in rural Pennsylvania to New York. We had an uneventful two-hour drive and arrived at three in the morning. We drove into upper Manhattan across the George Washington Bridge, down the Westside highway, and promptly double parked on 110th Street between Riverside Drive and Broadway.

As we exited the truck I was hit with a brisk wind blowing off the Hudson cutting through the large buildings. It’s was about thirty degrees but the wind chill was substantial. I felt apprehension and excitement as I walked into the street and on to the sidewalk. Till now I’ve only visited New York as a teen during school field trips.

In my head I’m saying to myself, “I’m in the big city at three in the morning, woohoo!”

There was still quite a lot of activity and lights from businesses on Broadway even at this late of an hour. As I looked down 110th street it was comparatively dark, but I could see the yellow glow of a cathedral in the distance with an outline of dim street lights.

The tree stand was halfway down the long city block on the right side of the street, the sidewalk was now a narrow walkway surrounded on both sides by upright Christmas trees each with an X-shaped, two-by-four base that was nailed to the trunk. There was also a short pile of twenty twine-bound trees near the back of the stand. Each tree had a two-part tag with a price and description of the type of tree on both halves. There was a hut near the middle of the stand made of two-by-fours and opaque plastic sheeting with a single bulb inside. Near the hut was a green wooden table with a red tree funnel and bailing netting. As Deaner and I walked up to the hut, he and I noted that there was a person inside and he was not moving.

Deaner gave me the fingers to the lips “shush” gesture, he grabbed a base from the pile, snuck up to the hut, and then violently pounded the base against the frame of the hut and screamed.

“Give me all your money, Mutha Fucka!”

We saw the obviously sleeping figure bolt upright and start to stumble around the hut while stammering.

Deaner yelled out, “relax Jerry, it’s Dean, you need to stay the fuck awake or you’re going get rolled and cleaned out.”

Jerry popped his head out of the hut and put on a goofy smile.

Shortly thereafter, recognition pushed through the resin in his brain.

Jerry turned towards me and said, “Time, woooww man, how’d you get here?”

Jerry and I were acquaintances from high school. He’s one of those permanently stoned, even when he’s not, Grateful Dead loving, harmless hippies that everyone of a certain age had in their high school.

We collectively tried to wake up by grabbing a smoke and a cup of instant coffee from the hut. We then unloaded forty or so trees from the truck.

We drove to and unloaded trees at two additional stands on the West Side of Manhattan with the help of the night guards in various states of consciousness. Deaner and I got in to the truck after the third stand was resupplied.

Deaner responded back, “we gotta get to the other two stands but they’re on the East Side.”

Neither I nor Deaner knew this at the time, but there were only a few ways across Central Park from the West Side to the East Side, you could go around it or take two or three cross streets. I read from an Exxon map that there was a crossing at 65th street that seemed convenient since our next stand was on 66th and Lexington.

Deaner responded, “will do, Time” as he turned into the park. 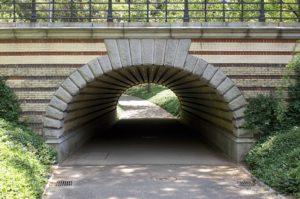 We were accelerating as we plunged into the relatively dark park in the middle of the bright city center. Everything was going well until we saw a stone tunnel under an overpass fast approaching. We were going way too fast and ignoring signs of clearances and no commercial traffic warnings. Dean and I looked at each other for a split second in shared horror.

Deaner shouted out, “Fuck It!” Then he hit the gas.

The two by four stakes sticking up out of the top of the truck hit and sheared off one at a time as we shot through the tunnel. We stopped for a quick second after exiting the tunnel and I checked the load. The trees were still in the bed of the stake body but all of the stakes were broken off the truck and laying in the tunnel. There was no sense in waiting to be arrested or having the truck impounded.

I turned to Deaner and yelled, “Let’s get the fuck out of here!”

So we got back in the truck and continued on our way.

We arrived at the last two stands, unloaded the last of the trees, and drove back to the first stand on 110th street to park it for the rest of the morning. We then walked to meet the boss for breakfast to provide an inventory of the deliveries at each stand. Before we arrived at the restaurant we both agreed that the tunnel incident never happened. 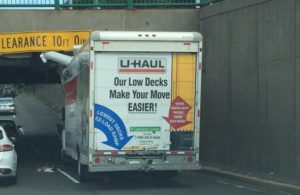 Dean and I walked a few blocks down Broadway to Happy Burger on 93rd to meet the boss, Don, or as Dean called him, Uncle Donny. He was not his actual uncle but he saw him as a bit of a mentor and comic figure. Happy Burger was a greasy spoon restaurant that served huge burgers and great breakfasts. We walked into the dim back of the restaurant and I see a skinny older man dressed in clean work clothes, wearing a stocking cap, smoking a Kool, and holding a thermos mug. He had wispy gray hair, glasses, and a stern look on his face. He was surrounded by several grubby looking tired guys eating breakfast and talking. As we approached the table, Donny’s face changed to a smile as he called out to us.

“Well hello Deany my boy, is this your man Time you told me about?”

Dean introduced me to Don and the table of stand managers. Don invited us to sit down as he began talking to me.

“So Timey how was your drive in, do you like the city, are you busy the next several days or weeks?”

After each of my responses Donny would respond, “splendid, splendid.”

Don was surly when we arrived because he had just fired two guys that morning and sent them packing to the Port Authority.

Don turned to me and asked in a cultured and intelligent sounding tone, “So Timey how would you like to make some money this week and experience the wonders of New York culture during the best time of the year?”

Deaner turned to me and said he could go to my house, pick up some clothes, and then bring them back on his next trip in.

I turned to Don and responded, “I appreciate the opportunity, but what’s the pay, and where will I be sleeping?” 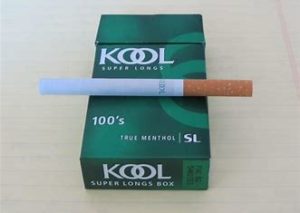 Don responded that the job paid seven dollars an hour excluding tips and that he had paid for a very nice hotel for his people to stay in while they worked in the city. I would also be given a forty dollar advance for expenses and food.

I though it over and decided I would stay the week and try it out.

“I’m in Don, thanks for the opportunity.”

As I shook his hand I got a strong whiff of Scotch and Kools.

“So when do I start, Don?” I responded back.

“Well Timey”, he sang, “better three hours too soon than a minute too late.”

One of the stand managers, Bill, then spoke up.

“He means you need to get your sorry ass over to 110th and Broadway because your shift started thirty minutes ago.”

Deaner and I left the Happy Burger and walked back to the stand at 110th street.

Deaner responded, “You’ll remember this for the rest of your life and if you hustle you’ll make lots of money. So work hard, have fun, but don’t get yourself killed, fuckface.”

Part 2: It’s Good Work If You Can Get It — The Job; My Co-Workers; Hotel Living at its Finest, or Alternatively, Welcome to Hell.

An entity not constrained by time