Trigger warning: images of butchered animal of the porcine variety.

Not unlike the US and the Thanksgiving turkey, Romania has the Christmas pig. As tradition goes, get one before Christmas and eat it head to tail over the winter months. I have covered some of uses of such beasts in my Christmas food post. This has origins in the times when meat was not a regular meal for many most of the year, but winter was a time for feasting and , I assume, the cold meant the meat kept better. While it was done for Christmas since time immemorial, I assume the origins are older. Families would spend all year fattening the critter, to get the proper use of it. There is even a saying “to fatten a pig the night before Christmas” referring to jobs left to late and half-assed in the last moments, often applied to students studying for exams or the process of morning links on certain websites. A fatter pig was prized, as it had higher not-bones to bones ration, and the abundant lard had many uses.

The pig is traditionally slaughtered close to Christmas, on the Orthodox Christian feast day of Ignatius of Antioch, also known as Ignatius Theophorus, which is the 20th of December. That left time to prepare everything, but the meat was fresh enough on the 25th. Since modern refrigeration exists, and people no longer grow their own pig, the date is now flexible.

The habit is still to avoid so called factory farmed animals for this, and many people have a pig guy in the countryside, who raise some 10 to 20 pigs earmarked for various city families. You generally ask for one in the previous winter/spring, so a piglet can be acquired. As such, the day of the kill depends, as all pigs get their turn. This can be time consuming if done traditionally, with the pig seared on a straw fire in order to scrape the hairs, then washed with hot water. The whole affair usually involves many people and mulled Țuică.

Fat has less uses these days, and a fatter pig is sometimes older and harder to process. My family always got a pig in the 100 to 120 kg range, unlike the 200+ of some. After my father died, we no longer bought a pig, but shared one with my aunt and uncle, getting half for me and my mom. Additional things, like extra liver, are bought from the butchers. My aunt and uncle have two children with families of their own who buy 200+ kilogram pigs each, and so extra meat and fat can be obtained if needed.

That being said, this year’s pig was a bit on the small side, at 90 kg, too small to be honest. But it was what the pig guy gave us. Pigs like this, bought whole with bones and guts and everything, cost about 12 Lei (USD 3) per kilogram this year in Romania. So about USD 125 for the half. The pig was split in quarters for easier handling, and here we have a quarter of small pig 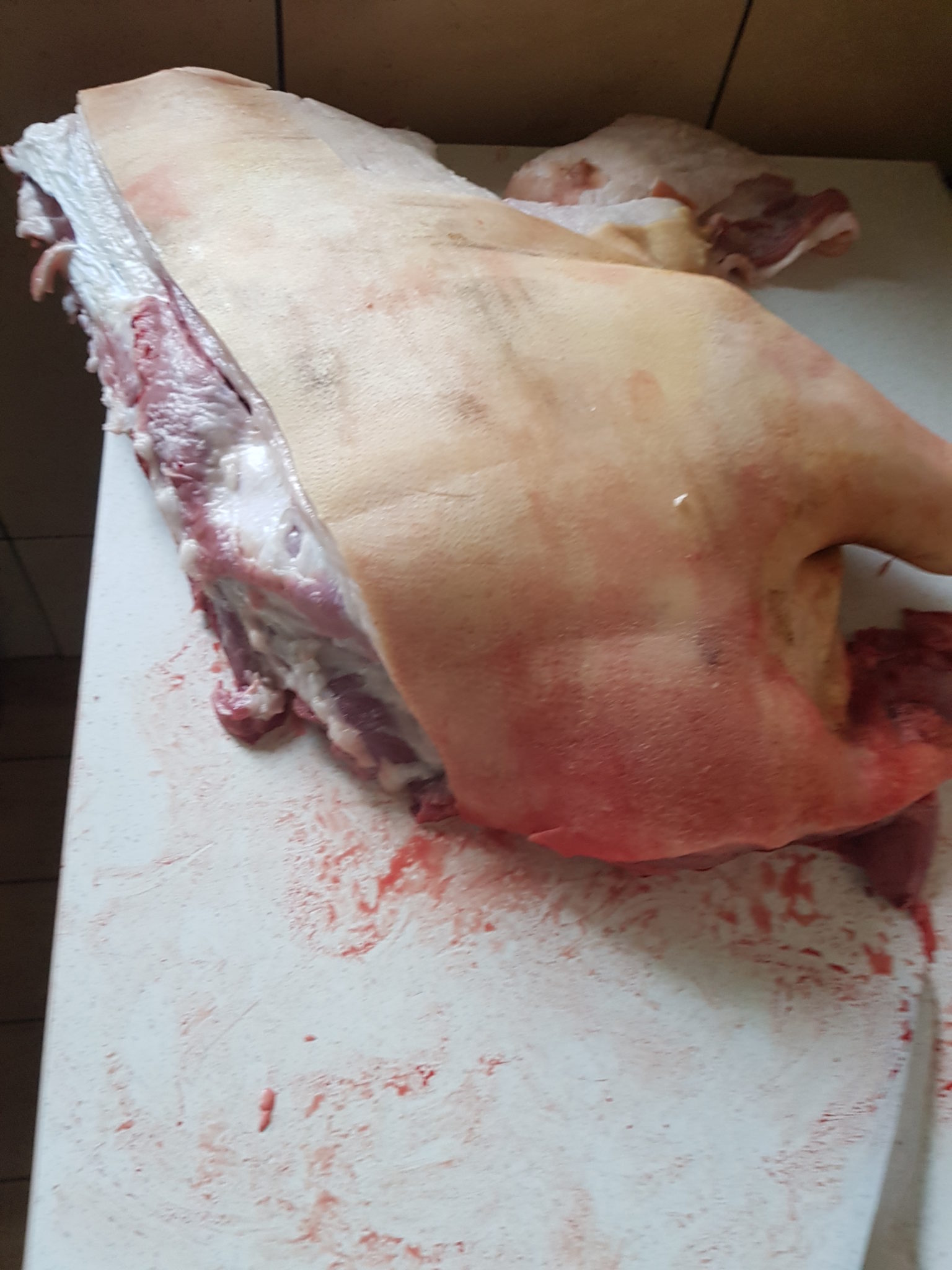 We got it home for the final processing, and these are the images I want to show. Keep in mind this is not how the typical Romanian butcher processes a pig, but how my family does it for the purpose of Christmas. The Day of the Pig day is ended with Pomana Porcului, which translates as the pig’s funeral feast. The Romanian word pomana can refer to either charity in general, or a funeral feast when extra food is made and given to the poor to honor the deceased.

The meat is processed in a few categories.

Some of the skin is taken off and eaten as it is. Not much suet from this pig, but enough it is kept for a bit of dough. Some of the fat is left skin on and processed as slăninuţă (similar to Italian lardo), which is eaten as a cold cut. It is either packed in salt for a while to cure, or smoked, depending on the preference. 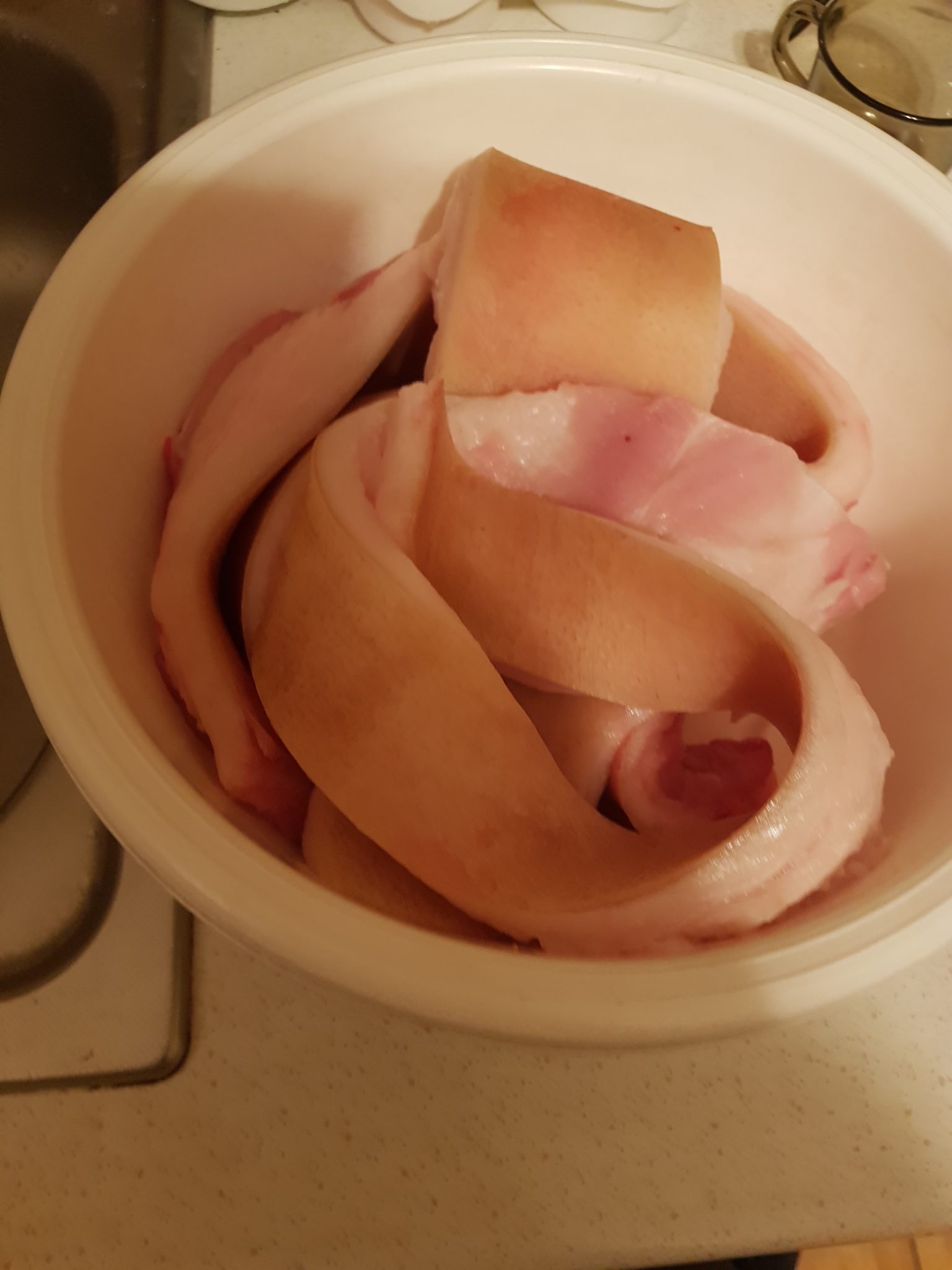 The grilling category has the ribs and the loins. For roasting, the large muscle meat from the ham. Most of the rest and various scraps go towards ground meat for sausage. 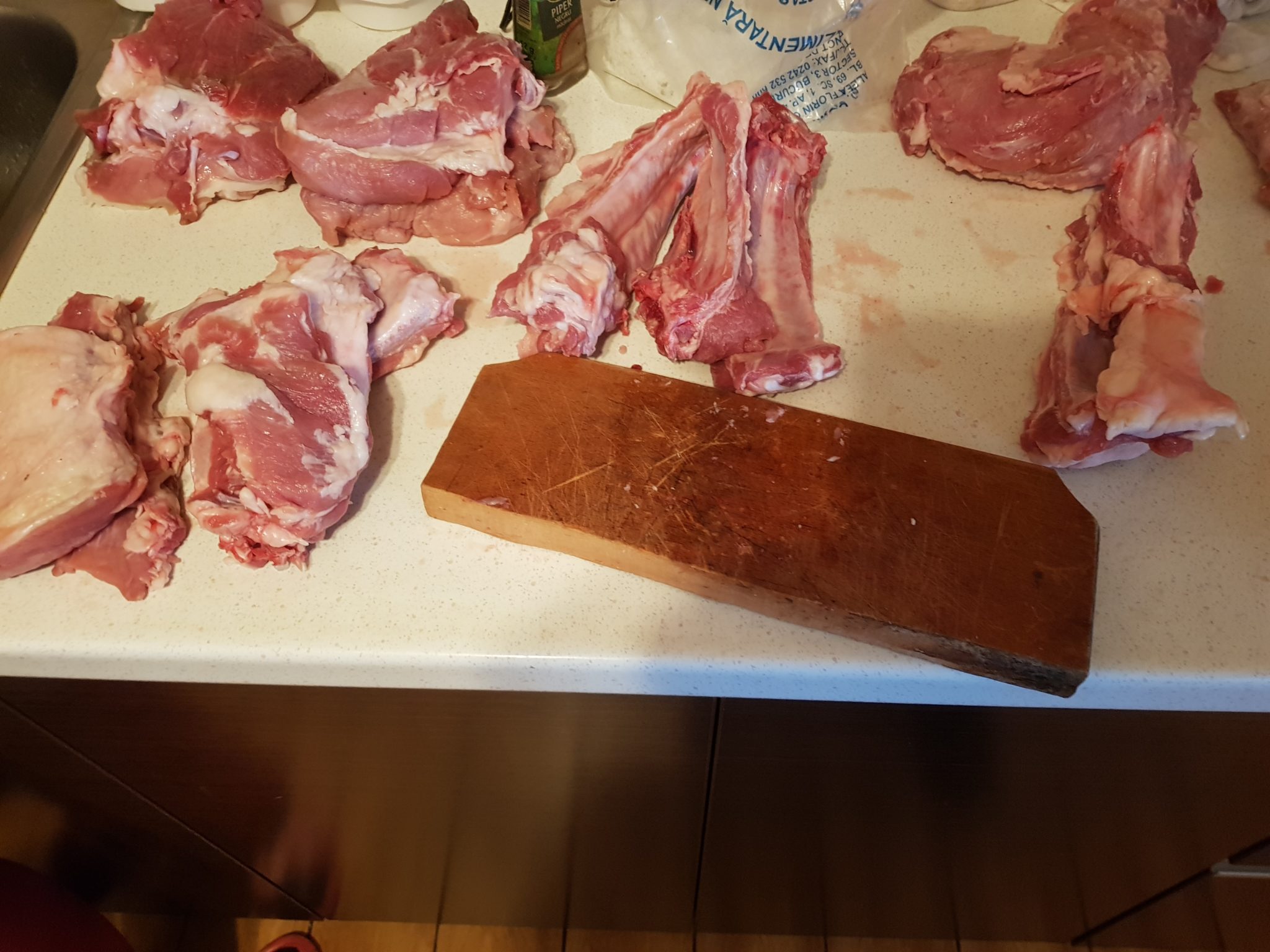 The spine and various bones with remaining meat on them are used for stock or soups. 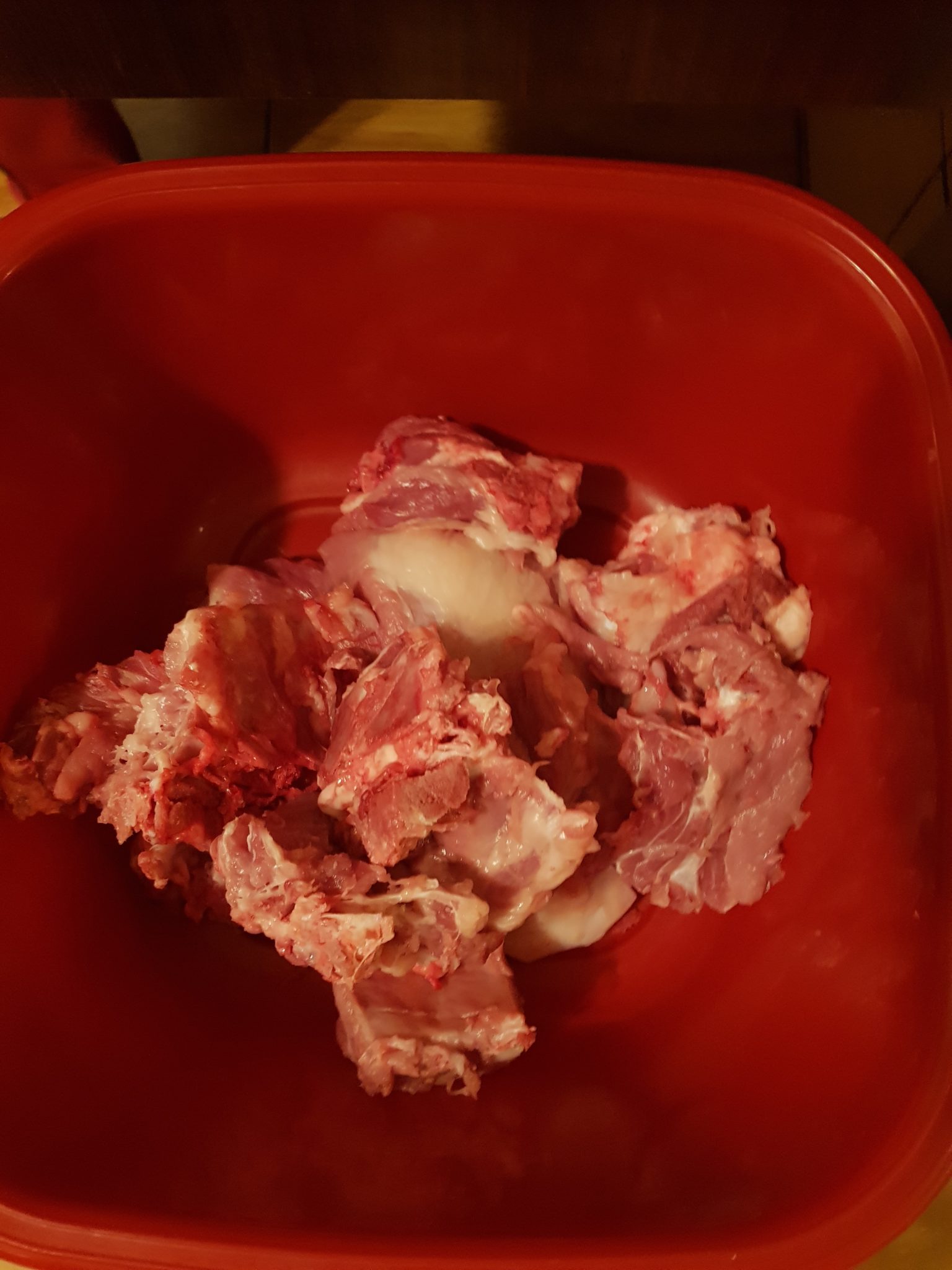 The head, tail and feet are saved up to make headcheese and meat in aspic. 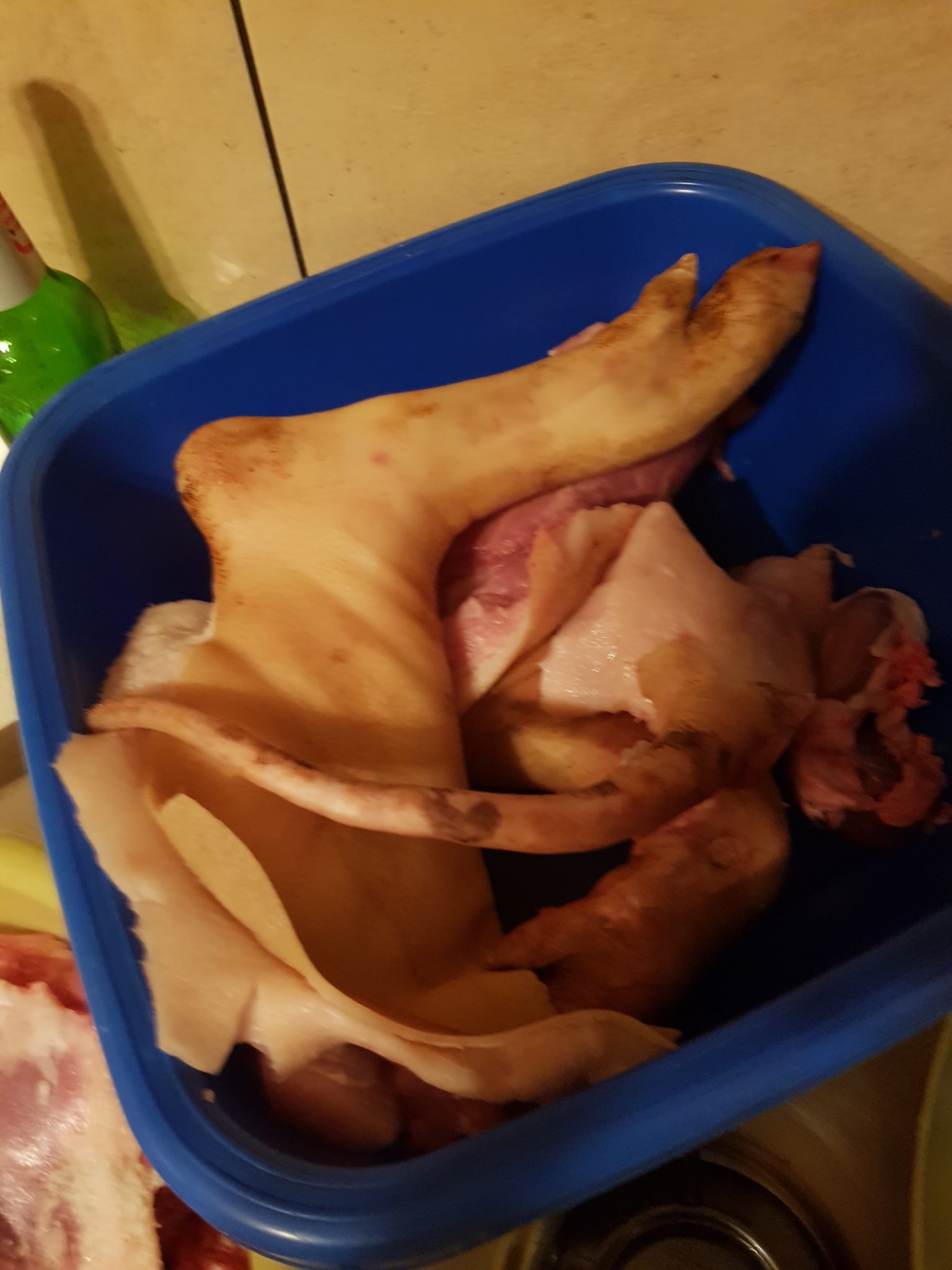 The guts are cleaned for sausage. 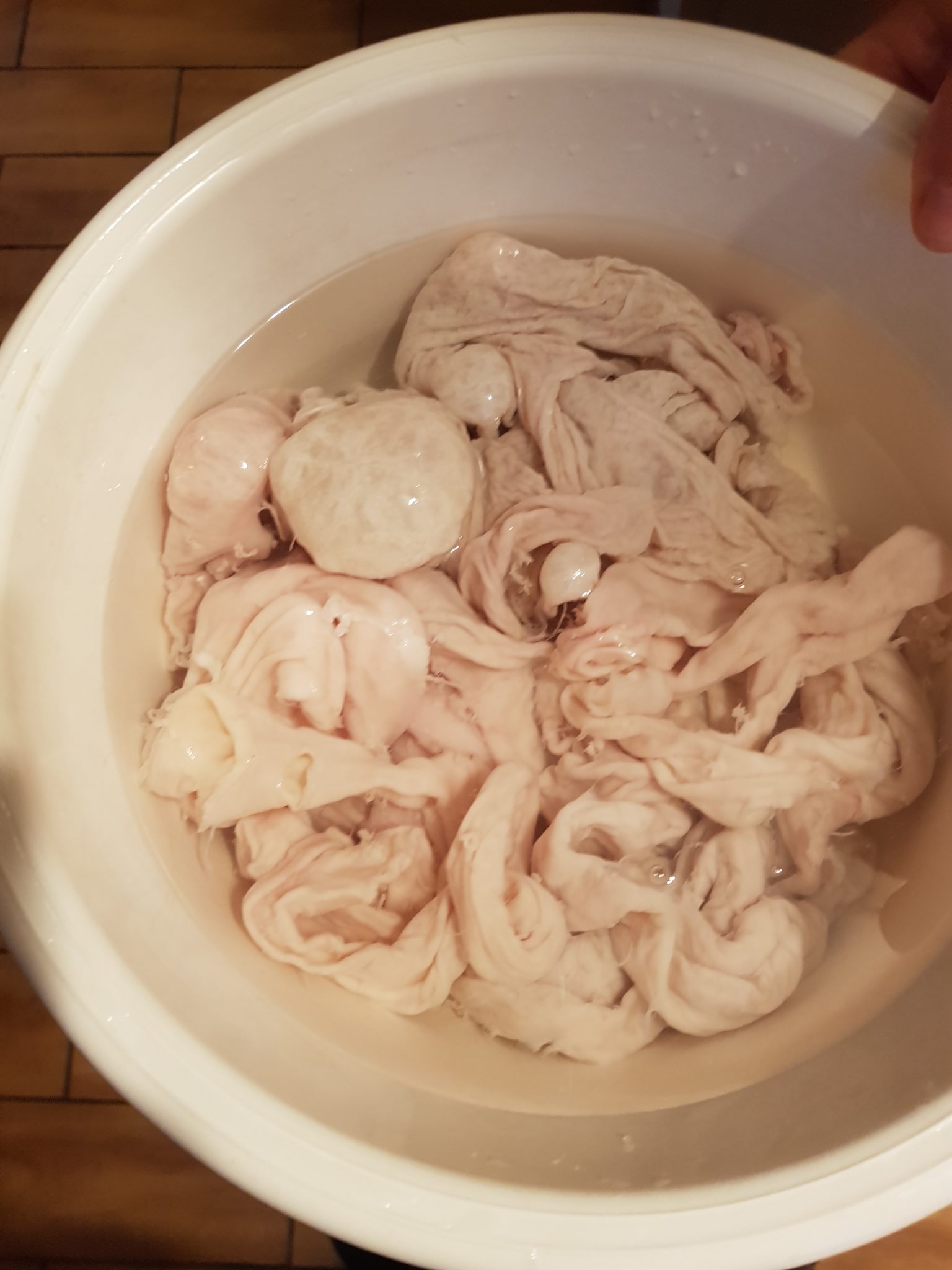 Parts of the fat are melted and used to make jumari and cooking lard. Jumari are a traditional local winter food. How you make them is basically make small cubs of the fat, usually with some scraps of meat remaining. You put them in a pot on the fire, and after about 15 minutes when the fat begins melting, add a bit of water. 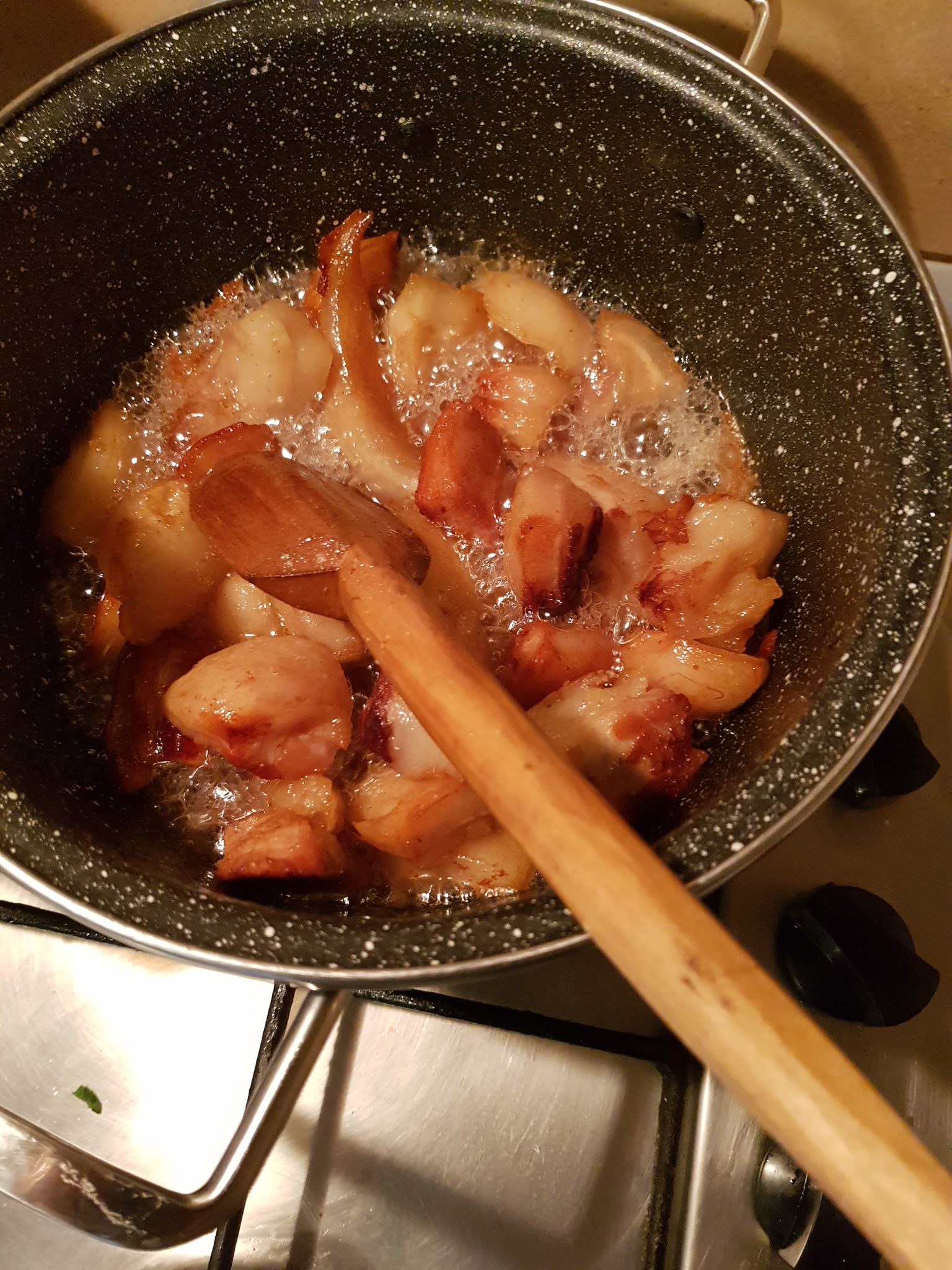 Allow some of the fat to render, and the remaining pieces to get nice and brown, about an hour or so, and you are done. Salt em, eat a few hot and put them in a jar that’s about it. Mmmmm pig fat deep fried in pig fat. 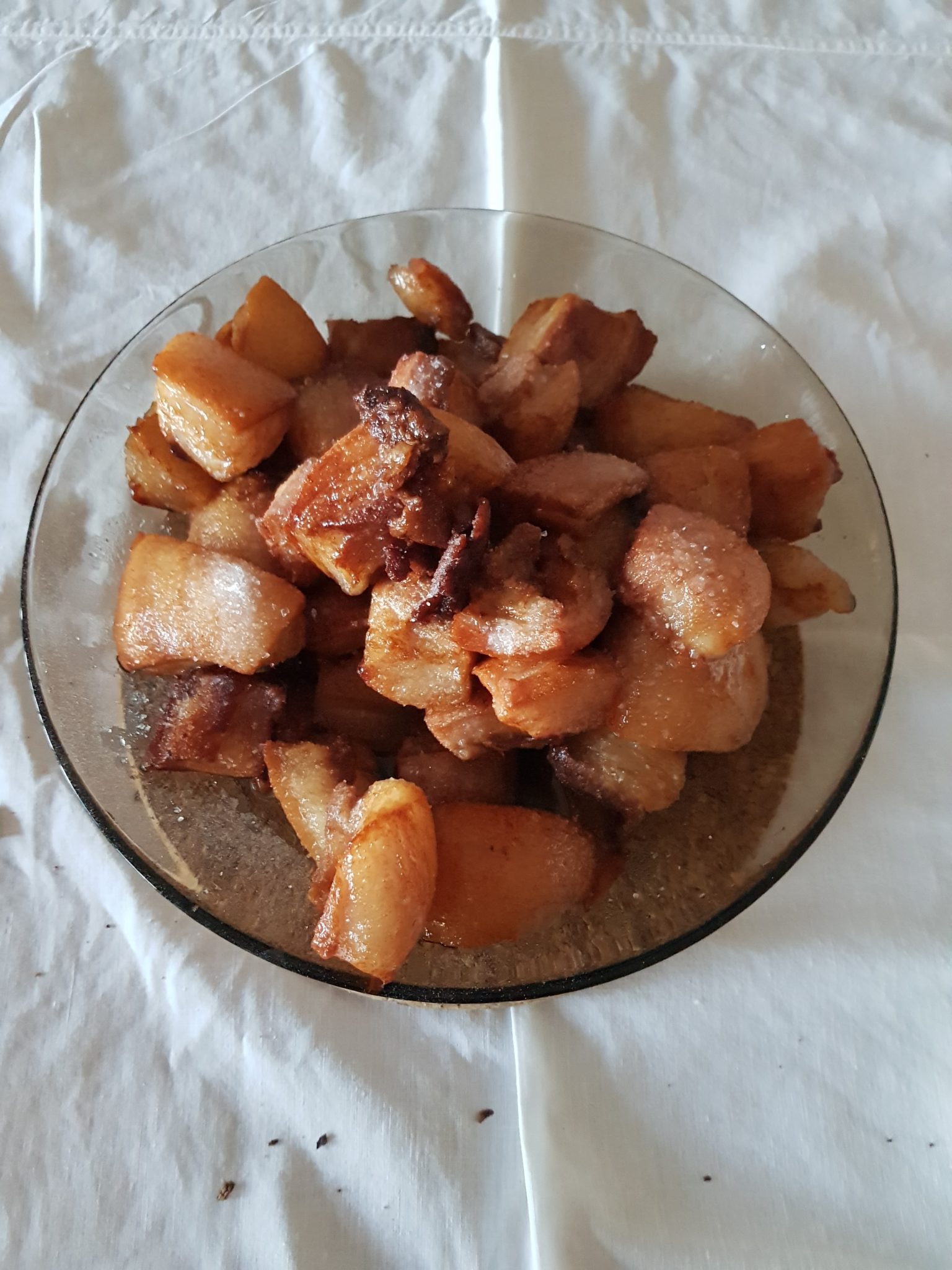 It is fatty, piggy, savory, salty and an acquired taste, in the end. This was originally a preservation method, and it is also done with larger pieces of actual meat, covered in lard – hence the English word larder. This was a staple back in the day, although it is rare and sort of a specialty product these days. Confit de canard, which in some places is a fancy dish, was also meat preserved in lard.  They can be eaten as a snack or used when cooking cabbage or beans, and should keep for several months, especially in a cold pantry. Lard is also kept separately for cooking. 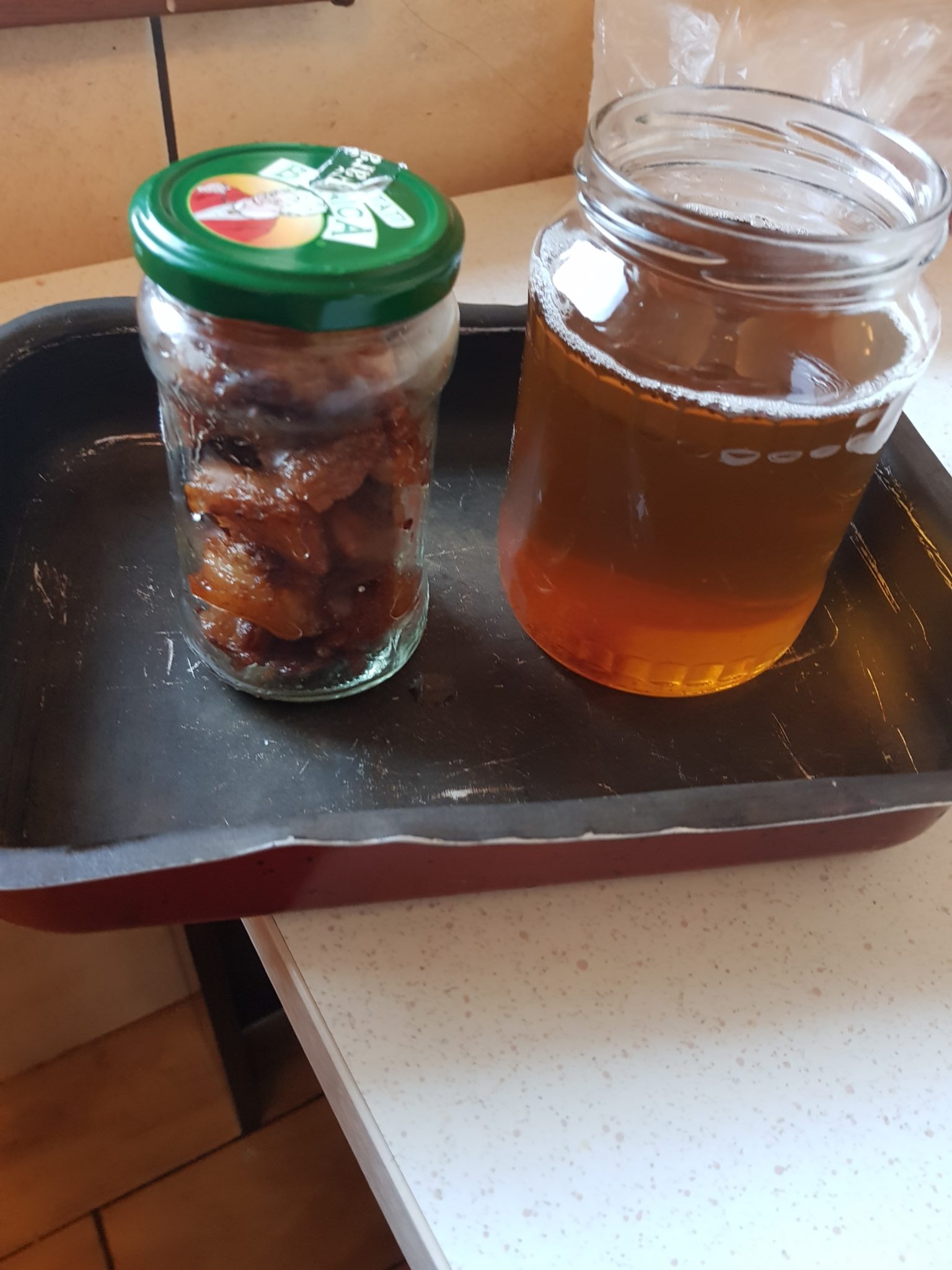 Now on to the meal of the day, it is simple. People are usually tired at the end of the day and do not want to cook something complicated. A few pieces of fatty meat and liver are kept from the pig, fried in a bit of lard, eaten with lots of garlic and polenta. Țuică and wine make an appearance, and usually cheese is on the table because cheese is always on the table in Romania, in this case a very fresh cow’s cheese bought from the same farm as the pig. The meat has just a bit of salt an pepper added, because the point is to enjoy the fresh fatty taste. 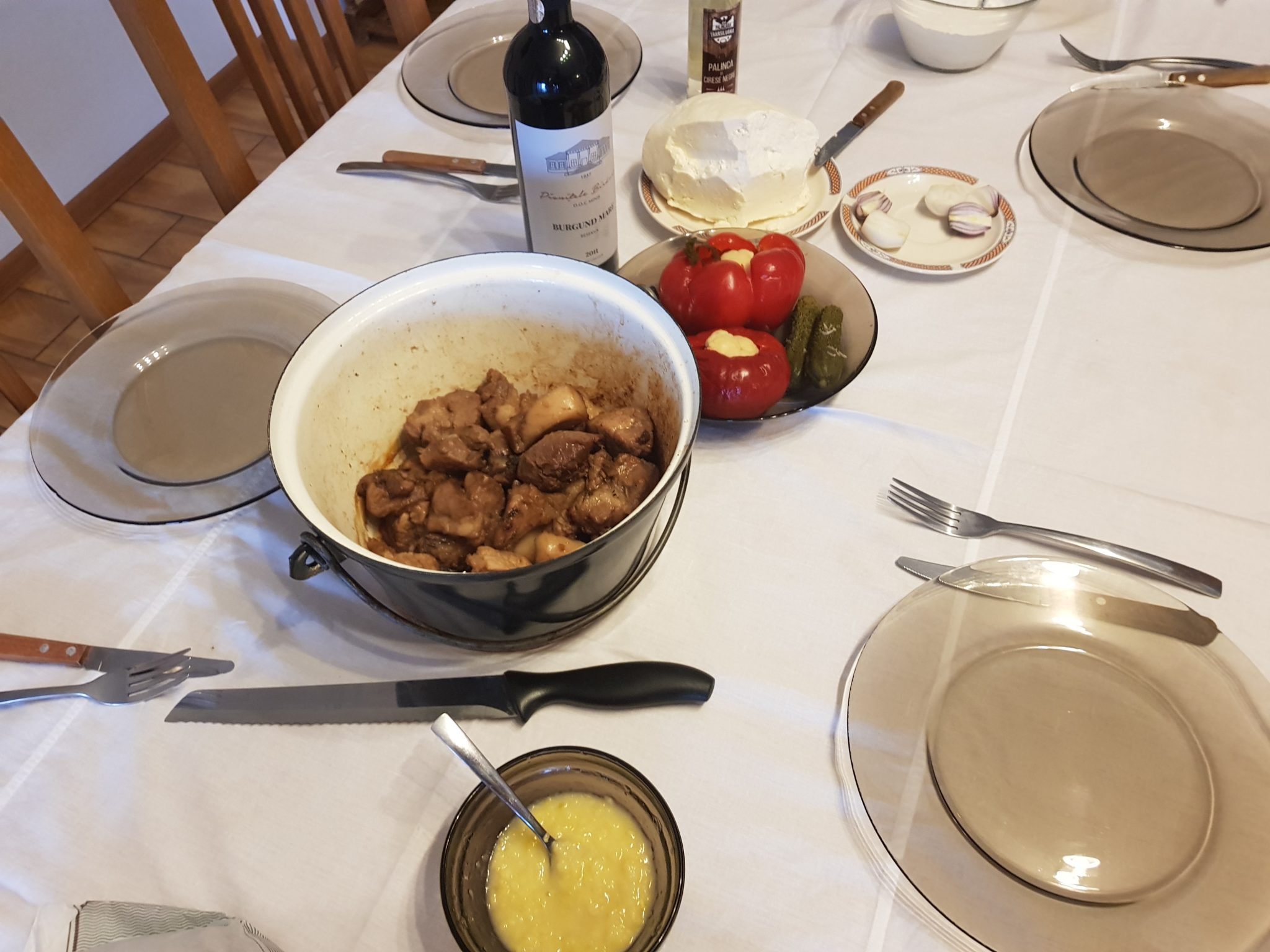 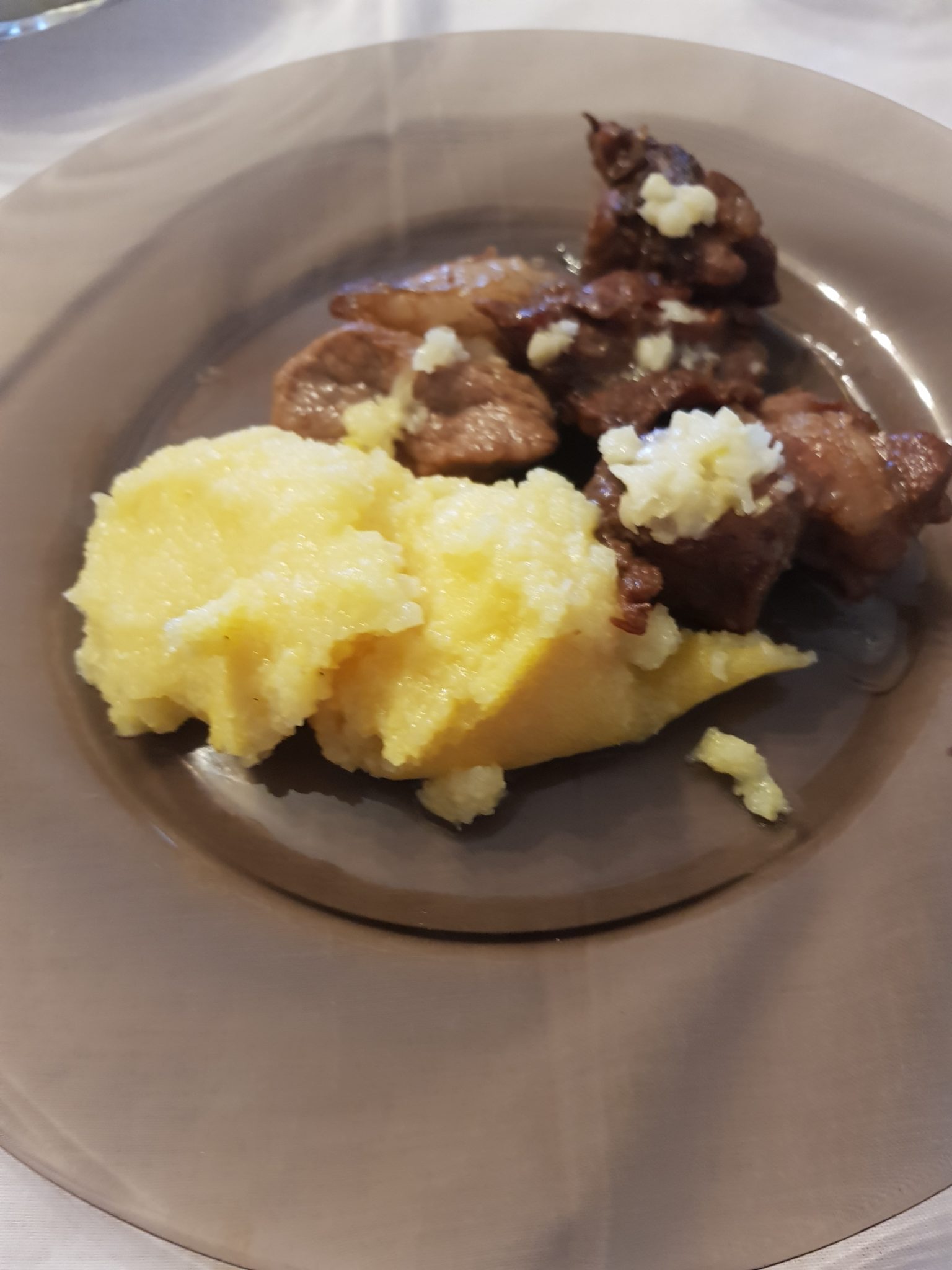 Well, good news, bad news on the L homefront. Good news: I got by the fancy chocolatier in town, so…