Now one can imagine my surprise to find out that this obviously indisputable assertion was indeed disputed (Well, the last bit anyway). A few Glibs made the well thought out rebuttal thusly- 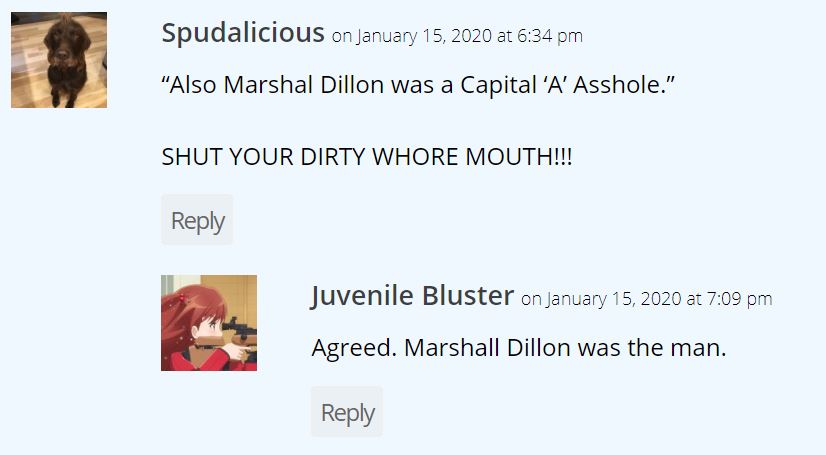 Faced with such compelling counter arguments I decided to give the Marshall another chance and vowed that the next time my insomnia and an episode of Gunsmoke coincided I would turn a fresh ear and reevaluate my opinion of the man. As luck would have it, just last night while tossing and turning and listening to Radio Classics I got my chance. First aired way back on September 20, 1952 and written by Les Crutchfield “Drop Dead” proved a perfect case study for the question at hand. But will it prove Marshal Dillon to be ‘The Man’ or an authoritative bully who bends the law to his own will?

(SPOILERS AHEAD!  Here’s a link to the show if you want to listen to it before reading my synopsis)

The story begins with a Mr. Jackson driving his cattle to Dodge City. A drought has fell upon the region and he is upset to find that Cottonwood Pond, apparently the only water source available, has been fenced off by Old Man Howard the rancher who owns the land. Old Man Howard wants what Mr Jackson believes to be an exorbitant price to water his cattle and a stand off ensues, one that could lead to big trouble if a resolution is not reached.

Meanwhile, Marshal Matt Dillon is hanging out with his buddy Doc whinging that it’s been ‘too quiet’ and that if the drought doesn’t break there will be trouble as everyone’s on edge. Doc who admits that he ‘Steals ’em blind’ when he gets patients, hopes maybe he will get a few fees out of any such trouble at least, which generates a chuckle out of Matt, ‘good old Doc, haha.’ Just then, Chester ass-kisses his way up and informs Matt of the impending fight at Cottonwood Pond and off they go.

On the way, we learn that Chester and Matt don’t much care for Old Man Howard. He’s a ‘skinflint’and no decent man would do what he’s doing, trying to squeeze two dollars where one should be sufficient. Once at the pond, Old Man Howard asserts his property rights and commands Matt to protect him from the trespassing cattle and cowboys. Matt begrudgingly admits that Howard is in the right and has the law on his side. Mr Jackson isn’t happy about it but concedes that Matt has a tough job and promises to give him until 9 pm to talk sense into Old Man Howard, but after that he’s taking his cattle to the pond, law or no law.

Matt and Chester return to town. Chester, who mentions that he thinks a storm is coming, goes off to try and round up deputies. Matt goes crying to Kitty at the Long Branch about how the damn law has tied his hands and he hates it, but he has to side with Old Man Howard. Chester can’t find anybody willing to help and Fenton, Old Man Howard’s foreman, comes by to see if Matt will deputize him and the other ranchers so they can fight off the cowboys should they trespass. This angers Matt and he orders Fenton to leave the Long Branch. Fenton refuses and Matt gets even angrier and more vocal shouting for Fenton to “Get out. Go on, get out! MOVE!!”

After Fenton leaves, Kitty comments that it’s too bad they don’t have a lawyer in Dodge who might find a way around the law for Matt. At first Matt scoffs at the idea of a lawyer -“Heaven forbid”-, but then remembers the law books left behind when some passing lawyer died while in town a while ago. He, Chester and Doc scour the books and find what amounts to old west eminent domain, complete with wordings such as ‘acute emergency’ and ‘general welfare’ and ‘public good.’

Thunder can be heard in the distance as Matt returns to Cottonwood Pond where he first meets Fenton, guarding the fence. Matt calls him a bushwhacker and says he usually greets bushwhackers with his six shooter. He then calls together Old Man Howard and Mr Jackson, pronounces himself the ‘Duly Constituted Authority’ and declares an ‘Acute State of Emergency” and takes the pond in the name of the US government and cedes watering rights to Mr Jackson. Then he gives Old Man Howard five minutes to make a deal with Mr. Jackson who was just told that he was getting the water for free.

Old Man Howard refuses to accept Matt’s authority so Matt deputizes Mr. Jackson’s men, cuts the fence and instigates a shootout between the two factions. Losing the battle, Old Man Howard’s men start a brush fire which gets out of control and threatens to burn down all of Dodge. Right when all hope is lost, the rain storm that Chester thought was on it’s way breaks.

Fenton, whose men have been shot and possibly killed,has lost his job because the fire did burn down Old Man Howard’s Place. He tries to ambush Matt and Chester, but Matt out guns him. Next Old Man Howard takes his shot at Matt and Chester. He has them dead to rights but is standing under a tree and is taken out by a lightning strike. Everyone else lives happily ever after.

I believe it’s pretty clear where Marshall Dillon falls on the Asshole-Hero spectrum; he’s fine with his friend Doc gouging people, not so much Old Man Howard. He scoffs at Lawyers and the way the law is confusingly written but then takes full advantage of that ambiguity. He menaces a private citizen and tosses him out of a public establishment just because he doesn’t like the guy. He later impugns the same guy who is simply doing his job. Matt then lets him know he’d rather just shoot him. He goes out of his way to avoid doing his duty when he doesn’t like it but jumps at the chance when his duties benefit Mr Jackson, not even waiting to see if the approaching storm will bring crisis ending rain or not.

Asshole with a capital A.

Lest one thinks I cherry picked an episode here you will see that this episode did indeed air on 1/19/2020 at 2:30 am, Also to show that I am accurate with my description of the show you can listen to it in it’s entirety here, it’s episode 18.  Lastly if one imagines this is just a one off story, ill representing the true character of Mr Dillon, the scriptwriter of this episode is credited with writing a total of 138 radio and television stories and scripts for Gunsmoke, I’d say he knows the score.

And lastly whether you accept my conclusions on Marshal Dillon or not (have at it in the comments [natch]) I think we can all agree that Chester is a sniveling toady with his head so far up “Mr Dillon Sir’s” ass that his feet can’t reach the ground.