The thirty-something range of rifle cartridges, like any other range, has a fair share of oddballs:  Small-company proprietary rounds, wildcats, old black-powder rounds that didn’t transition to smokeless, and so on.

So, in this last segment, let’s look at some of the more notable oddballs.

At the End of the Black-Powder Era…

Black powder rounds tended to use larger bullets launched at (by necessity) lower velocities than smokeless powder loads, so towards the end of the black-powder era there were a lot of thirty-something rounds floating around.

In the thirty-two range, in the 1880s the Stevens New Model Range Rifles Nos. 9 and 10 were available in the .32-35 Stevens & Maynard round, which was ballistically very similar to the old black powder loads for the .32-40 Ballard.  There was also a .32-40 Bullard (not to be confused with Ballard) that was brought out in 1887 for the Bullard lever gun, which didn’t survive into the twentieth century.

The late nineteenth century, up until the beginning of the Great War, was a time of great experimentation with rifles, rounds and the newfangled smokeless powders; even limited to thirty-something calibers, the space afforded to me here precludes describing them all.  But as the shooting community moved beyond the Great War years, the thirty-somethings would continue to proliferate, as we have seen; the oddballs did so no less than mainstream rounds.

In an earlier segment, we examined the gun-making career of the remarkable Mr. Charles Newton; one of his rounds was, like most of his work, well ahead of its time, and thus was doomed to obscurity.  The .35 Newton, first listed in the Newton catalog in 1915, was based on the .30 Newton case and was only ever available in Newton rifles. 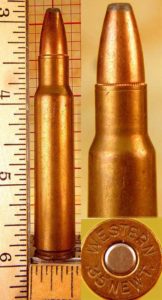 The big round punched out a 250-grain bullet at 2,800 fps, yielding hitting power in the same range as the .375 Holland & Holland Magnum with which it was a contemporary.  But while the H&H round was available in a variety of rifles, the Newton round was only available in Charles Newton’s rifles, which were fitted with narrow stocks bearing steel buttplates and excessive drop.  To call the .35 Newton rifles’ recoil “considerable” is reportedly a gross understatement.  I have never handled one myself but have heard that it was an extremely difficult rifle to shoot well because of the pronounced kick.

There was one other notable entry in the magnum world; in the 1930s, the folks at Griffin & Howe necked down the .375 H&H case to .35 caliber and called it the .350 Griffin & Howe Magnum, which in some circles was called the .350 Holland & Holland Magnum due to the H&H folks offering it as an option in their rifles.  Like the .375 H&H, the .350 G&H is a bit overpowered for most North American game, sending forth a 250-grain slug at almost 3,000 fps.  Add that to its being, well, obsolete, and it’s a round you won’t run across very often, although if you did find one, cases are readily enough made from .375 H&H brass.

Only one cartridge in today’s discussion ended up in the mainstream; it fits in the discussion of oddballs only because it was the only successful U.S. rifle round to fire a .348 bullet.

With a Model 71 Winchester chambered for the .348, American sportsmen had a solid, reliable lever gun capable of handling any game on the North American continent.  This wasn’t new; the 1886 and the later 1895 lever gun already chambered powerful rounds, including even the .30-06 in the case of the box magazine-fed 1895.  But the 1871 was popular enough that Browning made a limited run of reproductions in the late 1980s. 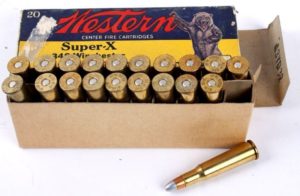 The .348 had one disadvantage:  In the shooting world between the world wars, when bolt guns were slowly taking over from lever guns as the American sportsman’s favorite, the rimmed .348 was strictly a lever gun round.  Most American bolt guns, based more-or-less on the 1898 Mauser, would not easily handle rimmed cases; so the otherwise excellent .348 Winchester languished, and after the Model 71 was discontinued in 1958, Winchester did not offer rifles for the round (the Browning replicas excepted), although they continued to sell loaded ammo for some years.

One wildcat round that saw some use in the twentieth century was an answer to the question “what do I do when my .30WCF (or .32 WS) rifle’s barrel is shot out?”  The answer was this:  Bore out and re-rifle the barrel to .35 caliber, neck up all your cases, and in so doing switch to the .35-30 wildcat.  This was in fact one of the first wildcat rounds, dating back to before the Great War, and is reasonably effective, although it is still within the .30WCF/.32WS range.  A similar round is the wildcat .357 Herrett, cases for which can be made from .30-30 brass.  This latter round has achieved some popularity in the Thompson-Center Contender line of hunting handguns and was offered as a standard chambering in Contender barrels starting in 1974.

American shooters love to experiment, and that trend hasn’t ended as we move into the twenty-first century; not by a long shot. 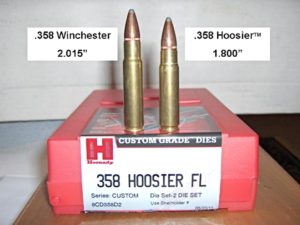 This led to a spate of wildcatting, particularly in Indiana, where necked cartridges were allowed.  Such oddities as the .358 BFG, .358 Gremlin, .35 Indiana, .35 SuperMann and .358 Hoosier all started showing up in the Indiana forests and fields, demonstrating once again the capacity of the American wildcatter to respond to almost any challenge.

The final entry, not really an oddball but instead just a very recent innovation, came out only last year, again in response to the liberalization of the use of rifles for deer hunting in several Midwestern states.  In 2019, Winchester developed an entirely new cartridge that was to meet several criteria:  It had to be a straight-wall case to meet the new 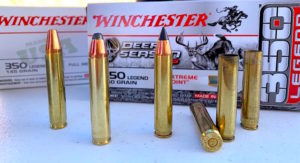 regulations in the aforementioned Midwestern states; it had to pack enough punch to easily take down big Midwestern whitetails, and it had to be adaptable to function in the wildly popular AR-15 platform rifles.  The result of this was the straight-case .350 Legend, a neat little round that punches out a 160-grain bullet at 2,600 fps.  While the round is made to be usable in the AR platform, it is also available in the Winchester XTR and Ruger Ranch and Scout bolt guns.  This round in a very light bolt gun would have been pure distilled purple poison on deer in the forested hills of Allamakee County where I hunted whitetails as a young fellow – and unlike the .30-30 I generally used, nowadays the .350 Legend would be legal for such purposes.

There are a host of rounds I haven’t mentioned; the JDJ and Dakota lines, to name a couple.  I’ll probably write up something in the future on those two proprietary lines, as the cartridges and the rifles that use them are interesting in their own rights.  In the meantime, if you’re looking for a game rifle for stuff bigger than deer, look at the mid-thirties!  They’re fun and useful.