Some of us live in apartments, some in smaller homes, some in HOAs that dictate our every move. The common denominator though is we all like to eat. We may have different preferences as to what we like but we believe our choices should be and are healthy. Some have a garden where they grow their own veggies, maybe even a fruit tree, depending on the size of available space. Some of the townies remember going out to Grandpa’s farm as a kid, either to work a little but always to enjoy the meals Grandma would make for us. We are a generation or two from the agrarian society that has made this country such a freedom loving powerhouse.

I’m one of those country boys that still has the cow manure between his toes.

My name, translated from Latvian, is Gardener. When it came time to retire one of the most important things I wanted was a space to have a garden and I got lucky. The not so lucky part was the soil (dirt we call it) is predominately sand, like the kind you find on a beach. The pine trees grow well here, gardens don’t, without a little or lot of TLC, the more the better.

My wife is a small farm village girl and lived where gardens grew year around so she knows and understands the importance of fresh from the garden produce. She has her own flower beds here around the house with the herbs and flowers she likes.

Because I am a notorious cheapskate I like to start my own plants. This time of the year I dig out all my last year’s seeds and test them for viability. I’ll take about 5-10 seeds of each variety and put them between wet newspaper, keep the papers damp until I see if the seeds are going to sprout. I’ve tested squash and watermelon seeds already, seeds that I saved from my own plants from last year. (They tested good.) I did cabbage and broccoli seed tests from store bought seeds that were dated 2016/17, they tested well. I’m testing about 8 varieties of pepper seeds now, some have sprouted, some haven’t but they can take 3 weeks or more for some varieties, I’ll keep testing. Those that don’t sprout I’ll throw away and not waste time next year. 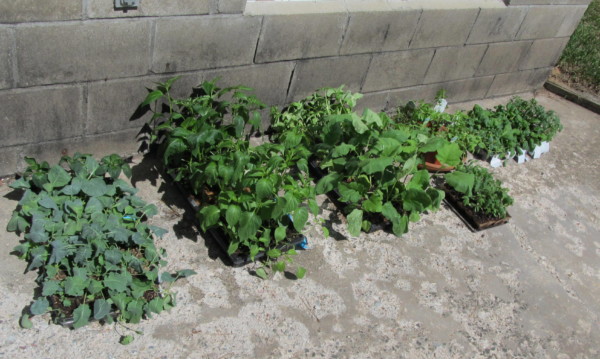 Then about the end of March I’ll set up my grow room, a big table, grow lights and in a warm area (next to a wood burning furnace). I’ll start pepper and eggplants first, ’cause they are slow starters and grow slowly. Then mid-April the cabbages and similar brassicas, including kale. About May 1st the tomatoes, nothing is better than a garden ripe tomato, the green house ones look great, no taste. I’ll start watermelon and cantaloupe plants about the same time. I’ll have about 250-300 baby plants growing inside. Towards the end of May I’ll harden them off, taking them out in the sun on the warm days, bring them in at night.

In the meantime I’ll till up the garden, it’s fairly easy because the soil is light but takes a few hours. Now it’s getting towards the first of June, I’ll already have planted the daikon radishes and the carrots. I’ll be looking at the moon phases, not for some mysterious revelation but if there is a full moon, a clear night in the first 10 days of June, a frost is possible so I’ll be watching weather forecasts and hoping for some warm nights in the first ½ of June. 2019 we had a devastating frost on June 13th, froze the tomatoes but fortunately I had mulched heavily and only the tops were froze and they regrew but 2 weeks later than I’d hoped but still not a loss. 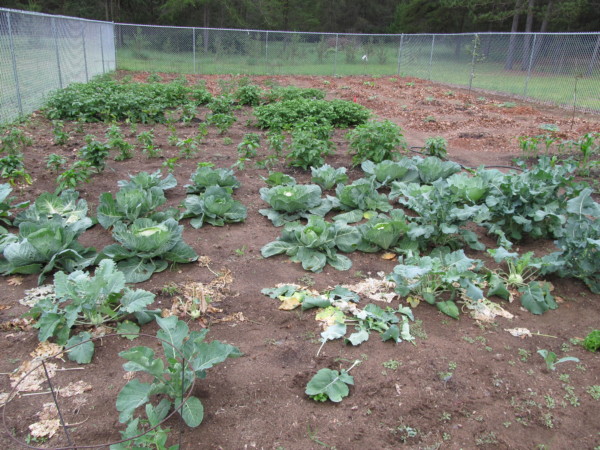 While I’m waiting for the weather to warm up I can plant the potatoes, since they’ll be underground if it gets chilly. Cabbages etc can go out ’cause they can tolerate a little cold weather. The frost danger being over I can plant the tomatoes, peppers, eggplant and melons. Corn can be planted after the ground has warmed up. At first everything needs to be watered if there is no rain. The soil dries out in a day so watering is imperative. Fortunately I put in a well nearby so I can irrigate with a garden hose.

I buy a truck load of black dirt, about 7 yards, and use that as an amendment mixing with the soil around the plants. I will toss a small handful of 10-10-10 commercial fertilizer with each plant, later I’ll re-fertilize again, about mid summer. The only chemicals I use is on the cabbage plants, they seem to get worms regardless. I might try wood ashes on the beets, they get some kind of bug in the beet. I love pickled beets but not fresh ones. 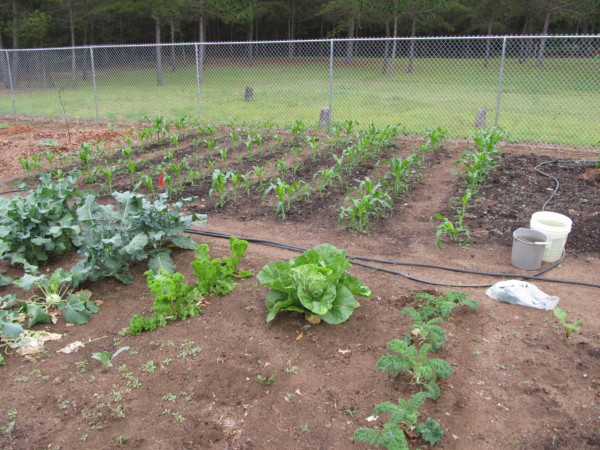 In a matter of a few weeks, 3-4, we’ll be eating green mustard, kale and radishes. My wife likes the green mustard in stir fry, it is really bitter but I eat it. Kale is fresh or stir fry, we like kale in a salad. Cucumbers grow prolifically and are eaten like a banana or in a salad or will end in jars of refrig pickles. 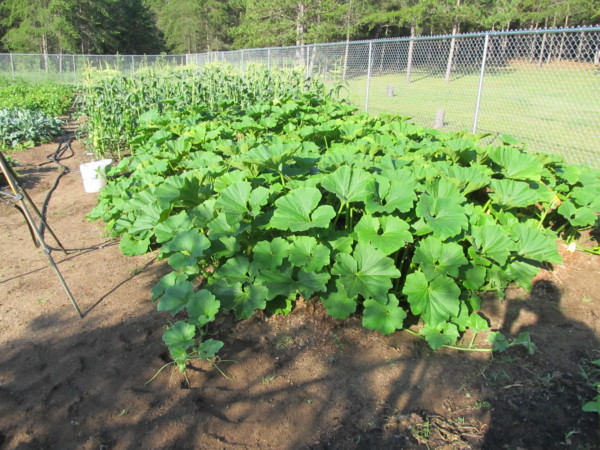 Then the good times, corn picked before the meal and eaten right away. Tomatoes, cukes and corn, X2 a day, as long as they are productive. Lots of stuff to give away. All this time the bees have been friendly and buzzing around the garden, enjoying themselves. Then I see a melon that I’ve been watching for two weeks and it’s ripe (I hope) and it’s not quite ready but a few days later they are ripe and I’m the proverbial hog in heaven. Eat the fresh produce until it freezes. The day before I believe it’s going to freeze I’ll pick all the melons, tomatoes, and cukes. After it freezes I’ll wait a few days ’til the potato and squash vines dry and then harvest the taters and squash. I’ll leave the cabbage until it gets really cold, pick them and wrap them in newspaper and store them in an extra refrig. This year we were still eating cabbage ’til mid January and I was getting a bit tired of coleslaw by then. 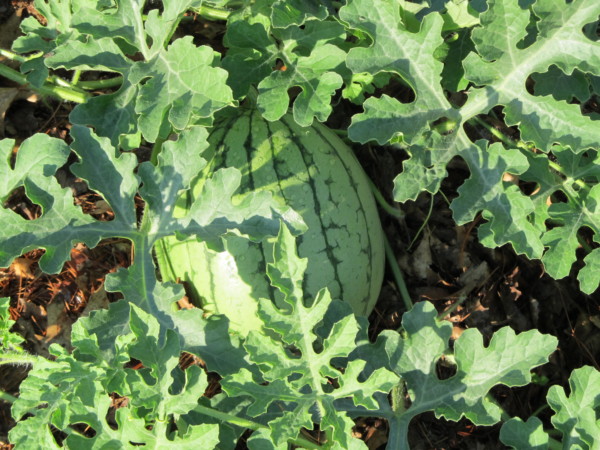 For me the garden provides therapy as well as food. The time spent out there is a bonus and doesn’t count against us. A few deer flies, sometimes mosquitoes and an occasional varmint. All the garden needs is sun, water, fertilizer and me. Every year I learn how to do something that works better than my old way.

If you’ve never had a garden and have the space, even a small one, a little creativity and you will amaze yourself, seeing what you can do, with a little help from nature.

I’m going to plant a couple apple trees in the garden, inside the fence. I may never get to eat one but one day maybe someone will say, “Sure glad that Old Guy planted these trees, the apples are good.” 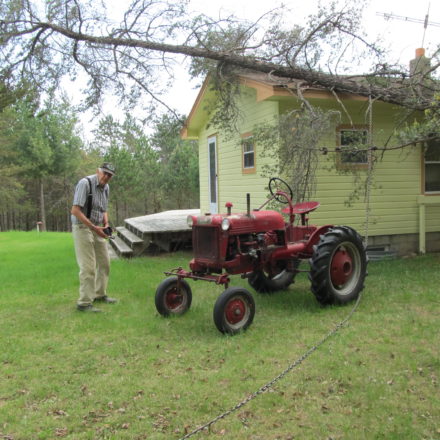