Continuing my deep dive into crap horror born of reading Paperbacks From Hell by Grady Hendrix, I read Night of the Crabs by Guy N. Smith. 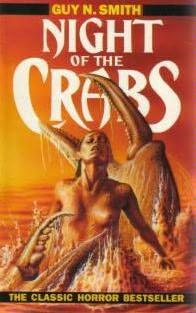 A 1976 entry into the “Attack of the Giant Whatevers” genre, the plot follows the plucky adventures of two loving newlyweds on the honeymoon in Wales who are immediately dragged to their watery doom and eaten. Inconvenienced, his uncle, Professor Cliff Davenport, swings into action to solve the disappearances. At his bed and breakfast, he meets the impossibly winsome divorcee, Pat Benson–intrepid, immediately loyal and sexually voracious, Pat insists on helping him solve the mystery of the missing newlyweds. (After they figure out it was giant crabs, the newlyweds are never mentioned again.)

After a sexually charged morning of looking at giant crab tracks and watching a hobo, the couple goes back to the beach later that night to try and see the giant crabs for themselves.

It was after eleven o’clock when they left Mrs Jones’s private hotel. The night was warm and the moon was just beginning to come up over the mountains, casting its silvery glow across the whole countryside.

Cliff Davenport had a sports jacket over his open-necked shirt and was wearing flannels and pumps. Pat Benson wore a polo-necked sweater and jeans. They did not take the car, preferring the lengthy walk to Shell Island through the moonlit countryside.

‘What a beautiful night,’ Pat remarked as they passed alongside the barbed-wire fence which enclosed War Department property. ‘If only we didn’t have to worry about giant crabs!’

A tawdry sex scene ensues while they wait for the crabs to appear.

Her fingers were active, though. Cliff felt that thrilling sensation of his zip being pulled down, her fingers groping inside the open vent and then the coolness of the night air on his warm moistness. He gasped with pleasure. Pat Benson certainly knew what she was doing!

Their lips met again, tongues probing and entwining. Both of them were experiencing the awakening of something which had lain dormant in them for so long. Rapidly they were getting out of control. Nothing else mattered … not even the giant crabs!

Finally building to the crab-haunted climax:

Cliff rolled in between her open legs. She still had a grip on his hardness and now she was guiding it down where she wanted it, bathing it first in her warm river of desire and then sliding it down further until it disappeared inch by inch into her.

After that nothing else mattered. Their bodies bucked and heaved as they murmured sweet nothings in each other’s ear before finally convulsing in a violent eruption that left them quivering and still yearning for each other.

Reluctantly they parted and adjusted their clothing. Pat, her hair awry and her cheeks flushed, looked more beautiful to Cliff than ever before.

‘I’m more than glad I let you come with me tonight,’ he whispered as he zipped himself up again. I’m afraid, though, that we must still keep an eye open for those crabs!’

In their post-coital glow, they watch the hobo from earlier get torn apart and eaten by King Crab!

King Crab! Nobody could have doubted the latest arrival’s right to rule. Half as big again as the rest of those nightmarish creatures, this one was the very personification of evil. It waddled slowly to the front of the others, its pincers waving menacingly as though defying any one of them to challenge its authority. Some of them moved back, huddling together.

After a few more gruesome murders and a couple of chapters convincing the British Army that the giant crab threat is real, the GIANT CRAB INVASION begins. A tank finally engages with King Crab! to pathetic result:

King Crab was thrown backwards, yet did not roll over. For a few seconds he just squatted, dazed, and then he advanced. His army, well in excess of a hundred crabs, followed him. The clicking was deafening, mind-searing.

The large claw waved and came to rest pointing directly at the tank. There was no mistaking his command.

‘Shut that hatch!’ the gunner yelled. They’re coming at us!’

Spoiler alert: The crab army picks up the tank and throws it in the ocean.

The rest of it gets even sillier, with underwater crab kingdoms and a child’s death by drinking weedkiller making crop-dusting the crabs with paraquat the resolution of the plot.

More disturbing than the novel is the fact that it spawned seven full-length sequels and four tie-in short stories.

Editor’s note: inspired by SF’s reading recommendations, JW sought sexual congress with giant crabs and has been in hospital ever since. We will be supplicating the only god JW knows, Dionysus, by drinking deeply of the vine and fucking goats at a vigil. Details forthcoming.

Flora J. Solomon – Along the Broken Bay. Another Amazon First Read (or whatever they call it now). Set primarily in Manila during the Japanese invasion inf WWII, this novel follows a pampered housewife separated from her husband as she attempts to survive and later assist the American and Filipino resistance. WWII is generally not my jam when it comes to historical eras, but Solomon uses it deftly as a canvas for her protagonist’s journey.

Bryan Caplan (Author), Zach Weinersmith (Illustrator) – Open Borders: The Science and Ethics of Immigration. I pre-ordered this when Zach Weinersmith flogged the project on his comic SMBC. I have warm-and-fuzzies for both Caplan and Weinersmith and thoroughly enjoyed both the content and the presentation. While I didn’t find every argument they made completely convincing, they certainly forced me to contend with some of the assumptions I had made on the issues in a new way. Highly recommend.

I read Compliance 101 by Debbie Troklus.  Yes, this is a book I read for work.  No, I didn’t actually pay for it.  I figured if I had a week with little to nothing to do, I may as well reacquaint myself with the material. 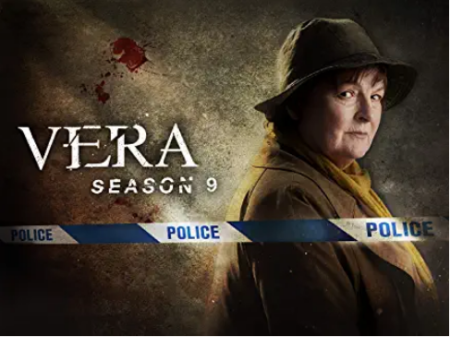 Escapism, thy name is SP.

I’ve once again been staying up just slightly beyond way too late reading mystery novels. (I had been working/studying until I dropped every night. Not sustainable.)  I’m currently working my way through the Vera Stanhope series by Ann Cleeves. The series was adapted for a British TV series, and I’ve watched a couple episodes, but they are necessarily condensed and changed in many ways. The books are more satisfying, if slower-paced.

I’m enjoying the novels, and it’s caused me to look up information about Northumberland, yet another area of England with which I wasn’t very familiar. Judging by the waiting lists for the eBooks and audio versions at my public library, I’m not the only one who likes them.

This site. Buy which I mean, the actual articles. Anyway, the articles SugarFree writes. Most of them. OK, many of them. And some of the others too. When I have time. Which is almost never.

The Last P.I. series by Richard Bowker.  A trilogy set in Boston about 20 years after the US was in a nuclear war.  Wally Sands grew up after the war and is fascinated by old, noir P.I. novels and so decides to become one.  Excellent world building that avoids the usual cliche of total government collapse which would not happen in my opinion.

The series reminds me a little of Ben H. Winters’ The Last Policeman  trilogy.  The day Hank Palace was graduated from the police academy, it was announced that an asteroid would hit the earth.  What would you do if you knew the date the world would end?  This series tries to answer that using Hank’s job as a policemen as a foil.  Good pre-apocalyptic world building and an enjoyable mystery.