Who uses a dedicated camera device anymore, I mean really? Digital camera sales have dropped eighty-seven percent since 2010. And the reason for that is that smartphone cameras take a damn good picture. But there is one thing that no camera can do for you, and that’s composition. Follow these easy hints and you’ll be taking better pictures in no time. All the photos for this article were taken with the camera on the author’s Android phone, and all the post-production processing (except anonymizing faces with the NPC sticker) was done using tools (crop, adjust) available in-camera on my phone.

This man has a lamp coming out of his head.

Our attention is quickly drawn away from the subject of the photograph to the coat rack in the background.

When you take a photograph you tend to focus on your subject, and that’s a good thing. But you can take much better photos with little effort and no special equipment if you train yourself to look at the background before you take your picture. When taking photos of persons and things familiar to you, your mind tends to ignore stuff that’s just part of your subject’s natural habitat — all good. But others, who know the subject and setting less well, will quickly be distracted by the background elements of the photograph.

The second photo is a little more difficult to fix. It’s a small room full of room stuff so you have limited options. We ask the subject to move to a different seat on the couch so we can get a shot with only empty wall in the background, then we crop the photo very severely (to the green rectangle) to yield a tight head shot showing only the subject’s head and shoulders, and the empty wall behind him. That yields a photograph suitable for a personal profile, or an author photo for a publication.

The kitchen counter is the natural place to take this photo of a beer bottle for a product review. But the counter in the photo below is a virtual minefield of distractions with the plethora of kitchen counter items behind the beer bottle. Not to mention the washout in the upper right corner from the under-counter light and the reflections from various bright and shiny objects.

Crop to the green rectangle to eliminate the most distractions possible. But the best fix for this photo is re-posing the beer bottle.

Solution: Move the bucket of kitchen tools and pose the beer bottle in the corner on a silicone potholder. Schwanky.

The train layout below is also a challenge to photograph.

There’s a train in there somewhere, but the story this photo tells is of a room with blue walls and white trim which happens to have a train layout in it.

Cropping and adjusting the photo does a better job of showing the train, but it’s still obvious that it’s a train layout in someone’s house.

The hobbyist sees only his pretty John Deere flatcar with the removable tractors. The uninvested viewer sees the warning “Caution: Electrically Operated Product…” on the train transformer.

Solution: Move the train to a different part of the layout where there is no distracting background.

For a brief moment you suspend disbelief and it looks like a real train because there are no visual clues to scale.

Let’s say we want to take a photograph of this logo mug. What do we do?

We grab a common household object, a towel, and turn the chair from a negative to a plus! Towels, plain dark t-shirts, and pillowcases all make good improvised backgrounds. Chairs make good micro-studios for small object photography, as well as background holders for when you need to position a backdrop behind a larger object or part thereof.

And we crop to the green lines yielding a nicely composed photo that tells the story of a mug.

Take advantage of the Crop and Adjust tools on your smartphone. Auto-adjust yields a sharper and more colorful photograph than the original, and you can always save both versions if you want to re-do the original later. Always overshoot — take 2-3 shots of each pose using slightly different angles. You can improve focus in low light by using a tripod, bracing yourself when shooting, or by propping the camera up and using the self-timer feature. 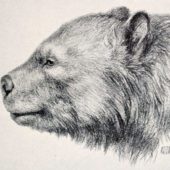