It occurred to me that all of my fellow Glibs could use some thoughts that were less dire than the constant media onslaught of the Kung Flu.  As I was musing, I remembered something that happened to me some years ago, and which prompted a very rough draft of an article at that time.  I dragged it out, completed it, polished it up some, and here it is:  Enjoy. 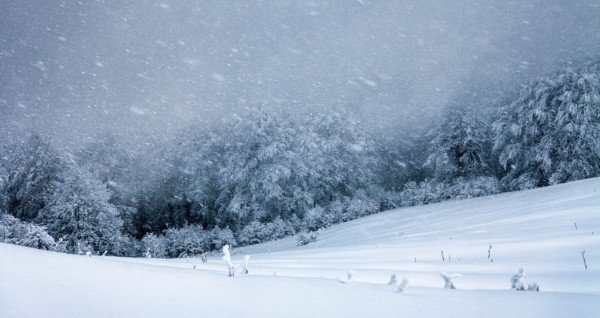 November almost always brings snow to the Colorado high country.  This day it brought wet snow, almost a heavy, wet, snow-rain that soaked through my sweatshirts, through my heavy wool pants, and made moving through the cedars a truly miserable experience.

But moving through the cedars I was, with a cow elk tag in my pocket, a rifle in my hands, and a purpose – to fill my freezer with elk steaks.

About ten o’clock in the morning the wind picked up, from a gale to a hurricane.  Since I was hunting into the wind, like any good, savvy pursuer of hoofed game, the ice-cold snow-rain was now blasting me in the face.  Every step sent a cascade of wet, sticky snow down on me from the branches of the cedars.

I rounded a small bend on the sort-of trail and there in front of me was a larger than normal cedar.  Overhanging branches and dense needles had left an almost dry, sheltered spot about four feet wide under the limbs.  Enough is enough, I told myself, and crawled into the shelter to wait out the worst of the storm.  Any elk in the area were no doubt doing the same thing.

The ground wasn’t too wet to sit on, especially since I was soaked through anyway.  I sat down and started to shiver myself back to some semblance of warmth.  It was a few minutes before I noticed that I had company in the shelter of the cedar. 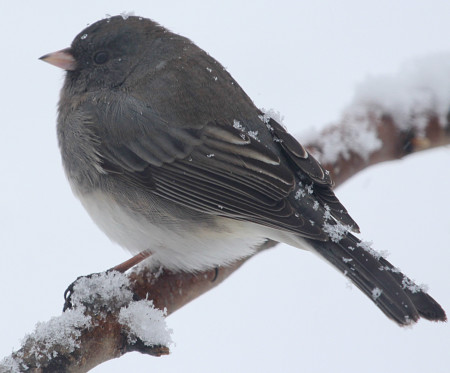 Dark-eyed juncos are bright, cheery little birds, a little smaller than a sparrow, mostly gray with a splash of white on either side of the tail.  Bright, charming mites, they add a note of cheer to tree-lines, flitting from tree to tree and punctuating the day with sparks of sound.

This junco wasn’t bouncing from tree to tree in search of seeds or insects.  He was interested in the same thing I was – shelter from the howling wind and wet.  As I sat down, he regarded me philosophically for a moment, and then went back to his half-doze, inside a coat of feathers puffed out against the cold.

We made an odd pair, the two of us sharing the shelter of a cedar.

He seemed to understand that I was no threat to him, even though I was a member of a species dangerous to many larger and more formidable animals than he: Man, a terminal predator, equipped with binoculars, compass and maps, knife, and a modern rifle capable of reaching three hundred yards to kill an 800-pound elk.  The junco was an ounce, perhaps, of fluff, feathers, muscle and bone.  And yet as I sat watching the junco doze, it struck me that perhaps my vaunted human “superiority” wasn’t all it seemed.

Think about that for a moment.  For all humanity’s vaunted technology, for all my polypropylene long johns, wool clothing, Gore-tex boots, and all my modern equipment to aid me in my hiking and hunting, this bird – this tiny bird – was better suited to survival in this storm than I.  He had no equipment, no tools for survival, just his wits, his instincts, and his feathers ruffled up against the cold.

While I was thinking about that, a gust of wind shook the tree, rattling all the branches.  A few plops of wet snow sifted down through the branches.  The junco opened his eyes, tilted his head to look up.  A blink, and he resumed his dozing.

We weren’t so far apart at that moment, he and I.  At least my wool outerwear had that wonderful, almost-magical property that only wool has, to stay warm after being soaked.  As I sat there, reasonably comfortable on a soft mat of needles, I almost felt like dozing myself.  I fought off the urge – dozing can be a dangerous thing for a displaced, hairless tropical ape on a frigid, wet Colorado mountainside in November, no matter how well equipped.  So, I distracted myself by thinking about how the junco and I came to be there on that frigid, wet mountainside that November day.

The junco’s parents were juncos.  Their parents were juncos.  Go back a few thousand years, and the bird’s ancestors were birds, but not juncos – perhaps a small bird of similar size and habits, maybe a sort of proto-junco.  Go back a hundred million years, and the proto-junco’s ancestors were some primitive bird, with a long bony tail and scaly jaws filled with teeth.  A few million years earlier, and the junco’s ancestors were likely some small, arboreal theropod dinosaurs.  Maybe another hundred million years before that, and the ancestor was a basal reptile, a four-legged, sprawling creature that spawned maybe a million, maybe a billion species. 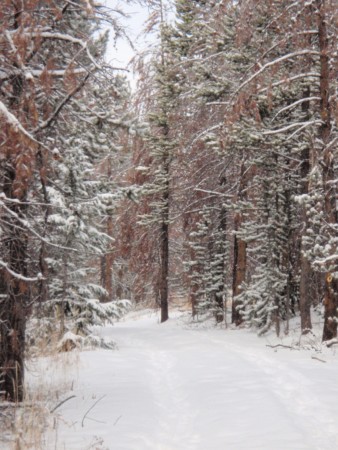 My own parents were human beings.  Their parents were human beings.  A few hundred thousand years ago, our ancestors were human, but they were not quite like we modern humans – their brains were smaller, their bones heavier, their speech and technology rudimentary.  Go back a hundred million years, and our ancestors were tiny, furry scurriers on the forest floor, burrowing into the soil or climbing into the trees to escape being crushed by the unimaginably huge monsters that ruled their world.  A few million years before that, and our ancestors were squat, odd-looking reptiles with a few new physical innovations – differentiated teeth, a new instinct for parental care for the young.  Maybe another hundred million years before that, and the ancestor was, again, a basal reptile, perhaps that same four-legged, sprawling creature.

And after those hundreds of millions of years, after that unimaginable stretch of what geologists and paleontologists call “deep time,” my brother the junco and I were brought together again to share the shelter of a cedar tree in a storm.

Of course, my tiny brother can only count on a few years of life, three or four perhaps, as opposed to the eighty or ninety I can expect to live.  But what of that?  His metabolism, running at a screaming, inconceivable pace compared to mine, balances that difference in many ways.  Could it be that his perception of a lifespan in fact differed little from mine?

The tiny black eyes and expressionless face of the tiny bird offered no clues.

In the end, all my philosophical musings mattered little in the larger scheme of things.  The wet snow tapered off to the occasional spit and the wind died down, and as the sky brightened slightly my brother the junco opened his eyes.  He ruffled his feathers and, ignoring me, peeped contentedly once and flitted off to go about his business of survival.  And I picked up my daypack, shouldered my rifle, and prepared to go about my own business of seeking the elk.

Now, as I write these words, I’m seated in a comfortable chair in a warm house, drink at my elbow, with music playing.  And yet I can’t help thinking of my brother the junco, somewhere out there on the dark mountain, fluffed out against the cold on his roost, maybe even in that same cedar.

He doesn’t and can’t understand the bond we share.