Emissary of Cospaia (EoC) and I went to Concord, NH today for the Rally to Reopen NH.  It was held in front of the State House.  Being Saturday, the State House was empty.

I figured the rally would not be big.

Chris Sununu seems to be a popular governor.  He is in his second of two terms.  Each term in New Hampshire is two years.  He is running for a third term.  He currently has only one primary challenger.  The gubernatorial primary is in September.  My impression from reading news, talking with coworkers, and posts on the NH subreddit is that many people in New Hampshire think Sununu is doing a good job.  There is a small minority that thinks he did not crack down hard enough, in other words, he should have been more like Gov. Whitmer of Michigan.  There is also a small minority that think he has cracked down too much.  I looked at the facebook event for the rally and the facebook page for the group behind the rally, and comments ran about 50/50.  Half supported the rally and half opposed it.

Combine the above with the snow, rain, and cold weather, and I expected no more than 100 people. 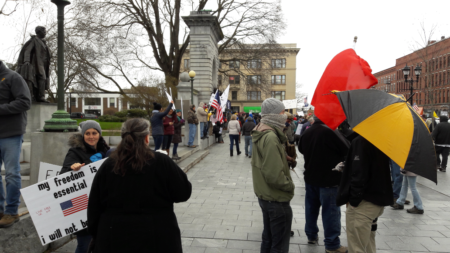 I wore a bandanna over my face not because of any concerns about Lil Rona (AKA SARS-CoV-2) but because of some concerns that I won’t go into in public. 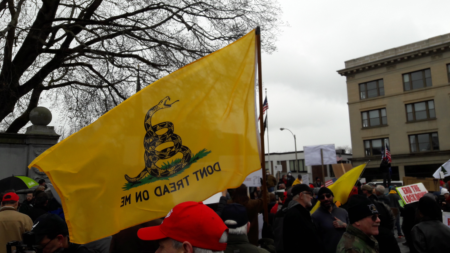 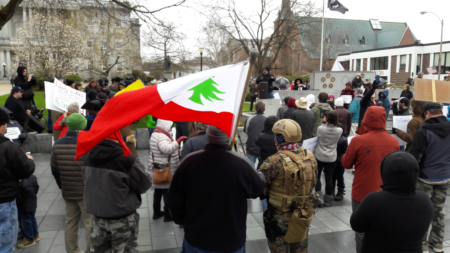 For signs, I saw many “Fire Fauci” signs.  I saw a “CDC Lies” sign.  There were several signs concerning “all jobs are essential” and “my freedom is essential”. 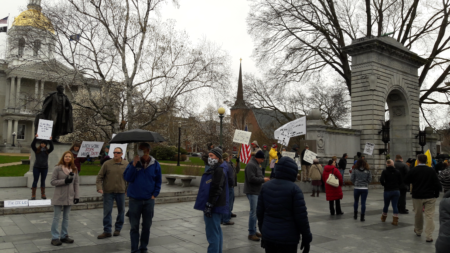 EoC and I wandered around and found an area where we could listen to the speakers. 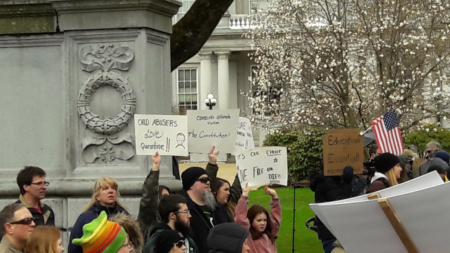 I zoomed in on a few signs from our vantage point.

I think about a third of the attendees wore masks.  No one kept Leper Length from each other.  We saw no uniformed police officers during our time at the rally.  EoC and I estimated the crowd of people at its peak to be between 200 and 300 people.  While we listened to the speakers, we noted the crowd died down.

Panorama of the crowd

I think the number of cars built up during the time we listened to the speakers.  There were never enough cars for gridlock.

One last observation before I go into the speakers.  We noticed some open carry of rifles.  I saw a M1A.  I first thought it was a M14.  When I got a better look I saw it had no selector.  There were several AR variants carried.  There were a few pistols openly carried.  I had a pistol concealed on my person. 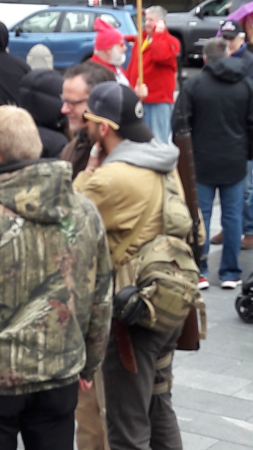 Blurry picture of the guy with the M1A 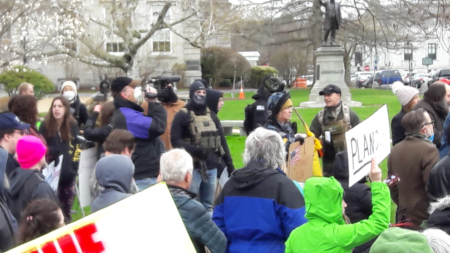 Blurry picture of a guy with a AR-15

My observations of the speakers are from my memory and notes.  Except for one person, I did not get their names.

The first speaker we heard is Nobody. 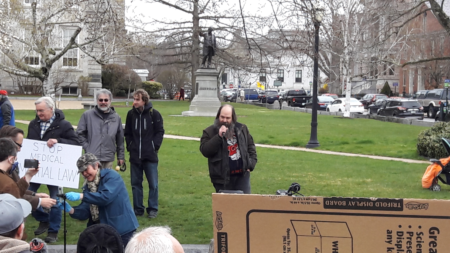 He is Chris Sununu’s only declared Republican primary challenger.  During his speech he mentioned something about another rally on the 20th.  I see no information about that rally on Nobody’s campaign webpage or on the Reopen NH web page.  If that rally happens, EoC and I plan to go. 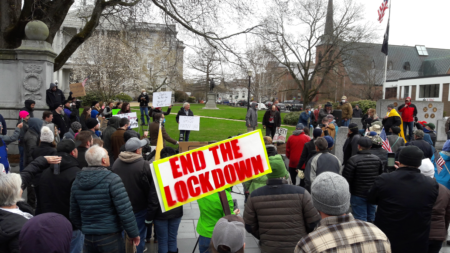 More of Nobody speaking

The next speaker was a woman.  I think she is a candidate for state office but I could not hear clearly.  What I could hear is that according to her, New Hampshire now has 124,000 unemployed people thanks to Governor Sununu’s actions.

A nurse spoke next.  She talked about how the WHO, CDC, and NYC health department have been pumping up numbers.  “If the person tests positive for the virus, it’s a COVID-19 death.”

The next speaker was a bit surprising.  A public school teacher from Manchester.  She talked about how the kids aren’t learning and how the distance learning program isn’t working all that well.  She also mentioned that her school district is getting ready to do this next year.  I think that could be for reasons other than a planned shutdown of the state like what is going on now.  The NH Education Commissioner has a long history of pushing educational reform in the state and it wouldn’t surprise me if he is using this situation to push for more distance learning as a permanent thing.

Then the lawyer that brought an early, failed suit against Governor Sununu’s orders got up to speak.  He mentioned that when the rally started, there were signs around the State House stating that gathering in groups larger than 10 was a misdemeanor.  He said we are all ignoring the signs.  We have the right to protest.  He offered to represent anyone arrested at the rally for free.  He commented about the lack of police presence.

I started to zone out during the last speaker we listened to.  However, I remember at the end that he implored everyone in the crowd to remind elected and appointed government officials that they “work for us!” 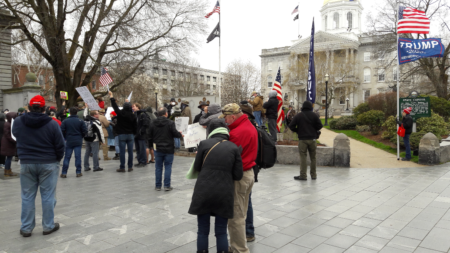 On the way out

At about 1:15 PM, EoC and I walked away from the speaker area and made a circuit of the State House.  We found evidence of the signs the lawyer talked about.  They had all been ripped down or otherwise damaged. 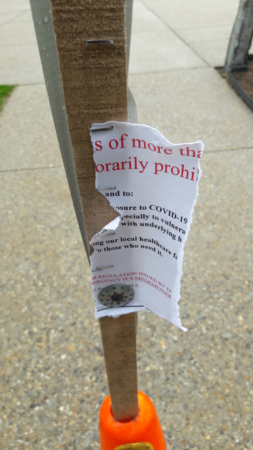 Unfortunately, I did not have my phone ready to take the picture of the best vehicle of the rally.  A guy covered a plow truck in signs and had flags flying from the truck’s bed.  It was pretty impressive and I’m kicking myself for not having my phone ready to get a picture of it.

It was a good little rally.  I have not checked any New Hampshire news outlets to see if there was any coverage of it, though I see Lemon Grenade found this story which has some pictures, some video, and fills in a few things where my memory and notes failed me.  Unfortunately, I think the rally was too small to matter.  On the other hand, it is good to see like-minded folks making noise. 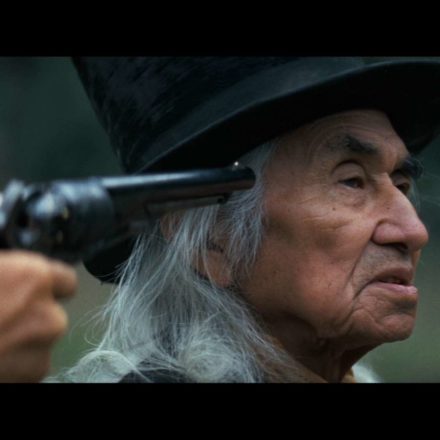