A Ranking of Ryes… With a Ringer! 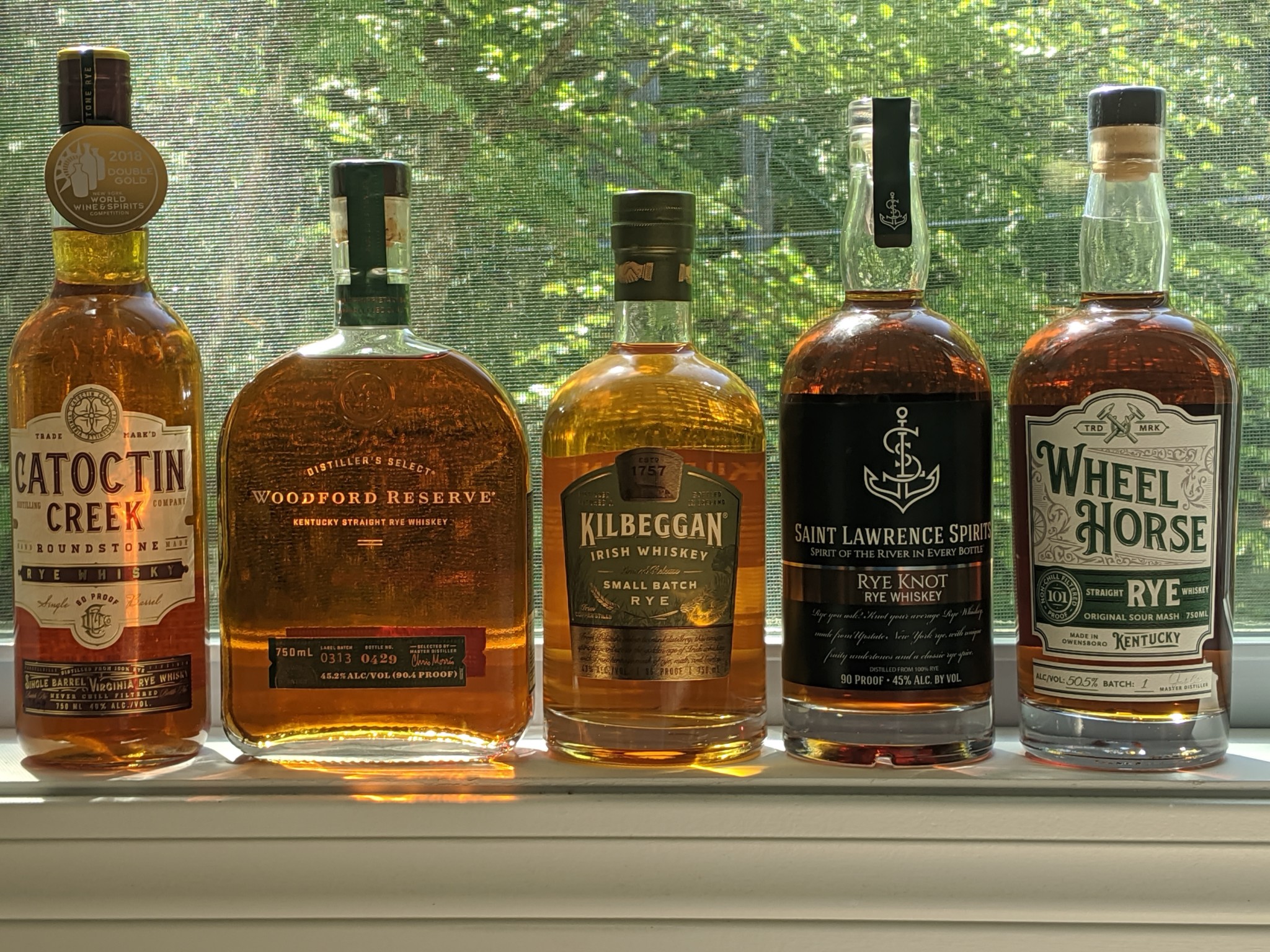 Well, my local liquor store doesn’t carry Dickel’s rye, just their bourbon.  Fortunately, there was something new there that fit the criteria for inclusion… and then there was a fifth that I wasn’t even sure belonged in the tastings, but in the spirit of ecumenicalism I added a fifth slot for tonight.

The condition for tonight’s tasting are similar to the previous ones.  72 degrees room temperature, so a bit warmer than the past ones.  Distilled water for opening overproof offerings, 70% Lindt chocolate.  I’m a bit lacking on neutrals, with just some meh English muffins and crackers available if I need to reset the palate.  Johnnie Walker Black for a calibration check.  Tonight’s cheeses are a good 3 year old Sconnie cheddar and a ripened double-rind from Lee Hennesy, who has mutual interests with me of cheese, open-mined women, and Subarus. 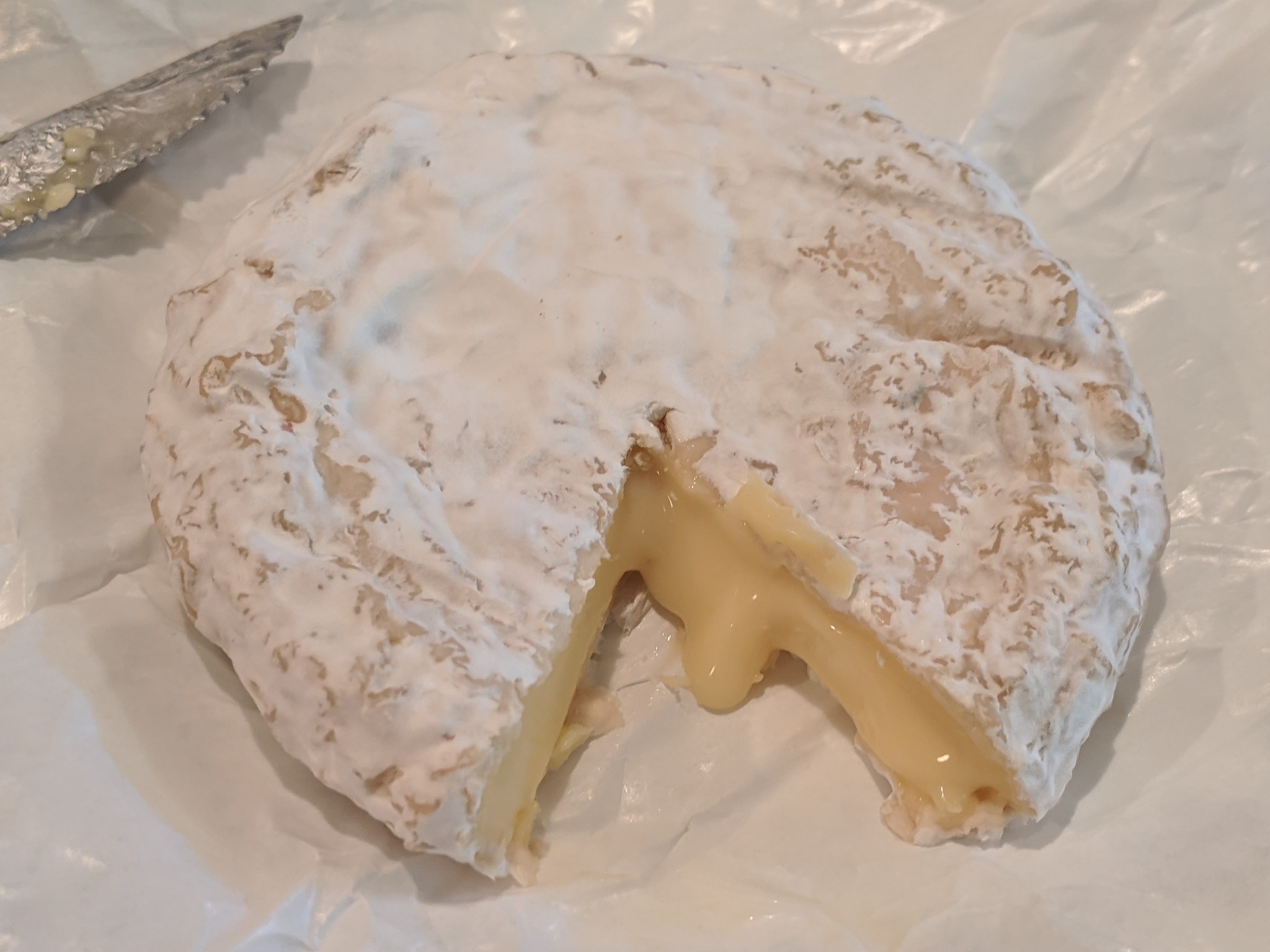 Woodford Reserve “Distiller’s Select” – A little harsh on the nose.  Enough so that I set the glass down and sniffed my hands to make sure I didn’t have some sort of cleaning solvent on them from earlier.  I don’t.  First sip is very sweet.  There’s an initial spice hit, but then it fades (or is drowned out) by the sugar.  There’s not a whole lot of wood flavor here, and the lack of charred taste coupled with the rather dark color makes me wonder if this has had caramel color added.  It’s very drinkable, and I like it, but I can’t say it’s a “good” whiskey.  It’s unsophisticated and I think this was pushing the limit of the prices I was willing to pay for this series.  However, it is tasty, and something to introduce your non-whiskey drinking friends to.

Catoctin Creek “Roundstone” – Double Gold Medal New York World Wine and Spirits Competition.  A blurb praising it from… Better Homes and Gardens?  Seriously?  That’s still around and they review booze?  You learn something new every day.  Distilled form 100% rye, never chill filtered.  Wait, I thought chill filtered was a good thing?  Don’t I have some bottles where they brag about it being chill filtered?  *checks Scotch cabinet*  Nope, I was wrong, they have “non-chill filtered” on the labels.  Ok then.  Well, this is interesting.  Good lord, there is all sorts of stuff coming up into the vapor phase.  I’m getting grapes and chocolate, liquorice, capsicums… this is as complicated as the Basil Hadyen’s Dark, and that got its complexity from having port added.  In the mouth, it’s surprisingly subtle.  More spice notes, exceptionally smooth, could use a bit more bite *checks label* ah, it’s only 80 proof.  This one is a winner.  Compared to the Woodford Reserve above, I would consider this one to be much “better” if not as immediately accessible.  Though considering how smooth it is that might be a plus if introducing non-drinkers and it’s definitely more of a rye.  I had some of the cheese with this one and homergurglingnoises.gif

Wheel Horse – Kentucky Straight Rye Whiskey, bottled by Ocean State Distillers in Woonsocket RI.  Which I guess means there are tankers of this moving down the highway?  Or intermodals?  Probably not isotainers, I can’t imagine that the plastic liner would do good things for the taste.  101 proof.  I have to say, I generally prefer 100 proof whiskies since they typically have such different flavor profiles as you dilute them down that I can customize the drink to my mood.  Straight, it has the typically mild nose as the flavor compounds stay in solution.  What is in the scent is herbals — grass and melon.  Oh, that is fantastic.  I thought the Catoctin was going to run away with it tonight, but maybe not.  I might have to have a second round to decide.  Damn, I’ve emptied out so much of the glass it’s going to be hard to get it to exactly 80 proof, I’ll get a sharpie and a spoon.  Oh, this stuff opens up so nicely.  The scent now bears a much closer resemblance to the taste, and that taste is goooood.  Still with the melon, but with Concord grape, chalk… there’s a noticeable wood/char component here that honestly needs to be otherwise why TF are you aging in charred barrels?  Yeah, if I have any tongue left, I’m going to need a runoff, just as an excuse to drink more of these.

Saint Lawrence Spirits “Rye Knot” – New York makes some excellent beers.  And decent, drinkable, but in nobody’s top 100 list spirits.  At least not mine.  Let’s see if this does better.  Although, why would you spell out “Saint?”  The name barely fits on the label.  And “Spirit of the River on Every Bottle (R)?”  You got that registered?  WTF does that even mean?  When I think of the St. Lawrence river, I think of Montreal, wrought-iron bridges, and mayflies so thick they can bring down jets.  Distilled from 100% New York rye.  I haven’t seen any NY grain fields yet, but I’m OK with that since the type of land that lends itself to grain production is typically very boring.  I’m just vamping here to let my palate recover.  I don’t think I’ll be able to make it through all five in one go — having delicious 101 proof beverages can be a problem if you want to keep all your senses sharp.  OK, ready.  The JW black tastes like JW black.  And… flipping iodine?  Whyfore iodine?  Are you peat smoking your rye malt?  Is that what the spirit of the river is, pharmaceutical plant discharge?  Dude, I can smell band-aids with the glass sixteen inches away from my face.  Now, drinking it, that’s not bad at all.  At all.  Yeah, I’m going to have to stop here because the only tasting notes I’m coming up with are “tight” and “whiskey” and “put on the shelf and never open again because it’s good enough to offer to guests as something local but there are always going to be better options unless there’s a severe supply disruption.”

Ok, so tonight things are a little bit cooler (69 degrees) and there’s a little more sodium isn’t going to be quite identical (as a sip of the JWB confirms).  However, that just means I’ll need to do a runoff after I try…

Kilbeggan “Small Batch Rye”  An Irish rye?  Is that allowed?  And does the word “rye” even mean the same thing when applied to an Irish whiskey?  I am not a labelling guy, so I have no idea.  The bottle label doesn’t say exactly what the grain bill is on this either.  However, it was in the store, was under $40, so I’ll give it a shot (so to speak, I’ll actually be sipping, obviously).  If it turns out too dissimilar I can always disqualify it. Well, the nose is interesting,  Definitely pear, some… dandelion?  It does seem to anesthetize a bit quickly, so I’ll move on to the drinking.  Oh I like that.  Definitely on the lighter side, sharper than the other offerings, a bit ashy.  Less of the fruit flavors when drinking it, and definitely less sweet.  And honestly, not too far off from some of the other ryes I’ve tasted along the way.  I’ll allow it.

After drinking another portion of the two I was uncertain of, the winner for this round was:

I may have bias towards 100 proof whiskies.  Next time — the Final Round!