What Are We Reading for September 2020

I have read just absolute trash for most of the month. Also, Breath, which seems like absolute fiction, but also hits me like Gary Taubes or Michael Pollen as truish enough to be worth examining some of the science in more depth. I’m not ready to tape my mouth shut when I sleep, but I do try to breath through my nose more when awake. I find the stuff about dental collapse absolutely fascinating. On the one hand, it doesn’t seem possible that if we just breathed through our nose and chewed more we’d have fewer dental problems, but on the other hand, it is not the first time I have heard that through a semi-credible source. Also, I have also been reading Captain Underpants to my children. Because it is important they internalize the lesson that school is a prison and the administration IS out to get you, personally.

Captain Underpants. No, seriously.  Due to semi-homeschooling I was told to have my youngest read books with chapters.  This fits the bill and soon I won’t have to help him read anymore.  Which gives me more time for other pursuits.

They use a U to spell words like color, but there appears to be little else British about it.

Classic “drugs falling out of my ass” this month for me, since it’s a book that’s old hat from most of you and gets mentioned regularly. Many years ago, I bought, devoured, and thoroughly enjoyed the first edition of Thomas Sowell’s Basic Economics. I gave it away to someone I thought could profit from it. Many years and many editions later, this book has grown so much, I popped for the thirty clams to get the current edition. And it is not only broadened in scope, it’s a lot more detailed and less breezy than Edition Prime. And that means, holy shit, it’s a delight.

I’m reading the latest Scot Harvath installment from Brad Thor, book 19, Near Dark.  For some reason, this one hasn’t grabbed me the same way that some others have. It’s possible that this is because I’ve missed a few books here and there; even though I’ve acquired them they just haven’t made it to the top of my TBR pile. I don’t know. But, along with my usual skimming past the rah-rah government and law enforcement bits, I’m just feeling kind of meh about this one.

Maybe it’s because Brad is using the old “tortured and drinking too much to cope” cliche. That generally turns me off a protagonist. There are many other ways to deal with the vagaries of life, and it would be more interesting, perhaps, if those were explored instead.

I’m reading Backlash by Brad Thor. Backlash is the Scot Harvath installment right before SP’s current read Near Dark. So far my biggest issue with this book is that I don’t want to put it down and go to sleep. I meant to only read for 30 minutes last night. Three hours later I had to force myself to stop reading.

For Glibs unfamiliar with Scot Harvath, Harvath is a former SEAL who has a habit of foiling the bad guys’ plans. And — as I’ve learned in this book — Harvath has some pretty impressive survival skills which are being put to the test.

Backlash is a pretty quick read. I’ll probably finish it in the next day or two, and then I’m on to Near Dark.

I’ve also been skimming The Modern Herbal Dispensatory. My biggest takeaway from COVID so far is that I don’t want to be reliant on the system for things like food or medicine. I’ve been educating myself about how to use different medicinal herbs. This book has been quite informative and even goes so far as to talk about what preparation methods should be used for each part of the plant.

Among other things, I read two more overlooked horror novels from recommendations in Paperbacks From Hell by Grady Hendrix, both by Ken Greenhall: Elizabeth (1976) and Hell Hound (1977, variant title Baxter.)

They veer close to being the same story in many ways, alienated loners who don’t really understand the world and therefore feel free to manipulate or even destroy to get their way. And things go very, very wrong in so many delightful ways.

In Elizabeth, the character is a 14-year-old girl who believes herself possessed by an ancestor who was burned at the stake as a witch and speaks to her through mirrors. The plot and set-up are well-done but the star is the writing, all first-person by Elizabeth:

We pretended that our appetites could be satisfied with toast and cereal; that our knowledge of evil was limited to what we learned of it from our morning newspaper.

Hell Hound is the same conceit, but this time from the point-of-view view of a quite psychotic bull terrier who is unhappy to be the pet of a kindly old lady:

What are the possibilities of my strength? That is a thought I have never had before. What if some morning as the old woman stood at the head of the staircase she were suddenly to feel a weight thrusting against the back of her legs? What if she were to lunge forward, grasping at the air, striking her thin skull against the edge of a stair? What would become of me if she were found unmoving at the bottom of the stairway?

I am going to seek out his other novels; the narrative voice he writes in is so compelling. 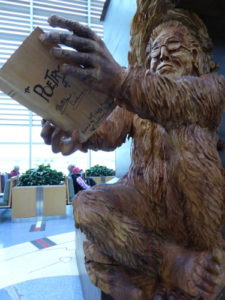 I need it like I need a hole in my leg.