“Now who the hell is that?“ Floyd asked himself. “Come in, god damn it,” he shouted.

“Who the hell do you think it would be, at coffee time?” Russ answered.

Russ helped himself to a cup of coffee, grabbed a doughnut and pulled up a chair by the stove. “I see you’re still buying day old doughnuts.”

“Oh, I didn’t say I didn’t like ’em, just an observation but hardly necessary, knowing you.”

“There’s nothing wrong with them, they’re still fresh. Besides, you’re the only one that ever comes anyway and why would I buy fresh ones for you, you might starting coming every day,” and both guys laughed.

“What brings you out this early, besides free doughnuts?”

“Oh, you know Chuck’s wife died a few months back. She had some property she’d inherited, about five acres, and in her will she wanted it to go to the church. So Chuck is donating it to the church but the preacher said the church could use the cash, rather than the property.”

“So, what’s that got to do with you or with me?” Floyd asked.

“Well, here’s the deal,” Russ said. “The preacher decided he’d raffle the property off quickly and to do that, he’d price the tickets cheap. I belong to that church, courtesy of my wife, so I got the call to organize the raffle, sell tickets and get the money to the church. The property is zoned residential and assessed at five grand for tax purposes. I had 1000 tickets printed and I’m selling the tickets at a buck a piece, already sold one to Gus, the mayor’s son. You want to buy some?”

Floyd quickly make some mental calculations. “Hmmm, five acres, a grand, assessed value at five grand, could be a good decision.” At that, he said, “Grab another doughnut, I’m gonna buy all the tickets, 999 of ’em, win the property and make a little money and solve the preacher’s problem.”

Russ took another doughnut, pondered a bit, “You know  there’s another ticket sold, Gus has a chance to win.”

Floyd looked over the top of his glasses at Russ. “Russ, you had the Covid-19?”

Russ stopped eating his doughnut, “Floyd, I’m not worried about getting it and if I do, statisically I have a 99.9 per cent chance of survival. C’mon man, you know that. We’re tough old buzzards, been sick a little but we ain’t gonna die, the numbers are in our favor.”

“So what you’re saying, Russ, is that I’m going to win that lottery.”

“Russ, I’m gonna pay you in cash for the tickets, if you think the preacher would be OK with that, I’ll give you ten Benjamins and I know the preacher will get it all.”

With that, Russ grabbed another doughnut on his way out the door, happy to have sold all the tickets so easily and a holler back to Floyd, “Next week get the fresh ones with the blueberry filling, Cheapskate,” and they both laughed.

The evening of the drawing came, everyone knew what had transpired, Russ stopped by Floyd’s.

Russ laughed, “It ain’t over ’til it’s over. There’s that one in a thousand chance that Gus is gonna win and you’re gonna look stupid.”

At the drawing the choir director’s 8 year old daughter was chosen to reach in the basket and pull out the winning ticket. She did that and handed the ticket to the preacher, who looked at it and gasped.

“The winner is,” and he looked around and walked away, trying to catch his breath. Russ picked up the ticket, the blood drained from his face and said quietly, “Gus won” and some in the crowd cheered, some laughed and few fell silent, ’cause someone was going to have to tell Floyd that he’d blown a $1000 on what he’d considered a sure thing.

Russ reluctantly decided he was the one to tell his old friend the news but he wasn’t happy to have to do it. He saw Floyd cutting the grass as he parked in the driveway. Floyd walked over to the car, smiling all the while. “Did you bring me the deed?” he asked Russ.

Floyd laughed. “C’mon in, we’ll have some coffee and a fresh blueberry filled doughnut, bought ’em just for you, kinda thought you might come by tonight and we could celebrate.”

As they were drinking the coffee there wasn’t much conversation, finally Russ had to ask, “Why are you so happy, you just lost a grand?”

Russ interrupted, “But Gus won, I saw the ticket and it was honestly pulled out in front of witnesses. Gus won.”

“Let me tell you a little story, Ol’ Bud. I ran into Gus the other day at the restaurant and we talked about different things and he was complaining about his lack of a chance to win the lottery, complaining how he was so unlucky and never won at the casino or playing poker with his friends and on and on.”

“I asked him if he’d like to win the lottery right now, of course he said yes. I told him I’d buy his breakfast and buy his ticket for $10 on the spot, he’d be making 1000% on his investment plus have his money without having to wait and watch me win the property.”

“As a gambler, Gus knew the odds were heavy in my favor and he sold me his ticket. As it turned out we both were winners, percentage wise he did better.”

“I’ve been talking to the real estate guy, he’s made me an offer on the property, plans to lot it off and re-sell the lots. Looks like everyone is gonna win. Chuck got rid of the property, the church made a quick $1000, Gus made 1000%, I’ll make a few bucks, the real estate guy will end up ahead and the town will have some folks moving on up to the east side.”

“Now Russ, after you finish that next doughnut you should see about getting a test, you’ve got a little cough, if there’s the slightest chance…” 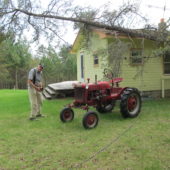