A trip to an Iconic skate spot

As usual, this seemingly mundane outing had an unusual twist. Seems like most of what I do goes just different enough to make me wonder what it is about me that attracts such things. At least this time, it was a happy outcome.

Some of you know that my kid has taken up skateboarding. I used to skate back in the seventies and was actually a decent skater. I’m not nearly as good as I was, but I still can skate at least somewhat, and not too badly for an old guy.

We decided to go check out Mt. Baldy full pipe. It’s been skated since back when I last skated. There’s photos of many great skaters riding it and it was on the cover of skateboarding magazine at one point back when. It’s a 16 foot full pipe, about 200 feet deep into a dam. There a 12 foot “gap” one must traverse to access the skateable portion. Usually there’s a plank one can walk across to get there ( thankfully, it was present for us.)

From where we parked, we had to hike about a quarter mile, half of which was a very steep incline with loose gravel and steep drop offs. My kid was quite scared and stopped often, needing coaxing to continue. The second half included slipping under a chainlink fence and walking up a long drainage ditch. As we approached, the sounds of skateboarding and loud banter were audible. Transition skating has a very distinctive sound. When you hear it, you know exactly what it is.

When we finally got there, there was a crowd of about 8 guys skating. Well, 4 of them were skating, the rest were spectating and filming/photographing. The pipe itself is filled with graffiti and seemingly much larger than it’s actual dimensions. It turned out these guys were pro skaters, and it was obvious by how good some of them were. I took a small vid of them skating.

In the vid, my kid is the, well, kid. The guy directly behind him, in the white shirt is a highly skilled pro and obviously the big shot in this crowd. The guy in the red shirt I believe is Salba, an old school legend. Not sure who the guy skating in this vid was. Anyway, I tried to lay low and let them get their footage before making any runs. Well, that and it’s mildly embarrassing to do my old guy skating alongside the pros. My kid took a few runs and I took one before they left. The big shot kid was grinding the flat edge from around 10:30-11:00 until 9:00 where it disappears. That seemed to be the money shot.

Anywhoo, my kids board is a bit chewed up from his abusive riding style and the pro crowd seemed to notice. Just before they left, the big shot took his trucks off ( the trucks and wheels are the most expensive parts) and gave his deck to my kid. It turns out it’s a signature deck built by his main sponsor. They told us we were ripping it and to keep skating ( narrator voice: we were not ripping it.) It was such a cool move, I was speechless. I didn’t even have to make my kid thank him as he did it on his own.

The pros have a whole different way of skating this place. They had a drop down chain ladder ( it’s visible in the first vid, on the left side of the wall) hooked directly above the pipe, on the pipe side of the gap. They pulled up all of their gear with a rope and waited for the truck to pick them up, right at the top. I can only assume they have some way to unlock one of the gates. I wondered what was up when they kept talking up top for about 15 minutes after they pulled the ladder up and then, a truck pulled up and whisked them away. Must be nice. We had to hike up a crazy steep hill with loose gravel and deep ruts. Luckily, it was right around 70 degrees out. However, I had to carry both boards, the backpack and the new deck because my kid crunched himself right at the end. Not easy, especially after skating for a couple of hours. I rested a few times. I am getting too old for this stuff.

So, I got a shitty pic of me floating around at about 4:30 ( in the pipe. Imagine a clock face as the pipe.) My kid was almost as good as the one pic I got. Honestly, I got a bit higher after a few runs, but nothing spectacular. I hit up near 3:30 and 8:30 at best. The hiking slowed me down a lot. The hike out was damn brutal!

When I got home, I looked up the kid. He’s a rising star who skates with Salba all the time. He started out by being brought to these skate spots by his dad. He actually sells a board (his sponsor does, anyway) with a pic of him and his dad standing in this exact pipe holding their boards. That kinda explained why he was so cool to us. Not to say he isn’t cool in general, but they seemed to be extra cool to us after learning that I am trying to expose him to skate spots and he’s been skating for just a few months. I felt really good about these guys after meeting them.

This vid is my kid’s third run. He’s not bad for eight years old.

This is the deck the skate star gave him. Rennie from “Blood Wizard” Skates.

And this is my fifth or sixth run. I did a lot better on some of the others but my kid is not very good at taking pics. Finally, I propped the camera against the plank and took a video and screenshotted this. It ain’t much, but hey, I’m 55! I skate a lot better at Pedlow, partly because you don’t have to hike there and partly because a pipe is non stop energy. There’s no flat spot on the bottom. You knees have to bend constantly. It’s tiring as hell. The best pic would have been my first run. I pushed a bit harder because the pros were all still there.

So, I hope you all find this at least somewhat interesting. It’s probably too local or something. For a minor libertarian angle, there’s no trespassing signs everywhere and you have to violate a few fences to get in there ( unless you’re a big shot). It’s all Corp of engineers land. It was an epic day for us and now my kid gets to tell his skate buddies ( most of whom I’ve never met) that he was given a deck by the skate pro. Once again, fate? Luck? whatever it is, transformed a normal experience into something memorable for both me and my kid. Most kids probably have to just ask that guy to sign their board at an event or something. Thank a Dog or whoever is in charge of this kind of thing. A good day. 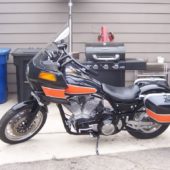