ZARDOZ SPEAKS TO YOU, HIS CHOSEN ONES. IT HAS BEEN SOME TIME SINCE ZARDOZ HAS APPEARED BEFORE YOU. PERHAPS THERE ARE NEW CHOSEN ONES THAT NEED INSTRUCTION…

FIRST POINT, THEN GUN IS GOOD – IT SHOOTS DEATH TO CLEANSE THE FILTH OF BRUTALS WHO PLAGUE THE EARTH. SECOND, THE PENIS IS EVIL. JUST WORK WITH ZARDOZ HERE… KEEPING THOSE POINTS IN MIND, ZARDOZ WILL PROVIDE YOU THE GIFT OF THE LINK. GO FORTH AND COMMENT! 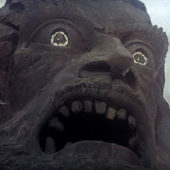