The Hat and The Hair Extended Universe: What Happened and The Shape of Things to Come 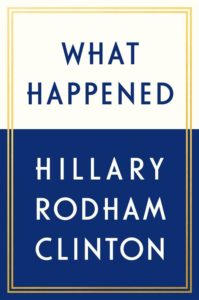 I am the most qualified person ever to run for President of the United States.

I happened to marry an adulterer who went on to become the 42nd President of the United States of America. I rode the resentment of his impeachment for lying about having sex with a 22-year-old fatty to become the first female Senator of a state where I had never made my home, a state with a corrupt political machine only rivaled by the cesspit known as Illinois. After walking away from the job of Senator, I ran a failed primary bid where I lost to a charismatic nobody with a penis and the ability to smile. After throwing a long public tantrum about that defeat, the nobody appointed me Secretary of State to appease the women in the party still angry about my primary loss. I was an undistinguished Secretary of State who used my office to line the pockets of my fake charitable foundation and hid my illegal activities by setting up a homebrew email server to evade Freedom of Information Act requests and Congressional oversight. I ran another bid for President with the direct collusion of the Democratic National Committee to suppress my primary opponents. With the full and overt support of a supposedly objective national news apparatus, I still lost to a national disgrace, a reality show host with all the natural charm of a used car salesman under indictment for fraud and his team of New York mobster hillbillies.

I am the most qualified person to ever run for President of the United States and somehow I still lost. This is what happened. 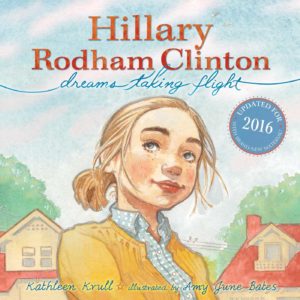 I had the same dream over and over again when I was a teenager. I am standing in a field, a wide open field. There were flowers everywhere and I reached down and touch them. I hear a far off sound, a low rumbling, a roar. I am confused, frightened. But then I see the missiles coming up out of the underground silos, like shoots growing from fertile soil in time-lapse. There are dozens of them. I imagine I can feel their flames against my face, hotter than the spring sun. The plumes of their engines fill the blue, blue sky where they stand on thick pillars of clouds. They are beautiful. I lift up out of the field and fly with them up and up and up, through the ever-thinning air and into the darkness of space. The missiles and I hang there, weightless, frozen for an eternal moment, then we slowly begin to fall back to the Earth. Faster and faster we fall, heat shimmering around us. The ground rushes toward us like a lover. And then blinding white light and a sound too loud to even be heard. When I can see again I am back in the field. A greasy black snow of human ash is falling. I hold out my tongue and catch a flake. It is delicious.

Bill vomited the first time I let him see it in the light. He was weak. I should have never trusted him. I barely have the dream any longer. When I do, Huma is there to hold me. I wish Huma would be in my dream but I know that is not what the dream is about. I can barely feel it when Huma touches the scar tissue. When she reads these words will be the first time I have told her that. Pleasure is not something I feel. Neither is pain. I feel nothing.

I wanted to be your President, America, so you could feel nothing too. 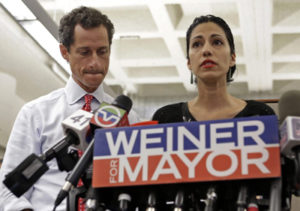 From the private journal of Huma A—–

Hillary is working on her book about the election again. She and her team work on it every night as we get closer to the publication deadline. She says she doesn’t want my help at this stage. At this stage. I ask her what she means by that and she just smiles.

She has asked me to write about the first time we met and our earliest times together. She says it is for the book but I know the misogynistic world we live in will never allow for our relationship to be public. Men and the women they have fooled can never accept two proud, strong women loving each other.

I love the woman who should have been the first woman President of the United States.

I love the most hated woman in America.

The first time we met. You know those moments in your life that you just know you are going to remember your whole life? It was like that. I saw her, our eyes met, and all I could think was “Wow, this is amazing.” She was so beautiful and she was so little. People say love at first sight is just chemicals in your brain and that it can’t be real. It is real. I touch her hand and I knew that I would be with her for the rest of my life. My secret place began to weep the tears of the djinn. It was the first time I knew I was in love with a woman. And that that woman was Hillary. I knew I would die for her if she asked, kill for her if she asked.

I fell out of love with Anthony in an instant. I miscarried our first child that night, shaking in the bathroom in our apartment and hoping the filth he had put in me would stay out forever. It was only because Hillary needed an apostate child to complete her Ascension that I ever consented to let the Jew touch me again.

She was so beautiful and she was so little. I hope she puts that in the book. That’s all I want anyone to know.

Senator Paul: Why was she even allowed to run in the Democratic primary again, Madam Chairperson?

DNC Chairperson Warren: We have an open primary process…

DNC Chairperson Warren: Senator Sanders was dead. Senator Booker, well, I think we all know why he couldn’t run. And she was the most qualified person ever to run…

Senator Paul: She was a 74-year-old two-time loser under indictment over her charitable foundation. She had a husband under a similar indictment who died under very questionable circumstances. Her daughter had fled the country over the activities of that same foundation. Was this really the best person your party could offer the country? 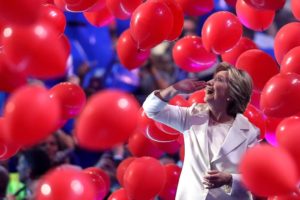 And then the balloons began to fall from the ceiling and everyone was cheering. You could see something was happening up on the stage, but, you know, not really make it out. And then there was this tearing noise and a gunshot. And I thought, “Someone shot her! Someone has shot the first woman President!” Everyone started screaming and running for the exits. People were being trampled. I… I… There was a woman on the floor of the auditorium and I…

It was deafening. The noise of the crowd. Panic in an enclosed space. There were plenty of exits but no one was moving. Everyone was crying. And even over the crowd you could hear this… I don’t know what it was… like when your crack your knuckles, but like enormous knuckles. And then a high-pitched noise like child’s scream. All the balloons on the floor popped at once. I looked back at the stage and there was this… I don’t know… thing hanging in the air. Like writhing in the air. I could smell burnt meat and electricity.

The crowd started pushing again, trying to get out. And there were all these gunshots. Hundreds of them it sounded like. It was the guards outside. The fucking security guards. They were shooting anyone who made it outside. They were keeping us in there. 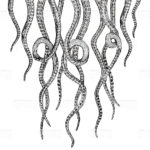 I approached it like any other deal to be made. They had something I wanted and I had a medium of currency that they would accept for it. I knew that all I had to do who find common ground and trading could begin

I began with Shub-Niggurath. She was a woman just like I was. A mother. She might have been the black goat of the woods with a thousand young but that didn’t mean we wouldn’t share the experience of giving birth, of nurturing a child and watching them grow, or the disappointment in finding that our monstrous offspring turned out looking like their hideous father.

Surprisingly, it was Huma that introduced me to Iram, the city of pillars, the ancient center of Shub-Niggurath worship. It wasn’t easy to get away, of course. It took a huge sum of money and careful coordination of my schedule to get away from press, but Huma is a genius at exactly that sort of operation.

Deep in the Crimson Desert, we sought the sunken pillars of the city that had been damned by God. When the guides announced our arrival, it looked like any other patch of that endless wasteland. Huma drew a square in the sand with a carved femur and muttered the guttural words from the tattered scrap of manuscript I had bought from the crippled German.

The sand shuddered and parted to reveal a black glass staircase that descended into darkness. We killed the guides and walked hand-in-hand into the buried temple of The Mother.

Gross deep tissue damage. Most muscle groups are simply gone. What remains on the skeleton has been partially dissolved by some variety of corrosive. No tests on any of the other victims have been able to identify it. The closest thing anyone has come up with is that it might be some sort of gastric juices applied to the flesh to soften it for consumption. Most of the major bones have been split lengthwise and the bone marrow is gone. With the head pulped and the skin missing, identification of the body will be impossible unless we get lucky with DNA.

The fact remains that Hillary was ELECTED FAIR AND SQUARE. No matter what she did AFTERWARDS, she must be allowed to take office. If the KKKGOP want to impeach her they are welcome to try.

I DON’T CARE WHAT SHE IS, SHE’S STILL MY PRESIDENT!

What are Hillary’s Chances of a Second Term? Is America ready to vote for a black cloud of gibbering tentacles? Has her ravaging of the East Coast hurt her with the Democratic base? Will the constant rain of blood in Ohio depress voter turnout?

These are my links. There are many like them but these links are mine. My links are my best friend.…

Happy Wednesday. Its a damn slow news day. Y'all may have to entertain yourselves in the comments. Kentucky Man not…