Wartimus Riesigmann and The Colour From Out of Time: A Warty Hugeman Tweenage Time Travel Adventure: Chapter Three 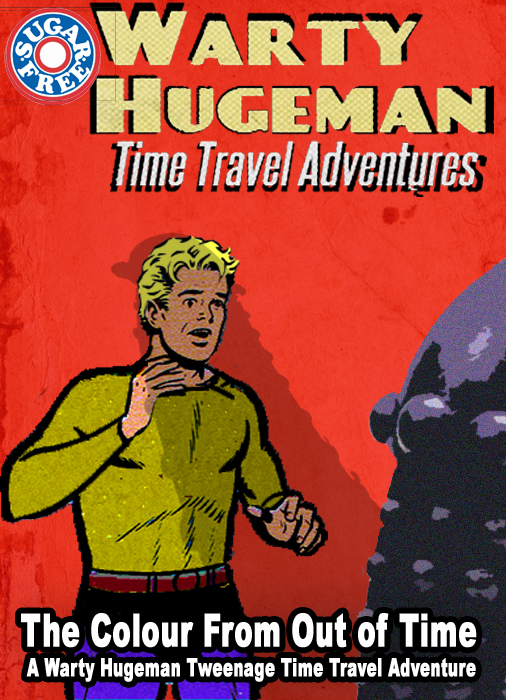 Courtesy of the masterful CPRM

Under cover of stand trees, Wartimus looked his communicator and disabled the audible alarm. “Back to the house,” he grunted, “Someone is attacking the estate.”

The two boys began to run through the woods together, zig-zagging to elude the helicopter’s questing light. Wartimus estimated they were close to halfway back when the helicopter shut off its searchlight and quietly turned back in the direction of the crater. He and Simon crashed to the ground.

“Are they gone?” Simon gasped as Wartimus checked the communicator again.

“No,” he said in a rough whisper. He began flipping through the security camera feeds. “The far west wall has been explosively breached and there are several large armored vehicles in the front yard.”

“I don’t know,” Wartimus replied absently, typing out a message for his father.

“It’s bigger than your entire forearm!”

The message to his father came back as undeliverable.

Simon dug in his backpack noisily and brought out a flashlight. Carefully shielding the lens with his fingers, he turned it on.

“And there’s some sort of socket on the end. Metal. A metal socket,” he said.

“Simon, there are armed men on the property. It doesn’t matter.”

“Simon, we’ve got to get back to the house,” he said. He stood and shrugged out of his backpack. “Leave your pack. We’ve got to travel light. Even the flashlights, Geiger, everything.”

“We can come back and get them in the morning.”

“We’ll just walk the rest of the way. We need to be quiet and keep our eyes peeled.”

As they started off, Simon used the nickname he used so rarely and asked, “Warty? Why do you do think it’s purple?”

“Simon,” Wartimus hissed. “We have to get back to the house.”

“Maybe you better hold on to it,” Wartimus said and tossed it back with a shudder of revulsion. It seemed to slap itself in Simon’s hand.

“It knows you, Warty Hugeman,” Simon said in a distant voice. “It thrills at your touch.”

Wartimus blinked a few times and then turned for the house without bothering to check if Simon was following.

Wartimus crouched at the edge of the forest and lawn. Three helicopters hovered over the house, their spotlights playing over it, not bothering to run silently like the one that had followed them from the crater. Someone on board was shouting over loudspeakers, words that just ended up sounding like the feedback howls of faulty equipment. He hailed his father on the communicator, the network connection stronger here. Either the attackers were blocking communications on the estate or his father was blocking theirs to hinder coordination. Maybe they were both pumping electronic chaff into the air. He set the communicator to scan for active channels.

“Get down, Simon,” he told his friend.

Simon ignored him and stepped out of the edge of the woods and onto the manicured expanse of lawn.

“SIMON!” Wartimus called but the boy continued walking at an unhurried pace. One of the spotlights on the helicopters picked him out. All three angled away from the house and came to hover over the boy, the grass flattened around him in three huge overlapping circles.

Wartimus’ communicator squealed angrily over the cacophonous noise of the helicopters and lit up. He had to jam it close to his ear and heard a babble of unfamiliar voices.

“The readings are clear!” someone said, the sound of helicopter blades echoing strangely. “He has the out-time object!”

“Who the fuck is this?” Wartimus screamed into the communicator.

“Take him!” the voice said, just an angry crackle.

“STAY RIGHT WHERE YOU ARE!” the helicopter loudspeakers shrieked. “WE WILL USE LETHAL FORCE!”

Simon stared up into the sky unmoving.

“SIMON!” Wartimus screamed again, useless in the hurricane of sound. He broke from the wood line on instinct, running toward Simon. He covered the distance in seconds, his muscular legs tearing up clumps of grass as he accelerated. He tackled Simon and covered him with his body.

“You’re going to get yourself killed!” he yelled in Simon’s face.